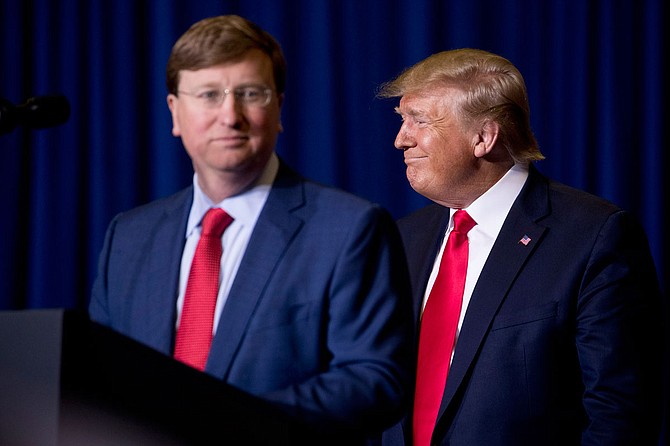 President Donald Trump's visit to Tupelo, Miss., to campaign for Tate Reeves may not have helped Republicans across the state as much as the GOP hoped, one of the state's top strategy and polling firms says. Photo by Andrew Harnik via AP

President Donald Trump's visit to Tupelo earlier this month may have boosted Mississippi Democrats more than Republicans in the northeast part of the state, Chism Strategies, one of the state's top polling and political strategy firms, says. The president's Nov. 1 visit boosted Republican voter turnout in Northeast Mississippi by 5%, but gave Democrats in the region a 12% boost, the firm's Brad Chism wrote in an "Open Letter to Mississippi Democrats" late last week.

"President Trump is a double edged sword ... . He is a powerful reminder to base Democrats when our local candidate may be less exciting," Chism wrote.

Chism is a progressive firm that supports Democrats. In the letter, Chism stressed that Trump remains highly popular among white Mississippians.

"Mississippi is an R+9 state in federal elections and with President Trump’s approval among whites in our state — 70% and climbing amid the impeachment controversy — Tate Reeves used the national Democratic brand to pommel Hood incessantly. Reeves’ mantra of 'God, gays, guns, illegal immigrants…' was very effective," Chism wrote.

'A Great Job of Messaging'

While Republicans won in Mississippi, losses followed Trump's recent visits to help GOP gubernatorial candidates in two other southern states. In Kentucky, incumbent Republican Gov. Matt Bevin lost on Nov. 5 just after an election-eve rally with Trump; Trump later suggested Bevin lost because he was a bad candidate, but would have lost by a much larger margin without him.

Over the weekend, Louisiana elected Democrat John Bel Edwards to a second term after Trump paid three visits to the state to help GOP nominee Eddie Rispone. That was the first time in decades that a Democrat won a second term in the state. Edwards initially won his first election in 2015 after Republicans nominated David Vitter, a candidate embroiled in scandal over his solicitation of sex services from the "D.C. Madame" when he served in Congress.

One Republican political operative who works on campaigns in both Mississippi and Louisiana told the Jackson Free Press that he thinks it was less about Trump and more about the fact that Edwards' incumbency gave him an advantage that Hood did not have. Edwards was also able to point to the unpopularity of the state's last GOP governor, Bobby Jindal, and tie him to Rispone.

"John Bel Edwards did a great job of messaging to let voters know how terrible of shape the state was in as a result of Bobby Jindal's administration and how much better off the state is now four years later. ... Phil Bryant was relatively popular to Mississippi Republicans, and they were content to continue that trend," the operative, who asked not to be identified, said.

Edwards' decision to expand Medicaid in the state, which Jindal had blocked, proved popular in the state, after it opened health-care access to more than 470,000 Louisiana residents. A study since found that expansion "led to a $1.85 billion direct economic impact" in the first year, helped the state save $317 million, and created 19,000 new jobs.

Hood and other Democrats campaigned on expanding Medicaid in Mississippi this year, but Reeves loaded mailboxes and airwaves with ads describing it as "socialism" and "Obamacare expansion."

While Hood and every other Democratic candidate statewide lost, Chism pointed out some "silver linings"—including Democrat Hester Jackson-McCray's defeat of an incumbent GOP Mississippi in a DeSoto County House District that Republicans won by 36 points in 2015.

"For the first time ever, we have an African American woman representing a majority white district in Hester Jackson-McCray," the letter says.

"This win is in line with nationwide trends of the suburbs reject the Trump agenda and voting more Democratic," Jackson-McCray said in a press statement after her victory.

While Republicans swept all statewide races for the first time since the late 1800s, Democrats overall saw improvement. Johnny DuPree, who ran for secretary of state this year, was the party's nominee for governor in 2011. This year, he improved his margins by five points or more in 16 counties, Chism says. In the 2011 governor's race, DuPree lost to Republican Phil Bryant by 22 points—a significantly worse performance than Hood's 5.7-point loss.

Mississippi Democrats made gains in other suburban parts of the state, too, Chism notes. Hood's win in the City of Clinton—which has a Republican mayor and all-GOP board of aldermen—"illustrates the potential for white crossover vote," Chism wrote. Hood also won Madison County, which includes wealthier and whiter suburbs outside Jackson, marking the first time a Democrat has won there since 1987.

Hood broke a 20-year losing streak for his party when he won Lafayette County, which includes Oxford and the University of Mississippi.

In the letter, Chism suggests Democrats ought to focus more of their efforts in statewide races on the Jackson metro area, which accounted for 22% of Hood's support. When Democrat John Arthur Eaves ran in 2007, it accounted for just 16% of his support.

Chism urged Democrats to focus on building the party on the local and county levels—and warned of catastrophe if they do not.

"Democrats don't have a solid bench for statewide candidates in 2021. We must be creative in where we pick our battles and the most promising initial outcomes are with the limited number of local government races over the next two years," Chism wrote. "Special elections in swing districts should become priorities. Democrats need to find a way to win again—no matter how small the race—given this new political landscape. Winning can be contagious. And sadly, if we continue to ignore the new realities, losing will be too."

CORRECTION: The original headline for this story read, 'Trump's Tupelo Visit Helped Dems More Than GOP in Mississippi, Strategist Says.' It has been updated to clarify that Chism strategies was referring to northeast Mississippi—not the state as a whole.