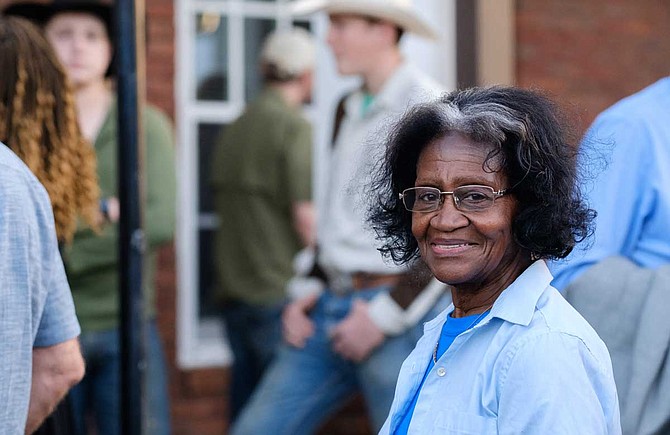 Coe Alice Sturgis, 82, testified against the proposed Enviva wood pellet mill in George County on May 14, 2019. Photo by Ashton Pittman.

LUCEDALE, Miss.—At age 82, Coe Alice Sturgis had never attended a public hearing, nor had she taken part in any environmental activism. Last week, though, the lifelong Lucedale resident testified before her community against plans to build a new wood pellet mill not far from her home in George County.

"We have good, clean air here in George County, and, as citizens, we need to keep it that way," she told the Jackson Free Press on May 14. About 200 residents showed up at a hearing in town with the Mississippi Department of Environmental Quality, or MDEQ, last Tuesday.

She decided to testify after receiving a call and an email from representatives of the Dogwood Alliance, a North Carolina-based environmentalist group that focuses on protecting forests, often pitting them against corporations in the lumber industry. The group wants to stop wood pellet manufacturer Enviva Partners, LP from building what promises to be the largest wood pellet plant in the world in Sturgis' hometown.

"I live in Durham, North Carolina, just about an hour and a half from three and soon to be four of Enviva's wood pellet facilities, and it doesn't take me long driving out to my home to be right in the overlapping sourcing areas of Enviva, to see the impacts of industrial logging, and see many of the logging trucks heading into Enviva's facilities," testified Rachel Weber, the forests and climate campaign director for the Alliance.

The activists say the Enviva plant is a threat to the health and wellness of George County residents, and that it is also harmful to the climate.

'What Really Moves the Money is Timber'

But George County Community Development and Communications Director Ken Flanagan told the Jackson Free Press that he does not share those environmental concerns.

"I have personally been to three of their operations, and granted, I'm not a scientist and I'm not pretending to be one," he said. "But personal observations still mean something, and I can tell you I have been to where the pellets drop and where they load into cars and how they're mashed, and as far as industrial projects go, I have never seen a cleaner industrial project."

The project, he said, would revitalize George County's waning timber industry that was booming just two decades ago. County leaders began work on bringing the project to Lucedale in 2014.

"When you really look at George County's economic base, what really moves the money is timber," he said. "People view timber here like other people think of their 401k. It is their family's inheritance; it is their saving account. And that's not how we think about it, but that's how timber folks think about it. With Enviva and their management program, where you have to cut and regrow the timber, it is going to do something for this timber market that hasn't been done since 2000."

Enviva has promised residents a boost not only to their local economy with about an additional 90 full-time jobs, but in tax revenue and funding for local schools.

"There's almost no negativity here at all in my opinion," said Mississippi state Rep. Manly Barton, a member of the state Senate Transportation Committee. "This is a renewable source of energy. People talk about renewable sources of energy? Well, this is one. This is growing pine trees, using them and growing them again. It's really good for this community, though."

Barton, who said his work as a former Chevron employee gave him insight into emissions control, said local and state authorities would closely monitor Enviva's plant to make sure its emissions stayed in compliance.

"If they get out of whack or if something is not correct, they have to shut down the plant until they fix that," he said.

For years, companies like Enviva have promoted biomass, or forest wood, as a low-carbon, renewable energy alternative to fossil fuels. The use of biomass in the form of wood pellets has spread like wildfire across Europe in the past 20 years, particularly in the United Kingdom. Last year, though, a panel of lawmakers in the U.K. parliament urged the government to move away from using wood pellets after a series of studies found biomass may not be as clean as its producers and proponents have advertised.

In 2018, U.S. Environmental Protection Agency head Scott Pruitt pledged to classify wood pellets as renewable energy like wind or solar power. But William Schlesinger, a biogeochemist who is on the EPA's advisory board, criticized the decision last June.

"Philosophically it looks good but practically it looks pretty bad in many cases," Schlesinger told The Guardian last June. "When you cut down existing trees and burn them, you immediately put carbon dioxide in the air. None of the companies can guarantee they can regrow untouched forest to capture the same amount of carbon released. The whole renewable forest industry is kind of a hoax in terms of its benefit as climate mitigation."

But although the Enviva plant would use thousands of acres in George County each year, the trees used for the wood pellet mill in George County would be trees that were grown specifically to be cutdown, not centuries-old forests, Barton told the Jackson Free Press on May 14.

"In this area, George County, Green, Perry and even Jackson County, there's a large amount of land that was put in pine trees for the paper-mill industry, for the pulpwood industry, for a lot of industries that have since gone south," he said. "These trees were there as a crop to sell. The industry has changed a little bit, and the demand has changed, so a lot of those property owners now have pine trees where they used to have something else. And if they can't find a way to sell them, because this is a crop, they're going to cut them down eventually and plant something they can sell, whether it's corn or soybeans or something else."

Bill Little, Enviva's vice president of construction, told the Jackson Free Press on May 14 that the Lucedale plant would be "the world's largest, most technologically advanced pellet mill." The area, he said, is economically depressed and "could use a boost in the economy."

"We're building the most technologically advanced emission control plant using the best available technologies complying with the permit," he said. "I'm an Enviva employee, and I respect the democratic process, and they've got every right to disagree."

State Sen. Dennis Dunbar, a Republican who represents George, Greene and Wayne counties, said he knows about the environmentalists' concerns but emphasized that the mill would bring in around 90 full-time jobs, and indirectly help create an additional 100 jobs in the area.

"I understand everybody has got a place in this world, but you're in an area where forestry is the biggest industry next to chickens, next to poultry," he said. "This is needed for our area. The forestry market has been depressed for several years now, and this is going to revive that market and help our local loggers and our forestry association and all the people that can support it."

During this year's legislative session, lawmakers appropriated $2 million that will help the project by building an industrial rail spur to allow Enviva to transfer the pellets from the Lucedale mill to the port in Pascagoula, Miss., for shipment overseas. Gov. Phil Bryant and other state leaders supported the decision, Dunbar said.

To build the plant, Enviva wants millions in tax breaks that they say will spur George County's economy. At the hearing on May 14, though, Dogwood Alliance Campaigns Director Rita Frost cautioned that it could cost Mississippi taxpayers and leave them "high and dry" if the public tide continues to turn against biomass in Europe—one of the prime importers of wood pellets from the U.S.

In March, plaintiffs from six countries that manufacture wood pellets challenged the European Union's classification of biomass as "carbon neutral" and "renewable energy," saying that it increases the very carbon emissions the E.U. claims it cuts down on.

In a November 2018 press release from the EPA, the agency made clear its belief that biomass, or bioenergy, should be treated as carbon neutral. U.S. Department of Agriculture Secretary Sonny Perdue claimed that it is not only good for local economies, but can help prevent forest fires and improve the health of forests.

"Responsibly using the fuels from our forests is both good for the environment and good for struggling rural economies. Multiple studies have found that demand for wood products, including wood for energy, actually serves to promote investment in forest management and helps to maintain or increase the amount of land in forests," Perdue said.

'I'm Not Going to Call Right or Wrong'

At the May 14 hearing in Lucedale, Weber read a letter from Debra David, of Richmond County, N.C., and Jane Thornton, of Sampson County, N.C. Both live near Enviva plants in North Carolina.

"Enviva's wood pellet plants bring air pollution, 24/7 noise, and truck traffic that tears up local roads," the letter reads. "The dust and pollution from this type of facility has been linked to respiratory illness, heart disease, and cancer. In Sampson County, Enviva's plant lacks proper pollution controls, and they recently paid a fine for violating air quality regulations."

"Burning biomass can emit recognized air pollutants, including particulate matter and other carcinogens, which cause premature death and endanger respiratory health," the paper said. "If biomass is combusted, state-of-the-art pollution controls must be required."

On May 14, the Jackson Free Press asked Little if he believes the environmentalists who showed up to oppose the new planet are incorrect in their concerns.

"I'm not going to call right or wrong," he said. "I'm just going to let the data drive the decisions."