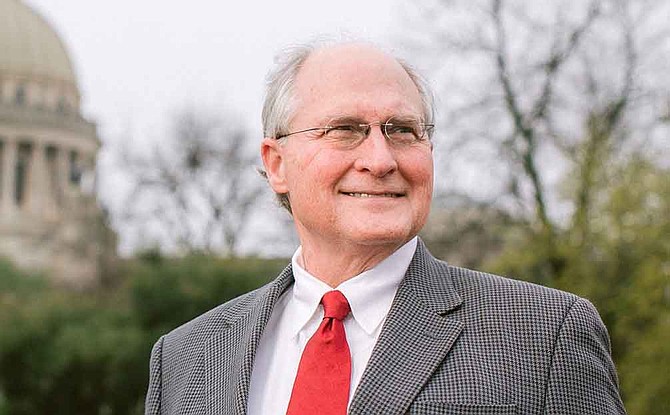 Bill Waller, a Republican candidate for Mississippi governor in 2019, announced that his campaign exceeded fundraising expectations in its first two months. Photo courtesy Waller for Governor

Republican Bill Waller raised more than half a million dollars in his first two months in the race for governor, his campaign announced in a press release on Tuesday.

Waller, the former Mississippi Supreme Court Chief Justice, surpassed his initial fundraising goal, bringing in more than $580,000 from 700 donors since he joined the race.

Other campaigns will not release their fundraising totals until tomorrow, but Waller's top opponent, Lt. Gov. Tate Reeves, boasted a $6.7 million cash war chest at the start of 2019. In 2018 alone, he pulled in $1.7 million. Still, Waller only joined the race on March 1, and unlike Reeves, he has not had the benefit of years of fundraising.

Waller and Reeves' other opponent, state Rep. Robert Foster, is a 36-year-old farmer from DeSoto County with a millennial knack for social media. Voters first elected him in 2015, but even without years of experience in state government and high-dollar connections, Foster has managed to amass a following of more than 22,000 supporters on Facebook, where he's known for openly sharing his thoughts—sometimes in bombastic ways. In one Facebook post on Tuesday, he suggested that his first-quarter haul will be substantially lower than his opponents.

On Thursday morning, though, he told the Jackson Free Press that he sees his social-media platform as his secret weapon.

"In 2019, I believe social media, along with a heavy grassroots ground game, can compete with TV, direct mail and other sources of paid media to level the playing field in politics," Foster said. "If that time is now, then having an actual plan to help our economy will prevail over special interests and their bought-and-paid-for politicians that seem to only be focused on keeping the status quo. I am attempting something that has never been done in a Mississippi statewide election."

When the GOP candidates face off in the Aug. 6 primary, Foster said, "we will see if policy will overcome politics as usual."

"If the people are ready for a businessman with an actual plan, then I'm giving them an option," he said. "If not, I'll go back to my farm and business."

While Reeves is typically seen as the establishment candidate with the best shot, Waller boasts the support of four former heads of the Mississippi GOP and other party leaders. From 1972 to 1976, his father served as the state's Democratic governor at a time when many conservatives, who would later become Republicans, still remained in the Democratic Party.

Spoiler alert: I won’t have millions in the bank come Friday when campaign finance reports are released. In fact, I don’t want it, because there are huge strings attached to money like that. #msgov

Robert Foster suggested on social media that his first-quarter haul will be substantially lower than his opponents.

"The outpouring of support for Bill Waller in such a short amount of time is exciting to see, and it's a sign of real momentum building all across the state," said Waller finance committee member Leland Speed, whose father of the same name was the Republican mayor of Jackson from 1945 to 1949, in the campaign's May 7 press release. "Bill Waller is focused on finding conservative solutions to the challenges facing Mississippi, and more and more people are joining the campaign every day. We will continue to work hard to ensure he has the resources needed to deliver his message to all voters."

"I saw firsthand what it takes to be a successful Governor, and that's why I'm supporting Bill Waller," said finance committee member Dan Fordice, son of the late Gov. Kirk Fordice. "Bill Waller is not afraid to talk about big issues that matter for the future of our children and grandchildren. I appreciate his straight talk and leadership abilities that we need at this important time for our state."

None of the Democrats in the race have released fundraising numbers yet, but Attorney General Jim Hood, who is seen as the favorite for the nomination, announced in January that he had more than $1 million cash on hand. He raised a little more than $700,000 last year.

Both party's primaries will take place on Aug. 6. In Mississippi, voters must register 30 days before an election to be eligible to vote and must show an accepted form of photo ID at the polls.