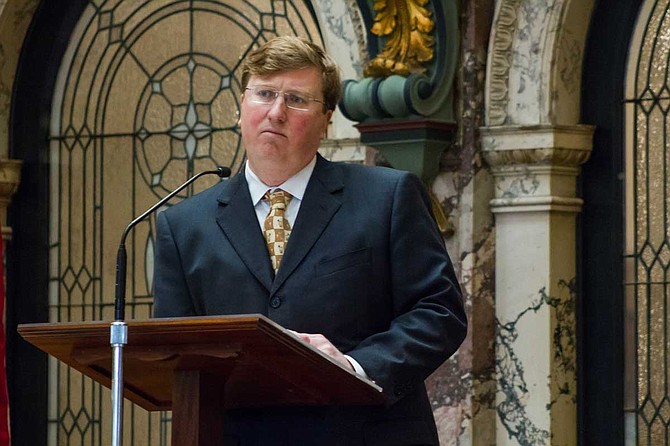 Reports filed Monday show Reeves continues to lead all candidates in fundraising, with $6.3 million in the bank at the end of May. He raised $566,000 last month and spent nearly $1 million. Photo by Stephen Wilson.

JACKSON, Miss. (AP) — Republican Lt. Gov. Tate Reeves has five times as much cash to spend in the final five months of the governor's race as his best-financed opponent, and he's already spending at a rapid clip.

Reports filed Monday show Reeves continues to lead all candidates in fundraising, with $6.3 million in the bank at the end of May. He raised $566,000 last month and spent nearly $1 million.

Attorney General Jim Hood, the Democratic front runner, continues to far outpace six others seeking the party's nomination. He raised $210,000 in May and has $1.2 million to spend. Of the six other candidates remaining on the Democratic side, four didn't file reports, including Velesha Williams of Flora. Hinds County District Attorney Robert Shuler Smith raised $3,400 and reported $1,715 on hand.

The gap shows in the size of the organization that Reeves has already built. Spending records show 39 people collected paychecks from the Reeves campaign last month and that he's spent $1.26 million so far this year with media firm OnMessage of Alexandria, Virginia. Waller, by comparison, paid six campaign workers in May and has spent less than $100,000 so far this year with his main campaign consultant.

Among other statewide candidates, Republican Delbert Hosemann led all fundraisers, collecting nearly $260,000 in May. Now secretary of state, Hosemann is running for lieutenant governor and has $2.9 million to spend after spending almost $260,000

The only Democrat running for lieutenant governor, state Rep. Jay Hughes of Oxford, has been largely self-funding his campaign, spending $81,000 in May while raising $12,000. Hughes said he's aiming to change that equation.

"We started raising money on June 1 because I'm tired of spending my own money," Hughes said.

Republican Gov. Phil Bryant cannot seek a third term. The last time Mississippi had a governor's race without an incumbent was 2011, when Bryant won his first term after serving one term as lieutenant governor and a dozen years as state auditor.