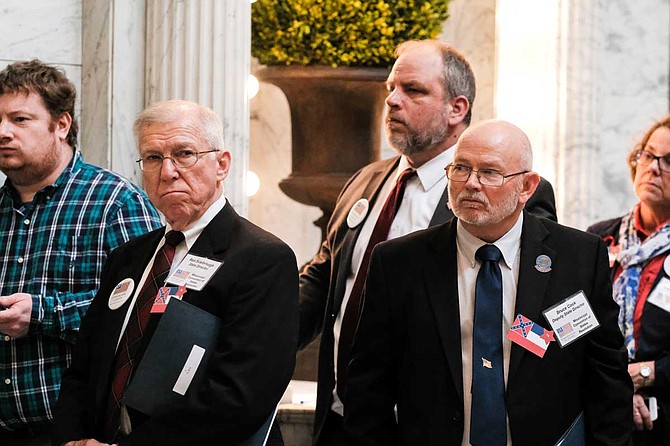 Ron Scarbrough (left) and Bruce Cook (right) are the lead organizers of Citizens for Self Governance, the group pushing for a Convention of the States in Mississippi. Photo by Ashton Pittman.

JACKSON — Civil-rights protections could be "rolled back" if Mississippi joins a conservative group's effort to amend the U.S. Constitution, a prominent civil-rights organization is warning.

On Thursday, the Mississippi Senate passed a resolution calling for a new constitutional convention. It would be the first since the original convened in 1787, and would grant representatives from all 50 states broad power to write or even rewrite the U.S. Constitution. Already, 28 have called for a convention, drawing the proponents close to the two-thirds necessary.

Last month, Sen. Angela Burks Hill, the Picayune Republican who is the lead sponsor of Senate Resolution 596, told the Jackson Free Press that she and other proponents are focused on limiting federal power, and have no intention of rolling back civil rights.

"I see a runaway federal government, and I see the opportunity that the founders gave us in the Constitution to reclaim the powers that belong to the state," she said at the Capitol on Feb. 21. "And I try to keep our federal government from going bankrupt, which I don't think Congress has any intention of doing right now."

But Jody Owens, who heads the Mississippi branch of the Southern Poverty Law Center said curbing federal power would threaten civil rights in states like Mississippi, where slavery, segregation, and prohibitions on women's rights and LGBT rights only ended following federal intervention.

"In Mississippi, historically and now, we know that far too often the federal government has been the lynchpin that has brought out equality in states like Mississippi that needed motivation," Owens said. "It is our position that any bill that would roll or even have a possibility to roll back those fundamental Constitutional rights are bad for all Mississippians."

A Texas-based group, Citizens for Self-Governance, or CSG, is behind the push for the resolution. CSG is responsible for resolutions in 13 states that call for a constitutional convention to specifically address four of the group's priorities: curtailing the national debt, limiting regulations on business and industry, stopping federal "attacks" on "state sovereignty" used to impose a "radical social agenda," and what it calls the "federal takeover of the decision-making process" by the courts and the executive branch.

Other right-wing and left-wing groups have also backed calls for a convention in other states.

In June 2016, Bruce Cook, who is one of the leaders of the Mississippi branch of CSG, told attendees at a Mississippi Tea Party gathering that the U.S. Supreme Court was pushing "a radical social agenda."

"The Supreme Court has become a political agency, and we're hanging by a thread right now," he said.

Conservatives have long complained similarly about the Supreme Court, going back to its 1954 ruling that struck down school segregation, and continuing with rulings like the one in 1973 that declared abortion a constitutionally protected right and its 2015 ruling that ended state prohibitions on same-sex marriage.

In Mississippi, conversations about "state sovereignty," encroachment by the federal government and "radical social agendas" inevitably, whether intentional or not, evoke the language of the state's past. Here, southern whites defended everything from slavery to Jim Crow to school segregation by making arguments for "state's rights" and "state sovereignty."

From 1956 to 1977, Mississippi governors used the taxpayer-funded Sovereignty Commission to defend segregation and to collaborate with local law enforcement to spy and clamp down on civil-rights activists, even orchestrating firings and evictions to convince them to give up their activism.

Curtailing civil rights, Hill told the Jackson Free Press, is "absolutely not" what the resolution is about. Under Article V of the Constitution, three-fourths of state legislatures would need to ratify any amendments the delegates pass at a constitutional convention for them to become law. She said that would make it unlikely that an amendment highly offensive to the right or left, like the watering down of civil-rights protections, would pass.

"This is not the intent of this convention," she said. "It's not even in the parameters of what we're trying to accomplish here. And I don't think you're going to see 38 states taking civil rights away from people."

Last year, the Mississippi House passed CSG's resolution for a constitutional convention, but the bill died after a Senate committee declined to take it up. Now, in an election year, the Senate has passed the resolution, which heads to the House.

"We saw in previous years that this bill was killed by the same leadership because they knew that this was a bad bill," Owens said on Thursday. "But what I think we've seen is pressure from groups directed at the lieutenant governor and others that they have to be out on issues like this because the far right tells them it's important."

Lt. Gov. Tate Reeves, who presides over the Mississippi Senate, is a 2019 candidate for the Republican nomination for governor.

"I don't like it when people shirk their responsibilities," West said, speaking to a group of Mississippi conservatives in a video that CSG supporters spread across social media earlier this month. "I don't like it when people have misguided priorities. And I just wonder if the lieutenant governor will be able to look at himself at the end of the day in the mirror knowing that he could not find two minutes. That's not courage. That's not what built this country."

"Ask yourself about these elected officials" before giving them your vote, West told the crowd.

"Where is the competence? Where is the commitment? Where is the conviction? Where is the character to stand up and say that they represent you? Put them to the test," West said. "Because I tell you right now, the person that is sitting in the office as lieutenant governor of Mississippi, he failed that test for me today."

At press time, Reeves' office had not yet responded to a request for comment.

'Abortion and Same Sex Marriage Have Ripped This Country Apart'

Joining West at the Capitol last month was CSG's national leader, Mark Meckler. In 2009, Meckler co-founded the Tea Party Patriots, one of numerous groups that formed under the Tea Party banner as a response to President Barack Obama's election.

Last month, Meckler spoke at the Mississippi Capitol, where he sought to frame CSG's effort as a bipartisan cause. But posts on the organization's Convention of the States Facebook page make its ideological bent clear, with attacks levied against the Environmental Protection Agency, universal-health-care proposals, New York Democratic Congresswoman Alexandria Ocasio-Cortez and Democratic House Speaker Nancy Pelosi.

In a 2015 blog post on its lobbying arm's page, CSG suggested that a convention of the states could help overturn the U.S. Supreme Court's 2015 ruling that legalized marriage for gay and lesbian Americans nationwide, undo rulings upholding the Affordable Care Act and undo Roe v. Wade, which legalized abortion.

"Abortion and now same-sex marriage have both ripped our country apart," the blog post reads. "On both of these issues, if it had not been for Supreme Court intervention, the law would vary from state to state as the people of the state desired."

A convention, CSG implied, would disempower the U.S. Supreme Court from making such rulings and return those issues to the province of the states.

"The majority justices are not just foisting Obamacare or same-sex marriage on us," the blog post reads. "The Supreme Court of the United States is systematically denying the American people the right of self-government."

Left up to conservative states like Mississippi, of course, abortion and same-sex marriage would still be illegal; yesterday, Mississippi Gov. Phil Bryant signed a new law that bans abortions after six-weeks. Already, opponents have promised to sue to stop it from taking effect.

In recent years, at least one left-wing group has pushed for a constitutional convention, too, although for different reasons. In its 2010 decision in Citizens United v. Federal Elections Commission, the U.S. Supreme Court struck down decades of campaign finance law that had limited the amount of money wealthy interests could donate to political action committees, or PACs. That made it easier for vested interests to pour money into political efforts without disclosing their identities.

After that, a group of left-wing activists began Wolf-PAC, which has raised more than $650,000 to support efforts to push blue states to pass resolutions calling for a convention to amend the Constitution and overturn the Citizens United decision.

On Thursday, though, Owens said it would be "hypocritical" of him to support that effort. A convention of the states, no matter who is pushing it, he said, could be disastrous, because there is no way to limit what changes delegates could make at a convention once it starts. In today's climate, he said, there is no guarantee that what would come out of a new convention would even be as progressive as the Constitution of the late 1800s after the Civil War.

"We've seen that happen in Mississippi itself," he said. "If you look at the Constitution of Mississippi enacted after the Civil War, it's continually been amended to hurt public education," he said. "My concern is that we can't be a lawless nation. We have been protected by these provisions for too long to give them away. Are you for public safety? Are you for equality? Are you for public education? If so, then why would you be willing to sign on to something like this?"

Owens is a 2019 candidate for Hinds County district attorney.