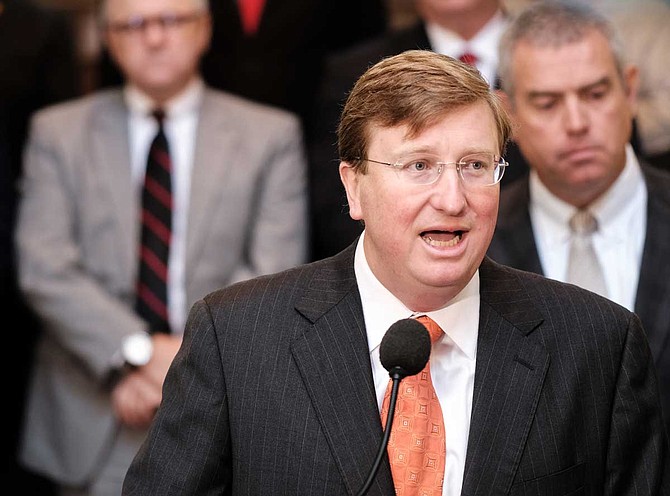 Politicians like Mississippi Lt. Gov. Tate Reeves, a Republican candidate for governor, have made opposition to abortion a key part of their 2019 campaigns. Photo by Ashton Pittman.

JACKSON—Mortality rates for Mississippi's teens and children have risen in the past nine years, a report that the Annie E. Casey Foundation published on Monday found.

"Poverty is connected to children's health and education, and disproportionately impacts children of color," said Linda Southward, who is co-director of Mississippi Kids Count, in a press release on June 17. "Given the changing demographics in Mississippi, we have children who are more likely to be disenfranchised economically, which reinforces the importance of looking at children's issues through an economic lens."

The report comes in the midst of a statewide campaign season loaded with talk about abortion rights, as federal courts consider challenges to Mississippi's recently passed law that bans abortions at around six weeks gestation.

"I've said it before, and I will say it again, abortion is evil," Lt. Gov. Tate Reeves, a Republican candidate for governor, told supporters at an event on May 21. "It is the greatest evil of our time. ... It is a moral issue. It is good versus evil; it is right versus wrong. This is not an issue for compromise."

His likely Democatic opponent in the November general election, current Attorney General Jim Hood, is defending the law in federal court. Hood, who describes himself as pro-life, has not taken a stance on the merits of the law itself as a campaign matter.

While Reeves' campaign emphasizes his "pro-life" positioning on abortion, though, Reeves has not made an issue out of the state's high infant, child, teen and maternal mortality rates. Pregnant women already die at higher rates than in most of the country, and the state is near the top in infant mortality.

The Reeves campaign did not respond to a request for comment on Wednesday afternoon.

When the Jackson Free Press reached out to the Mississippi State Department of Health about the high maternal mortality rate in May, perinatal consultant Charlene Collier (perinatal refers to around the time of birth) cited "a disturbing racial disparity," with black women being nearly twice as likely to die before or shortly after giving birth.

As of 2017, Mississippi led the nation in deaths among infants.

At a rally outside the Mississippi State Capitol in protest of the six-week abortion ban on May 21, American Civil Liberties Union Communications Director Zakiya Summers criticized politicians for not doing more to lower those numbers.

"We must use our civic duty and our constitutional responsibility to elect leaders who value women and who value families," she said.

In the MSDH statement to the Jackson Free Press on May 13, Collier suggested that Medicaid expansion could help lower the state's maternal mortality rates.

In 2012, the Supreme Court ruled that states could opt out of expanding Medicaid, a key part of the Affordable Care Act. Many Republican-controlled states, including Mississippi, did so, with Gov. Phil Bryant refusing billions in Medicaid expansion funds under former President Barack Obama's signature law.

That decision left about 300,000 Mississippians with no affordable health-care options, either because they made too much for traditional Medicaid or too little to qualify for ACA subsidies.

"Mississippi did not expand Medicaid, so there may be additional opportunities to provide primary health care to women before and after they have their babies so that they can better manage the medical conditions that often lead to pregnancy complications like uncontrolled hypertension and diabetes," she said.

From the first day he launched his campaign last fall, Hood has advocated for Medicaid expansion. Reeves, on the other hand, has stood firmly against it, deriding it as "Obamacare expansion."

In January, Reeves shut down rumors that the Legislature might opt to expand Medicaid this year.

News in the recent Kids Count survey was not all bad for Mississippi, though. Fewer children live in poverty today than nine years ago; however, Mississippi's childhood poverty rate still remains significantly higher than the national rate.