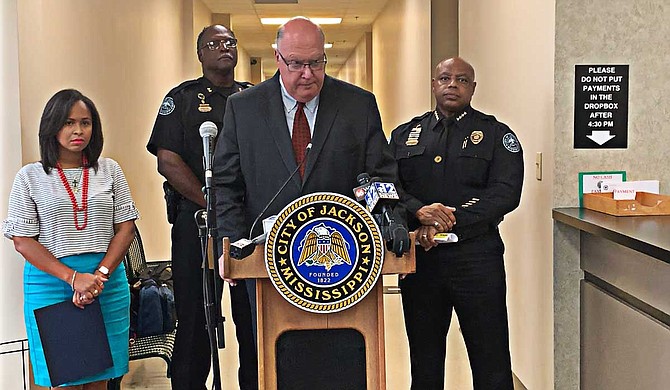 Bob Miller, director of public works, announces the City of Jackson's investigation into water tampering affecting the city and its customers at a press conference on June. Photo by Aliyah Veal.

JACKSON — Water customers have been cutting the wires to their meters or destroying them to purposely prevent the city from reading the meters, City Public Works Director Bob Miller announced at a press conference June 12. The City of Jackson is investigating its water and billing system, he said.

The City could not say how long the water tampering has been happening due to the ongoing investigation.

"We anticipate being able to divulge more information once the investigation is complete," Candice Cole, director of communications for the City of Jackson, told the Jackson Free Press.

Miller said that a combination of customer complaints, rumors and informal reports from employees pushed him to bring in investigators.

"We're getting statements from citizens. We also have photographic evidence, and we have enough that will make a sufficient and compelling affidavit that I'll be prepared to swear to and submit to the courts," he told the press.

The Director of Public Works said that though the investigation is still ongoing, they have also found that municipal employees may have advised customers on how to avoid their bills.

"Any employee who aids in the illegal avoidance of billing or aids in the tampering or destruction of a water meter is subject to arrest, imprisonment and a fine."

He said he has evidence that he will prepare in a sworn affidavit for the police and municipal court for prosecution. He advised employees who have any information to report it in writing to the public works director or else they could face "severe disciplinary action."

Miller could not comment on the exact number of customers and employees that were involved, but he said the amount is substantial. Penalties for water tampering include a fine not exceeding $1,000, a prison sentence no more than 90 days, or both under the Title 21, Chapter 13, Section 1 of the Mississippi code, he said.

The city of Jackson already has its hands full with its failed $90-million contract with Siemens, which has only ended in chaos with unpaid or expensive water bills for customers and revenue loss for the city. Mayor Chokwe A. Lumumba announced in a press conference on Tuesday that the city will sue Siemens and other subcontractors.

Miller said water tampering has had an effect on revenue loss, though he could not get into specific figures.

"It (the amount) is substantial and must be addressed now," he said.

He said the City of Jackson and the Water Sewer Business Administration takes this matter seriously.

"We will not sit idly by and let our residents or our city continue to be taken advantage of by bad actors who do not have the city's best interest at heart," he said.