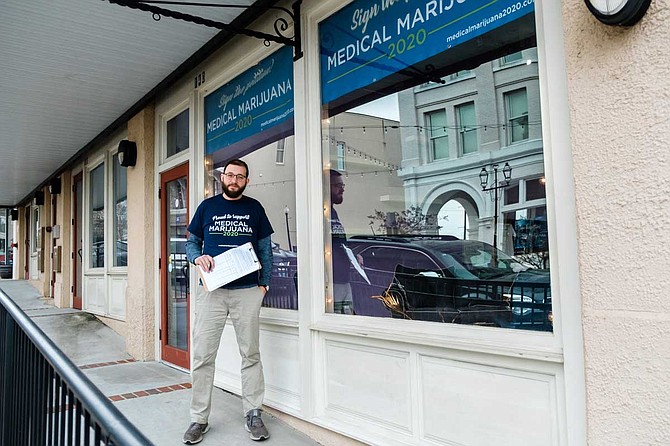 HATTIESBURG, Miss.—Medical marijuana in Mississippi is on pace to make it onto the ballot in the state next year, said Jonathan Brown, who is leading the signature drive.

From the group's grassroots organizing hub in downtown Hattiesburg, Brown said on Jan. 15 that activists are gathering hundreds and on some days thousands of signatures.

"We've got dozens of employees statewide," Brown said last week. "Most of them are working remotely. Our nerve center is here in Hattiesburg, but our folks are out from all over the state, from the coast to Corinth."

Earlier that morning, Brown had gotten word of a new survey from Millsaps College and Chism Strategies that found more than two-thirds of Mississippians favoring legalizing medical marijuana. Sixty-seven percent said they support it, while just 24 percent were opposed.

The Millsaps/Chism survey found that majorities support the initiative regardless of race, gender or political affiliation.

The broad coalition backing legalization for medicinal purposes does not surprise Brown. In November, his group traveled to Biloxi, where President Donald Trump was holding a rally for Sen. Cindy Hyde-Smith, R-Miss. There, they sought to collect signatures not only from Republicans who had shown up to see the president, but from anti-Trump activists there to protest his visit.

"We got to talk that night with a lot of people who have really strong opinions one way or the other, and we found pretty consistent support across the board," Brown said. "Almost everybody on the protest side that was a Mississippi resident signed our petition, but even when we sat in line for the president's rally, we had a huge contingent who still signed our petition. As soon as we highlighted Trump's support, we had a lot of support for that."

Last summer, Trump said that he would likely support a congressional effort to end the federal ban on marijuana.

The Mississippi initiative would not legalize marijuana for recreational purposes, and medical marijuana would be tightly regulated. Those with prescriptions for conditions like epilepsy, chronic pain or mental health conditions, for example, would not be able to drive while under the influence.

In the Millsaps/Chism survey, a majority of all age groups support medical marijuana—except those over 65. Among that group, 48 percent favor it. Brown said he has seen that dynamic at play while canvassing, but he has also seen older voters change their minds.

"You might expect senior citizens would be opposed, but senior citizens are the ones suffering the most from debilitating medical conditions that medical marijuana could be used for," Brown said.

"So as soon as we start talking about some of the benefits and conditions medical marijuana could be used to treat, senior citizens' ears perk up and they say, 'Hold up, I know somebody who deals with that,' or, 'I deal with that.' So with just a little conversation, we've had a huge number of older folks sign up for the campaign, because they've seen the potential that this medicine has to treat the things they're dealing with, or that their friend is dealing with."

Though legislators have not scheduled them for votes, lawmakers in the Legislature have introduced six marijuana-related bills, including several directly related to it.

Senate Bill 2358, which Sens. Derrick T. Simmons, D-Greenville, and Deborah Jeanne Dawkins, D-Pass Christian, introduced, would legalize medical marijuana, and likely render the voter initiative moot if it passed. That is unlikely, though, as legislators have generally signaled a willingness to let voters decide.

Meanwhile, Senate Concurrent Resolution 537, which Sen. Charles Younger, R-Columbus, introduced, would write protections for the use of medical marijuana into the state constitution.

The most likely path for legalization, though, remains the initiative Brown is helping to lead. Lawmakers, like Sen. Chris McDaniel, R-Ellisville, have generally punted on the topic when asked, saying they would respect the will of the voters.

Medical marijuana would not only bring health benefits to Mississippi, Brown told the Jackson Free Press, but economic benefits as well. He cited farmers across the state, and especially in the Delta, who have inquired about the possibilities the crop could bring.

Before he started working on the initiative in Mississippi, Brown, an Iraq War veteran, was part of Louisiana Veterans for Medical Cannabis. That group lobbied lawmakers in Louisiana last year so that veterans would have access to medical-marijuana treatment for ailments like post-traumatic stress disorder and chronic pain when the state's medical-marijuana law goes into effect.

Louisiana legalized medical marijuana in 2015, but nearly four years later, residents still do not have access to the medicine, thanks to bureaucratic holdups.

Brown said the leaders of the Mississippi initiative noted the hurdles other states faced in implementing medical marijuana and took steps to avoid similar pitfalls.

In Louisiana, Brown pointed out, the state only allowed licenses for two growing facilities. To complicate matters, medical-marijuana legalization is tied to the university system, the state's agriculture department and several other state agencies. When crafting the Mississippi initiative, backers decided to simplify things. Under this initiative, there will be no limit on the number of licenses issued, though there will be a high threshold for entry, and it will all be under the purview of the Mississippi Department of Health.

If the initiative were to become law, the Mississippi Department of Health would issue a medical-marijuana identification card. Even with that, though, patients under medical-marijuana treatment would still not be able to smoke it in a public place or operate a vehicle while under its influence.

In 2014, Harper sat in Mississippi Gov. Phil Bryant's lap as he signed Harper Grace's law, which was supposed to allow her and other children like her to obtain treatment with cannabis oil at the University of Mississippi Medical Center.  Because UMMC is federally funded, however, federal approval is required and has yet to be granted. Harper Grace's Law has not allowed for the treatment of even one child with cannabis oil in the four years since Bryant signed it.

The Medical Marijuana 2020 initiative would bypass the roadblocks that law ran into by allowing for the creation of medical-marijuana treatment centers all across the state—not just at one federally funded health center.

The day after Durval filed the initiative, Bryant condemned the effort in a Facebook post, despite being the governor who signed Harper Grace's bill into law.

"I will be voting 'no' if this makes it on the ballot," Bryant wrote. "With all the pharmaceutical advancements we have seen, it would seem strange to bring pot into the equation."

In an interview with the Jackson Free Press last year, Durval stressed that the bill is not about recreational use. She invoked the day her child sat in the governor's lap, her family full of hope that the law would make the treatment possible.

"All I'm asking is if it was anybody in his family—or in the family of anyone else who is against it—what would you do?" Durval said. "I understand why he is against it, and I don't fault him for that, but you can't fault me or any other family for trying to do everything they can for their child."

"If you were a helpless father or mother watching your child seize, and you knew there was something out there that could possibly better control those seizures, you would do it, too, and you can't lie and say you wouldn't," she said. "Try to look at it from our perspective and think about what we go through every day, fearful and full of the kind of anxiety that turns your world upside down. You're desperate as a mother and as a person to do everything you can."

A prior initiative in Mississippi failed in 2015 after supporters were unable to collect enough signatures to make the 2016 ballot. It, however, was light on regulations and sought to legalize not just medical marijuana, but recreational marijuana as well. It never garnered the level of support from physicians and public officials that this initiative has already.

The Millsaps/Chism poll interviewed 687 likely voters in Mississippi from Jan. 2-4 and has a margin of error of +/-3.74 percent. Fifty-nine percent of interviews were conducted by landline phone, and 41 percent by cell phone.