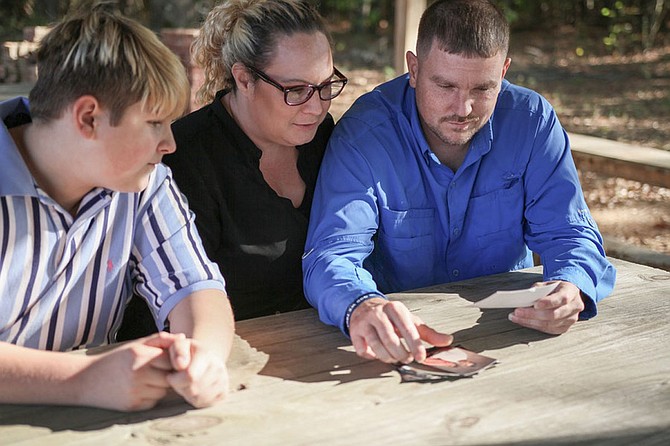 Dusty Houser (right) leafs through photographs of his father Paul Houser alongside his son Kyler and wife Ree. Paul Houser is serving a 60-year prison for a drug-related offense because of Mississippi’s habitual-offender laws. Photo courtesy FWD

Early one morning on May 5, 2006, Paul Allen Houser walked into a convenience store in Columbus, Miss., to purchase cold medicine, a copy of Tradewind magazine, lithium batteries and a 24-ounce bottle of Mountain Dew. Houser, then 43, had struggled with substance abuse for most of his adult life, after a work-related back injury at age 15 left him with a prescription-painkiller addiction. Houser was on his phone at the check-out counter when he noticed a police officer approaching the store. He rushed out after paying for his items and drove off in his truck.

Shortly afterward, the same officer, Wade Beard, stopped Houser and held the unarmed man at gunpoint while waiting for another officer, Scott Quinn, to arrive. The store clerk, Crystal  Strickland, had notified Beard of Houser's "nervous" demeanor and his purchase of the batteries and medicine, which contained pseudoephedrine—ingredients commonly used in the manufacture of methamphetamine.

Quinn arrested Houser for driving with a suspended license, while Beard and a police dog searched his vehicle. They later recovered the cold medicine and the batteries, which Houser testified he had purchased for his game camera, and which he had thrown out of his truck earlier because he was worried about his previous criminal history.

Police charged Houser with "possession of precursors" to create an illicit drug—meth. In Mississippi, being caught with ingredients for a drug can land a person in jail, regardless of whether the person has manufactured or possesses the drug at the time of arrest.

But it was Houser's prior drug-related felony convictions, including one related to the sale of less than 1 ounce of marijuana in 1983, that classified him as a "habitual offender" under Mississippi's criminal rules before the 2006 arrest.

After Houser's first trial ended in a mistrial, a judge sentenced him to 30 years in prison under Mississippi's  habitual-offender law. Because he was a repeat drug offender, the judge also applied the state's enhanced drug-sentencing law, dubbed the "doubler," because it doubles the length of second-time or subsequent drug convictions.

All in all, Houser was sentenced to 60 years in prison. Habitual sentencing also made him ineligible for parole or time reduction for good behavior or  participation in self-enrichment programs, like drug-abuse treatment.

By the time of his release, Houser will be 103 years old.

More than 900 Mississippians have prison terms that last 20 years or longer. Half will die in prison for being sentenced to life without parole or with an excessively long prison term that amounts to a "virtual life sentence," as in Houser's case.

Mississippi has two primary habitual sentencing laws. Mississippi Code Sec. 99-19-81 states that those with two prior felony convictions shall receive the maximum prison term for a current conviction. This means that a person with two prior drug-possession charges can end up with a 60-year prison sentence if arrested for possession or sale of drugs.

Mississippi Department of Corrections data from June 2019 show that the majority of the people serving virtual life habitual sentences—2,261—were sentenced under this law.

The other habitual law, Sec. 99-19-83, states that a judge can sentence a person to life without parole upon that person's third felony charge, if one of his or her two prior felony convictions constitutes a "violent" offense—even if the offense that he or she is being sentenced for is not violent. And while robbery, murder and rape are defined as violent offenses under Mississippi's code, so are unarmed home burglaries.

Furthermore, judges can exercise discretion in classifying a felony offense as a violent crime, if it is not included in the list of eligible offenses under Sec. 99-19-83, "if the facts show that the defendant used physical force, or made a credible attempt or threat of physical force against another person as part of the criminal act."

Under that law, as of June, 374 people are serving habitual life sentences.

In addition, a judge can double or triple the prison sentence for selling drugs within 1,500 feet of a school, park, church or movie theater. Similarly, the state's drug-enhancement sentencing law can double the length of a subsequent drug conviction, which is how Houser's 30-year-long-sentence increased to 60.

"[A]ny kind of meaningful steps forward in Mississippi is going to have to include some pretty robust sentencing reform. This is not asking Mississippi to be on the vanguard," FWD.us Senior Criminal Justice Reform Director Zoe Towns said in an interview last month.

The State of Mississippi needs to examine neighboring states' habitual laws and sentencing lengths for drug and property crimes and then reclassify offenses here, she said, adding, "Mississippi just needs to kind of catch up."

Paul Houser is white, but habitual laws disproportionately target black men, who account for 75% of those now incarcerated under habitual sentences despite making up 13% of Mississippi's total population, a November 2019 FWD.us report, "We All Pay: Mississippi's Harmful Habitual Laws," found.

MDOC data show the racial disparities in sentencing. In August 2018, 358 people were serving habitual life sentences; 74.6% were black and 27% were there on non-violent crimes.

Black people accounted for 77.5% of those serving habitual sentences for non-violent offenses. The bulk of those serving extreme sentences in Mississippi are behind bars for drug-related charges, including simple marijuana possession.

Mississippi's habitual laws criminalize people for relapsing, advocates say, without addressing the root cause of  addiction or improving public safety.

In 2019, the Mississippi Legislature passed a comprehensive criminal-justice reform bill, House Bill 1352, which included expansion of drug courts in the state. But Mississippi Code automatically excludes many who need treatment from accessing drug courts.

"You've got a drug addict who waits around for his neighbor to leave so he can go in and get some food because he is hungry. That's 'burglary,'" Mississippi state public defender Andre De Gruy explained, which counts as a violent offense even without a person there to harm. "[Burglary] is a crime of violence by definition, and ... you're excluded from drug court because of crimes of violence."

Paul Houser's son, Dusty, says his 12-year-old son is not allowed to hug his grandfather, who has been incarcerated since the child's birth.

"He's never seen him in the free world," Dusty Houser said in an  interview. "He's always seen my father behind bars. And that's really hard for me because my son and my dad are more alike than me and my dad."

Studies show that even short-term incarceration negatively affects families, but decades-long sentences are known to sever family bonds or prevent them from forming. Having an incarcerated family member has other long-lasting collateral consequences, including financial insecurity, homelessness, lower educational outcomes and increased likelihood of developing mental-health problems.

"When you have a family member (in) prison, there are no stress-free days," Patsy Houser, Paul's stepmom, wrote in a statement. "You constantly worry about them because you realize what harm can come to them at any time."

Housing the 78 people now serving life sentences has already cost state taxpayers more than $16 million, the FWD.us report said, and could cost an additional $52 million by the time their prison terms end. Taxpayers must shoulder additional costs of a growing elderly prison population serving habitual sentences.   Older people are more likely to receive extreme sentences, with people above age 40 accounting for almost 80% of those serving sentences of 20 years or longer, the report said. More than a quarter are 55 or older.

The family of Paul Houser in Caledonia, Miss. In 2007, a judge sentenced Houser to 60 years in prison under the state’s habitual offender law. He is not eligible for release until he is 103. Photo courtesy FWD

As of October, 1,091 people over age 60 were in MDOC custody. Only two were eligible for geriatric parole, because Mississippi law disqualifies people over 60 who are sentenced as habitual and violent offenders from early parole, despite research studies proving elderly people are less likely to commit crimes.

"There is no way for them to get out. So the problem is just going to  increase," De Gruy said.

On two occasions, jurors recognized Dusty Houser in public and expressed remorse to him for finding his father guilty. Had they known Paul Houser would draw such a long sentence, they would "have never in their life considered him guilty, never," Dusty said.

De Gruy agrees that most residents don't understand how sentencing works in the state. "We've had situations where jurors had no idea that it was going to be such a severe punishment," he said.

De Gruy disagrees with judicial latitude in defining crimes of violence. "In our opinion, that's something that should be found by a jury, not by a judge. That may go up in review in federal court at some point in the future," he added, pointing to a 2019 case,  Bowman v. Mississippi, and the 2016 case Fogleman v. Mississippi.

He warned against sentencing guidelines, which he called "very-well intentioned efforts that have never really worked well." He cited a recent National Association of Criminal Defense Lawyers report on their impact and efficacy.

"The guidelines didn't end any unjust sentencing, they just institutionalized it," De Gruy said. "... They basically worked as unvalidated risk assessments. And they ended up with the same people getting these extreme sentences because of who set up the guidelines."

Prosecutors and judges also prefer discretion, he said, because sentencing data can be used politically against  judges and prosecutors, who hold elected positions and do not want constituents to deem them too soft or harsh.

Reducing maximum sentencing, reclassifying crimes (including what constitutes a violent crime), and ending life without parole for non-violent crimes would dramatically improve sentencing disparities in Mississippi, De Gruy believes. Systemic changes to the state's underfunded and inadequately overseen public-defender system could help, too.

So far, popular opinion seems to side with reform. Ninety-two percent of American voters believe people should be eligible for "time off their prison sentence for maintaining good behavior and participating in rehabilitation programs," and 89% support supervised probation and "parole and post-release supervision."

Another 77% believe judges should apply "prison terms less than the maximum sentence," and more than half believe convictions from 10 years ago or longer should not affect sentencing.

"There's no way to grasp it ... the belief that (your loved one) is going to die in prison," Dusty Houser said.

CORRECTION: An earlier caption identified the second photograph as being of Paul Houser and his family during visitation. The photograph is of the Houser family in Caledonia. Also, the story identified Patsy Houser as Paul Houser's wife. She is his stepmom. We apologize for the errors.