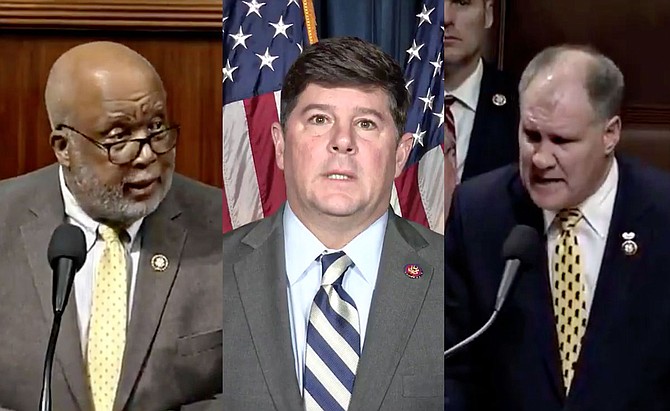 President Donald Trump's "overt gangsterism" made his impeachment necessary, Mississippi Democrat Jacqueline Amos said in a statement the day after only one member of Mississippi's delegation in the U.S. House of Representatives voted to approve articles of impeachment.

"On behalf of the county Democratic executive committees of our state, I salute the honorable leadership of Speaker Nancy Pelosi in her solemn constitutional duty in leading the U.S. House of Representatives through the presidential impeachment process," wrote Amos, the chairwoman of the Mississippi Association of Democratic Chairpersons. "We stand in solidarity with Congressman Bennie Thompson behind his affirmative votes on both articles."

The Republican U.S. House members in Mississippi's congressional delegation were "willing to turn a blind eye to constitutional violations by the president," Thompson, the state's lone Democrat in Congress, charged as the chamber debated the articles of impeachment on the House floor Wednesday.

Hours later, nearly all Democrats and one independent voted to impeach Trump on charges of abuse of power and obstruction of justice related to his attempts to pressure Ukraine's president into launching a sham investigation into potential 2020 rival Joe Biden. The House passed both impeachment articles with votes to spare.

"As a nation, we have no other alternative. We must protect our Constitution in the United States of America," said Thompson, who represents Mississippi's 2nd congressional district, which includes Jackson and most of the Delta region.

The Mississippi Republican Party's official Twitter account, @MSGOP, criticized Thompson on Wednesday, accusing him of "vot(ing) against his district's interests and for his power and clout."

"My district interests are not in line with the GOP," responded Thompson, whose district voted for Hillary Clinton over Donald Trump in 2016 in a 64-percent to 35-percent vote.

Republican members of the House, including all three from Mississippi, stood in lockstep with Trump, though, with not a single member of the party voting to impeach him on either article.

"Today is a sad day for our nation," said Republican Rep. Steven Palazzo, who represents Mississippi's coastal 4th congressional district. "House Democrats will force a vote on the weakest articles of impeachment this legislative body has ever seen in an attempt to overturn the fair and lawful election of Donald Trump. ... No facts have been presented to substantiate a single allegation made by the liberal majority."

The "fairness" of the 2016 election remains in doubt among many, thanks to Russia's systemic attacks on that election and the Trump campaign's documented attempts at coordinating with the Kremlin. But more than a dozen impeachment witnesses provided thousands of documents and more than 100 hours of under-oath testimony in the investigation over Trump's actions in Ukraine.

'Take Off the Partisan Blinders'

After the House voted to impeach, U.S. Sen. Cindy Hyde-Smith, who bragged about voting with Trump "100% of the time" and rode around with a giant selfie of her and the president on the side of her 2018 campaign bus, said in a press release that she had not "heard or read anything regarding the charges against the president the raise to the level of impeachable offenses" and that she is "confident the president will be treated more fairly in the Senate."

That was a more measured comment than her recent promise to "stand up" for Trump in the Senate trial, where she will serve as a juror, and help ensure a quick acquittal. She will have to swear an oath to "do impartial justice according to the Constitution and laws" before the trial begins.

On Wednesday night, her likely 2020 Democratic opponent, Mike Espy, sent out a press statement criticizing her.

"This is a serious matter for our nation and should not become subject to fits of hyper-partisanship," Espy said. "Cindy Hyde-Smith recently said that when impeachment reaches the Senate, the process 'will come to a swift end,' and '(she) will stand up for our president.' Her statement makes it clear that she is fully prepared to violate the oath to uphold impartial justice. It is time for all senators, regardless of party, to uphold their oath."

"My question to Sen. Hyde-Smith is: how can you take the juror oath in one breath and violate it in the next? Take off the partisan blinders, senators, and do your duty as an impartial juror. Do not stand in the way of witnesses being called and evidence being heard."

Mississippi's other U.S. senator, Roger Wicker, released a video on his social-media channels in response to the impeachment vote.

"The founders of our nation gave Congress the power to impeach so that the executive branch could be held accountable. They intended it to be used only in extreme cases with clear evidence and overwhelming bipartisan approval," said Wicker.

Wicker was a U.S. House member in 1998 when he voted for articles of impeachment against President Bill Clinton for lying under oath about having an affair with White House intern Monica Lewinksy.

"The rule of law means that the commander-in-chief of our armed forces could not be held to a lower standard than his subordinates," Wicker said on the U.S. House floor in 1998. "The rule of law is more important than the tenure of office of any official."

In her statement Thursday, Amos issued a plea to Wicker and Hyde-Smith.

"We are gravely troubled by the overt gangsterism of the current occupant of the White House. We implore Sen. Wicker and Sen Hyde-Smith to put partisanship aside and consider their paramount constitutional duty to the nation as this matter comes before the Senate," Amos said.

Amos vowed that her organization will "continue to organize Democrats and other patriots in every precinct in Mississippi in preparation for the federal general election on November 3, 2020, when we shall cast our votes in record numbers to evict gangsterism from the White House and retire its Mississippi sycophants from the U.S. Senate and the U.S. House."

On Wednesday evening, Mississippi Gov. Phil Bryant, a friend of the president, compared his impeachment to Pearl Harbor. "This is a day that will be remembered in infamy," Bryant tweeted, attaching a meme quoting misquoting Isoroku Yamamoto, whose character in the 1970 film "Tora! Tora! Tora!" said: "I fear all we have done is to awaken a sleeping giant and fill him with terrible resolve."

Rep. Michael Guest, a former prosecutor who represents Mississippi's third congressional district, claimed on the House floor that the articles of impeachment do not "meet the standards set forth by our founding fathers" and "lack historical precedent."

But articles alleging obstruction of justice and abuse of power were brought against both President Richard Nixon and President Bill Clinton during the impeachment proceedings against them.

Last week, more than 1,500 historians signed a letter calling for Trump's impeachment, writing that "if President Trump's misconduct does not rise to the level of impeachment, then virtually nothing does."

"President Trump's lawless obstruction of the House of Representatives, which is rightly seeking documents and witness testimony in pursuit of its constitutionally mandated oversight role, has demonstrated brazen contempt for representative government. So have his attempts to justify that obstruction on the grounds that the executive enjoys absolute immunity, a fictitious doctrine that, if tolerated, would turn the president into an elected monarch above the law," reads the letter, which three University of Mississippian historians signed.

The two articles of impeachment passed on Tuesday with nearly every Democratic member supporting both, no Republicans and one independent—Rep. Justin Amash of Michigan, who left the Republican Party earlier this after coming out in support of impeachment upon reading the Mueller Report's descriptions of separate allegations against the president.

During Nixon's Watergate impeachment, though, some Southern Democrats, also known as Dixiecrats, stood by the Republican president, including Rep. Sonny Montgomery, who sought to defeat attempts at impeaching him.

"I am ready to roll up my sleeves and work with those of the House Judiciary Committee of a like mind in asking our colleagues from all sections of the nation to vote against articles of impeachment," The Clarion-Ledger reported Montgomery telling the House on July 31, 1974, claiming he was one of the first Democrats to back the Republican president.

"Alleged misconduct is indeed a serious matter, but equally serious is the damage we do to our nation and the office of the president. ... When this matter reaches the House floor, I hope we will not lose sight of what is best for the American people and the nation itself," Montgomery said, making arguments similar to those many House Republicans made Wednesday when they claimed that Trump's impeachment would damage the presidency.

Southern Dixiecrats often felt a kinship with Nixon, who won partly by dog whistling racist sentiments to suburban white voters who had fled southern cities in favor of white suburbs after public-school integration.

Just days after Montgomery's defense of Nixon, though, on Aug. 5, the White House released under court order tapes of phone calls that implicated Nixon in the Watergate burglary and its subsequent coverup.

Then, on Aug. 8, 1974, Nixon wrote a historic letter that achieved Montgomery's goal of stopping impeachment: "I hereby resign the Office of President of the United States."

On the evening of last night's impeachment vote, though, Trump showed no sign that he expects to go down like Nixon. At a rally in Michigan last night, he laughingly mocked former Michigan U.S. Rep. John Dingell and Dingell's wife who now holds his seat, Rep. Debbie Dingell. Maybe John Dingell is not "looking down on" Debbie Dingell, Trump said after she voted for his impeachment; "Maybe he's looking up" at her from hell.

"Mr. President, let's set politics aside. My husband earned all his accolades after a lifetime of service," wrote the widow, whose husband served in World War II. "I'm preparing for the first holiday season without the man I love. You brought me down in a way you can never imagine and your hurtful words just made my healing much harder."

Amash, the ex-Republican independent who voted for impeachment, responded to Dingell's tweet. "Debbie, we are here for you. So many people loved and respected John. Praying for you and your family," Amash wrote.

Today, Christianity Today, a preeminent evangelical magazine founded by Billy Graham, released an editorial calling for Trump to be removed from office.

"To use an old cliche, it's time to call a spade a spade, to say that no matter how many hands we win in this political poker game, we are playing with a stacked deck of gross immorality and ethical incompetence," the editorial stated. "And just when we think it's time to push all our chips to the center of the table, that's when the whole game will come crashing down. It will crash down on the reputation of evangelical religion and on the world's understanding of the gospel. And it will come crashing down on a nation of men and women whose welfare is also our concern."