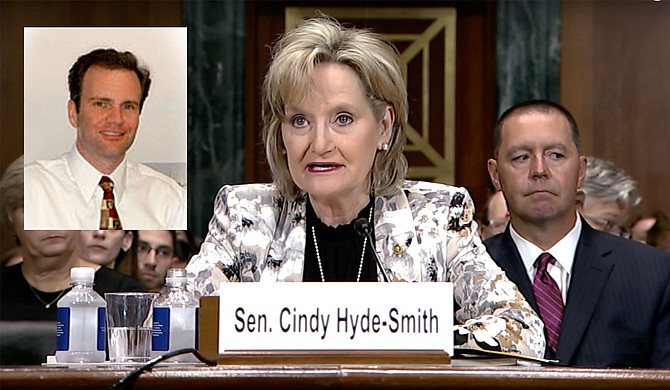 An embattled Mississippi judge's nomination to the 5th U.S. Circuit Court of Appeals in New Orleans faces opposition from civil rights groups that claim he has a poor record on issues involving race and sexual assault—and from conservatives who claim he is not conservative enough.

In an October letter, The Leadership Conference on Civil and Human Rights President Vanita Gupta wrote to senators, sharing concerns that Ozerden "has a track record of reflexively dismissing the claims of discrimination victims without letting them have their day in court."

In July hearings, Republican lawmakers questioned his credentials on "religious liberty," pointing to his 2012 dismissal of a lawsuit against the Affordable Care Act's contraceptive mandate. Trump nominated Ozerden in June at the urging of White House Chief of Staff Mick Mulvaney and against the advice of the White House Counsel's Office, Politico reported in October. Mulvaney is a personal friend of Ozerden.

In one case, an Alabama worker named Mekeva Tennort alleged that her employer, Rite Way Service, Inc., fired her after she complained that a male supervisor was sexually harassing a female coworker. She claimed the supervisor said the woman was wearing tight pants and added, "I'm a man, I'm gonna look." Tennort also described an incident where the man allegedly "pretended to strike the female coworker's behind and exclaimed, 'ooh wee.'"

"Judge Ozerden concluded that Ms. Tennort could not have reasonably believed that the male supervisor's conduct violated the law, and he granted summary judgment to defendant Rite Way," Gupta wrote.

The 5th Circuit reversed that decision, ruling that Tennort was entitled to have a jury hear her case. Rite Way ultimately settled the case in 2017.

Gupta also described a 2011 case in which, Larry Rudolph, an African American plaintiff and welder, alleged he had suffered through a racially hostile working environment at Ingalls Shipbuilding, claiming he "was exposed to racial epithets, graffiti" and "saw hangman's nooses on three separate occasions and heard white supervisors and coworkers use the N-word." He claimed an employee once placed signs under a twin water fountain, with one listing the names of white employees and the other labeled as "Others."

Rudolph also alleged he heard a supervisor tell a black colleague who was sharing concerns about his treatment that "if I take a rope and put it around your neck, you would complain about that."

Ozerden dismissed that case, though, writing that "simple teasing, offhand comments, and isolated incidents, unless extremely serious, will not amount to discriminatory charges that can survive summary judgment" and "even assuming all of these incidents occurred within the relevant time period, the Court cannot say that there existed a regular pattern of frequent verbal ridicule or insults directed towards Rudolph."

Gupta also pointed to Ozerden's ties to former U.S. Sen. Trent Lott, R-Miss., whom he fundraised for in the past. The letter notes Lott's infamous 2002 remarks, when he said he was "proud" that Mississippi voted for segregationist Sen. Strom Thurmond in 1948 and that "if the rest of the country had followed our lead, we wouldn't have had all these problems over all these years, either."

"Yet in 2006, just a few years later, Mr. Ozerden served as a fundraiser for Sen. Lott in his re-election campaign, which indicates he either agreed with Sen. Lott's remark or wasn't bothered by it," Gupta wrote. "Either alternative is disconcerting."

Gupta suggested Ozerden, who once served on the board of the Harrison County Republican Club and fundraised for multiple GOP candidates, would be too partisan. Some of those ties may even be unethical, Gupta claimed.

"Ozerden was raising money for Sen. Lott at the time that Sen. Lott recommended him for a judgeship in 2006, suggestive of an unseemly quid pro quo," Gupta wrote.

President George W. Bush nominated Ozerden, a fundraiser for Lott's 2006 re-election campaign, in September 2006—at Lott's recommendation and at a time when Lott was the Republican Senate Majority Whip.

"I attended campaign function and assisted with fundraising" for Lott, Ozerden wrote in a Senate questionnaire earlier this year.

Ozerden also indicated that he assisted with fundraising for former Republican Mississippi Gov. Haley Barbour when he was a candidate in 2003, and for current-Mississippi Mississippi Lt. Gov. Tate Reeves that year, who was then a candidate for Mississippi State Treasurer. Reeves won the race for governor in November and will assume his new office in January.

In October, the right-wing Washington Free Beacon reported that Ozerden's ex-wife, Denise Dunaway Ozerden, claimed in a deposition 10 years ago that the nominee once pressured her to donate $1,000 to Lott. Federal Election Commission records show Dunaway has only ever made one political donation: $1,000 in May 2007 to Lott's PAC, the New Republican Majority Fund, just a month after the Senate confirmed Ozerden to the federal court.

In the sworn testimony, the Free Beacon reports, Dunaway Ozerden said her husband "wasn't supposed to give out any contributions and, yet, he did. Of course, he made me write out the check."

The Free Beacon reported that Ozerden did not respond to a request for comment for that story, but sent a letter to the outlet telling them they should "destroy" the document because it is supposed to be sealed in divorce proceedings.

Republicans on the Senate committee, though, have offered a strikingly different set of concerns.

In July, U.S. Sen. Ted Cruz, R-Texas, told the nominee that his refusal to hear the case against the Affordable Care Act's contraceptive mandate "greatly" concerned him. Ozerden, though, said he was bound by precedent at the time and did not have jurisdiction to hear the case. He pointed to 22 other federal judges who had made a similar decision.

"The notion that I am hostile to religious liberty is simply not accurate," Ozerden told the Senate panel at the time, saying his "hands were tied" by "binding 5th Circuit precedent."

"I followed the law I had to follow," he said.

The 5th U.S. Circuit Court of Appeals hears cases originating in Alabama, Mississippi and Louisiana. The seat has remained empty throughout Trump's presidency.

If Cruz and another Republican, Sen. Josh Hawley, R-Mo., continue to object to Ozerden, he will need support from Democrats to have enough votes to advance out of committee. None have yet signaled support, though.

The July nomination drew early praise from Mississippi's U.S. senators, Republicans Cindy Hyde-Smith and Roger Wicker, who both pointed to Ozerden's military service in the U.S. Navy and his qualifications after serving for 12 years on the federal bench, where he mostly heard cases in Gulfport, Miss. Wicker pointed to the fact that Ozerden, who was born in Hattiesburg, Miss., is the "son of an immigrant" from Turkey.

"Judge Ozerden has impeccable credentials, and it is clear he is very well qualified—by ability, education, and experience—to serve as an appellate judge," Hyde-Smith said in a July press release. "Judge Ozerden is a man who is admired by all who come to know him and is a widely respected person of great integrity. ... I am proud of the recommendation Sen. Wicker, the late Sen. (Thad) Cochran, and President Trump have made to the Senate, and I urge the Judiciary Committee to approve this nomination."

Among the current crop of Republicans, though, a judge's qualifications seem less important than their commitment to right-wing rulings beneficial to Republicans and GOP causes. Even as a vote on Ozerden's nomination has repeatedly stalled, Senate Republicans pushed through multiple judges that the American Bar Association deemed unqualified.

That includes 37-year-old Justin Walker to the Western District of Kentucky, who the ABA found did "not presently have the requisite trial or litigation experience or its equivalent" because he did not have any "significant experience" hearing cases at trial.

On a 50-41 party line vote, Republicans approved Walker's nomination to the Western District of Kentucky in October. Democratic Senate Majority Leader Chuck Schumer suggested "the only reason Mr. Walker has been nominated is his membership in the Federalist Society and his far-right wing views on health care, civil rights, and executive power."

Ozerden joined the Federalist Society earlier this year. For decades, the organization has amassed power in Washington, D.C., and its support is now almost a prerequisite to win over conservative support. It was instrumental in supporting and pushing through U.S. Supreme Court Justice Brett Kavanaugh's nomination last year, spending millions to support him even as he faced sexual assault allegations from multiple women, including Christine Blasey Ford.

Gupta's letter cites the Federalist Society membership as a strike against him, though.

Chip Pickering, a former Mississippi congressman, is one of the state's most prominent Federalist Society members. In Ozerden's Senate questionnaire, he said that Pickering's 2005 re-election was one of the GOP campaigns he aided in fundraising efforts.

In her letter, Gupta offered another concern about Ozerden: His appointment would further solidify the lack of diversity on the 5th U.S. Circuit Court of Appeals.

"The Fifth Circuit is the most racially diverse of all the circuits: two of its three states—Mississippi and Louisiana—have the largest percentage of African Americans in the country, 38 percent and 32 percent, respectively. The third state, Texas, is a majority-minority state and has the second largest percentage of Hispanics in the country (40 percent). Yet the judges serving on the Fifth Circuit are racially monolithic: none are Hispanic and only two are African-American. If Judge Ozerden were confirmed to the Fifth Circuit, 14 of its 17 active judges would be white and 13 of the 17 would be male," Gupta wrote.

Trump presently has 55 federal court nominees awaiting confirmation. Just 11 are women, one is Latino, and none are African American.

"Our nation's great diversity should be reflected in its government institutions, especially the federal judiciary, which serves as the ultimate guardian of our rights and liberties. At a time when the legal profession has more women and attorneys of color than ever before, President Trump's record on judicial diversity is truly appalling," Gupta wrote.

CORRECTION: An earlier version of this story said Trump has appointed 55 federal judges during his tenure. That is incorrect; he has appointed and the Senate has confirmed 165 judges since he took office in January 2017. He currently has 55 nominees awaiting Senate confirmation.