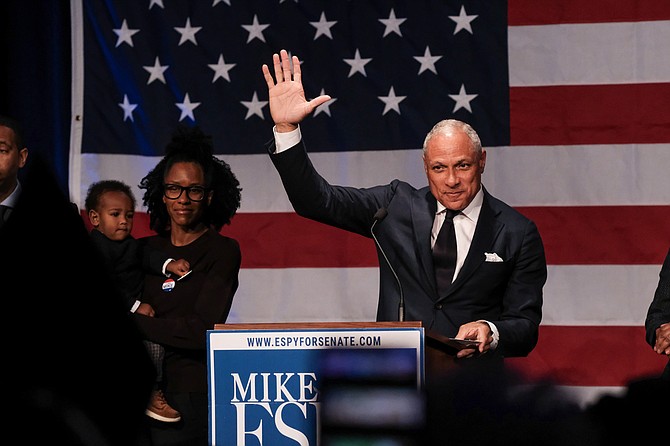 Former U.S. Secretary of Agriculture Mike Espy called for gun-law reforms in an email to supporters of his 2018 campaign on Monday. Photo by Ashton Pittman

The Democrat who lost to U.S. Sen. Cindy Hyde-Smith in Mississippi's 2018 U.S. Senate special election, Mike Espy, broke his post-campaign silence to call for action on gun reform and against "violent white nationalism" in an email to supporters on Monday.

"I know you haven't heard from me in a while, but this was just too important. Our country is hurting after two heartbreaking mass shootings in the span of 24 hours this weekend in El Paso, Texas, and Dayton, Ohio. And both of these tragedies came just a week after a mass shooting at the Gilroy Garlic Festival in California," Espy, the former U.S. secretary of agriculture, wrote.

The death toll for those three shootings stands at 34 but could rise further.

On Monday, employees returned to work at a Walmart in Southaven, Miss., where a disgruntled employee shot multiple people, killing two, on July 30.

"As a lifelong gun owner, even I believe in common sense gun reform. In the past two decades, things have drastically changed as gun safety measures like the ban on assault weapons were rolled back, and mass shootings have become the norm," Espy wrote. "My own thoughts on gun reform have evolved, because the fact of the matter is that with hundreds of mass shootings now taking place every year in schools, places of worship, and other community spaces across our country, we can't afford to continue doing nothing."

The National Rifle Association endorsed Espy's opponent in last year's U.S. Senate race, Republican Hyde-Smith, who opposes gun-law reforms. Espy has not announced plans to run against her when she is on the ballot again in 2020, but he did file for a potential rematch just days after the 2018 special election.

Lawmakers, Espy wrote, should expand background checks and limit "access to dangerous assault weapons and high-capacity magazines" like those shooters used over the last week in multiple shootings.

"It's beyond time those in power get their heads out of the sand and do something about this epidemic besides thoughts and prayers, especially when we're simultaneously witnessing the rise of violent, white nationalism, evident in multiple mass shootings, online forums, and even hate speech emanating from the highest office in the land," Espy wrote.

Espy was referring to the fact that the El Paso shooter, in an online post explaining his plans, echoed President Donald Trump's rhetoric about an "invasion" of immigrants from south of the U.S.-Mexico border. His shooting targeted Hispanic residents in an El Paso Walmart, killing at least 22.

Mike Espy spoke to the Jackson Free Press about both his history and his approach to his 2018 campaign.

Last August, Espy showed the Jackson Free Press an award he received from the NRA when he was a congressman in 1988 and explained his evolving views on guns in an interview.

"From '71 to '75, I was a member of the NRA because I was using their rifle range (as a student at Howard University in Washington, D.C.). When I ran for Congress, there was an opportunity to get their endorsement," he said.

"I looked at their code and what they believed in and what I believed in, and I decided to renew my membership in 1986. That's because I believe in the Second Amendment—I did then, and I do now. I'm not running away from that, but things have changed. You know how Republicans who were Democrats say, 'I didn't leave the party; the party left me'? I can just say, 'I didn't leave the NRA; the NRA left me.' Because now they're really right wing."

"I got the Silver Rifle (NRA award) in 1988 because my voting record was almost 100 percent," Espy added.

The number of school shootings "sobered" him, Espy said.

Last year, Espy earned 46% of the vote. It was the closest any Democratic candidate in Mississippi has come to winning a U.S. Senate seat than in any election since 1986. The last Democrat from Mississippi to win an election for U.S. Senate was longtime Sen. John C. Stennis, who won his last race in 1982.