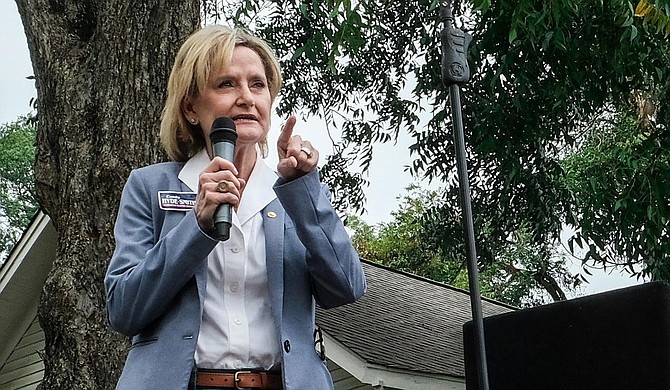 U.S. Sen. Cindy Hyde-Smith, an NRA-endorsed Republican, blocked a universal background-checks bill this morning around the same time a teenage gunman in Santa Clarita, Calif., carried out a mass shooting at his high school.

U.S. Sen. Chris Murphy, D-Conn., brought the bill up. He represents constituents whose children died in Newtown, Conn., when a 2012 gun massacre at Sandy Hook Elementary left 20 young children and six staff members dead. Since then, he has tried unsuccessfully to change the nation's permissive gun laws. As news of the Santa Clarita shooting rolled in this morning, he pushed for his colleagues to take up background-check legislation the U.S. House passed in February.

"We can't go 24 hours without news of another mass shooting somewhere in America," he said on the Senate floor. "My kids and millions' others hide in corners of their classroom or in their bathrooms preparing for a mass shooting at their school, and this body does nothing about it."

Then, Hyde-Smith, with the backing of her party, blocked the bill from even going to the Senate floor for a vote.

"Legislation that would affect the rights of American citizens under the Second Amendment should not be fast tracked by the Senate," Hyde-Smith said on the Senate floor in Washington, D.C., this morning, referring to legislation that has been languishing for more than nine months.

Hyde-Smith said she feared that passing a bill requiring background checks for all gun purchases would make it difficult for her to gift weapons to children in her family.

"If I wanted to give my best friend's son or grandson my hunting rifle, would we first have to appear before a licensed gun dealer and go through a lengthy and potentially expensive background check?" she said.

The legislation Hyde-Smith blocked would require checks on all gun sales in the U.S.; currently, only licensed gun retailers have to run background checks, but not individual gun sellers or people who sell guns at gun shows.

Like hundreds of other House-passed bills, the background checks bill will likely die in the GOP-led Senate. On Wednesday evening, though, Hyde-Smith suggested in a tweet that the reason House Democrats can't "get things done" is because they are too focused on impeaching President Donald Trump.

Former U.S. Agriculture Secretary Mike Espy, who ran for Hyde-Smith's seat in 2018 and is running to challenge her for a rematch again in 2020, criticized the senator for blocking the bill in several tweets on Thursday afternoon, saying hers is "not the leadership our children deserve."

"Let's connect," he wrote. "Would love to campaign with you to remove Cindy Hyde Smith."

"My team will reach out to you ASAP," Espy replied. "Progress for our children can't wait."

"Let me be clear: anyone without the courage to protect our children with common sense gun reforms does not deserve the honor of serving in Congress," Espy tweeted later.

During last year's campaign, Espy spoke with the Jackson Free Press about his views on guns, saying he was "sobered about the number of school shootings." He showed the Jackson Free Press the "Silver Rifle" award that the National Rifle Association gave him in 1988, when he was a congressman with a nearly 100% voting record with the organization.

He believes in the Second Amendment, he said, but the NRA has gone too far with its modern rejection of everything from assault weapons limits to universal background checks.

After Hyde-Smith's action, Murphy lamented the fact that the bill probably would not get a vote.

"The American public are not going to accept silence from this body week after week, month after month, in the face of this epidemic carnage that is happening across this country," he said on the Senate floor.

In a press statement later, he said Republicans could not use impeachment as an excuse to refuse to take up a gun bill the House already passed. Impeachment hearings are currently taking place only in the lower house of Congress—not in the Senate.