EDITOR'S NOTE: Set an Example for the Next Generation 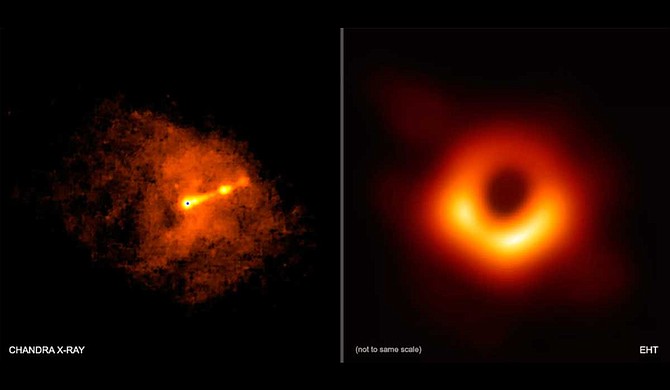 As women, we have to go through things such as our work being devalued after we play a major role in a scientific discovery or research project. A recent occurrence that comes to mind is the backlash Event Horizon Telescope project researcher Katie Bouman experienced after the project released the first images of a black hole on April 10. Photo courtesy NASA/CXC/Villanova University/J. Neilsen

There was absolute chaos in the gym. Junior and high-school students were running around the room, some doing a three-legged race, some whacking a pinata and some removing tissues from boxes. It was my church youth pastors' last hurrah before they left to take new jobs at a church in Baton Rouge, and they wanted to go out with a bang, so of course they orchestrated a whole event that took more time to explain than to actually do it.

I was standing off to the side watching when one of the other youth leaders motioned for me to come to the group huddle. As it had happened numerous times before, I suddenly found myself among the leaders, getting ready to volunteer to distribute tape for "Pin the Eye on the Emoji."

It was one moment in a whole series of moments where I found myself time and time again helping lead the youth group, even though I had originally started going to youth night on Wednesdays just to help them with smaller production things. As the night pressed on, I once again remarked at how some of the girls in the group look up to me.

What you observe in people as a child often becomes a part of your psyche as you get older. There's something in psychology called schema. Dictionary.com defines it as "an underlying organizational pattern or structure; conceptual framework." The concept helps us organize and categorize the world around us, and confirm our preconceived beliefs and ideas, especially about ourselves and other people. As my therapist explained it, schemas are basically things we learned in childhood that help us understand the world around us and  our place in it.

Schemas are helpful when information is coming at you from all directions, but they can be not-so-helpful because a lot of times the schemas color the world in way we shouldn't see it. For example, since childhood, I've held unrelenting standards toward myself. This isn't a bad thing until my standards are so high that I can't possibly meet them, and when I don't measure up, I'm left hating myself and edging into an episode of major depression.

As humans, we're going to develop those beliefs about the world around us. It's inevitable. We learn how to move through the world by watching others, and guess what? People are incredibly imperfect. We screw up. We let each other down. Sometimes we don't show as much consideration for others as we should. I've had plenty of those moments. Those beliefs are just a part of life, but some of them shouldn't carry so much weight. We shouldn't have to spend years fighting with body image or self-worth. We shouldn't have to believe that we'll be accepted only if we think or act or look one way.

I've spent years searching for my place in the world. I tried to fit in when I was younger, but the mold was too small for me. I'm too big and bold and loud and full of ideas. But because I couldn't fit that mold, I struggled for years with self-worth and self-confidence. I still do sometimes. And I know I'm not alone.

During the few months I spent on the youth group's leadership team, I often got to sit in on the group discussions, and a lot of what the girls talked about reminded me of what I went through, and sometimes still go through, as a woman. They remind me of how unsure of myself I've been throughout my life, how much I beat myself up sometimes for situations in life that I can't fix.

All humans deal with that, but girls and women especially have to put up with unrelenting and unfair standards. Society tells us that we have to look or act or dress a certain way. We can't wear what we want because men might take it the wrong way. We can't do things like play a major role in creating the first image of a black hole without the Internet devaluing our work. If we're women who see more fulfillment in a career than starting a family, people tell us we need to get our priorities straight. Hell, people say that if we don't shave our legs, we're not going to attract a man. (By the way, if you're getting that close to the hair on a woman's legs, you probably need express permission anyway.)

As women, we have an uphill battle to fight. All of us do. The girls who are in middle and high school now are facing some of those battles, and they'll just get harder and harder as we get older. As women, we need to band together to make sure we set good examples for the younger generation. We need to show them that it's OK to be whatever kind of woman they want to be, that they don't have to fit that mold. Maybe if we set a better example than we have in the past, the world will be a better place.

And maybe if we remember that younger people are watching us, we will set that better example.