Baria Donations Top All Dem Nominees in Mississippi Since 2008 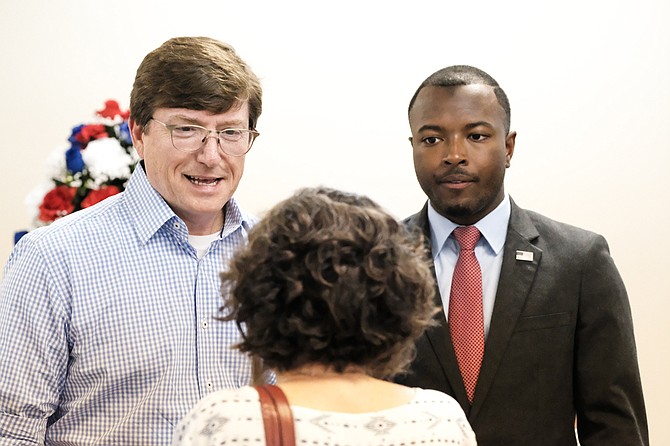 "David's numbers reflect the excitement we have seen around this race," Baria campaign manager Alyssa Miller said in a press release. "For too long, Democrats in Mississippi have watched their candidates turn themselves into a 'Republican-lite' version of themselves, by refusing to run an authentic campaign."

Baria, who serves as the house minority leader in the Mississippi House of Representatives, is challenging incumbent Republican U.S. Senator Roger Wicker. Wicker, who is known as a robust fundraiser, netted nearly $434,000 in the third quarter, bringing his total for the cycle to just under $5.8 million.

Mississippians first elected Wicker to the U.S. Senate in 2008, when he beat former governor Ronnie Musgrove, the state's last Democrat in that job to date. Musgrove brought in nearly $2.7 million that year—more than triple Baria's 2018 haul so far.

"Some politicians (cough Roger Wicker cough) walk into a room full of corporate donors and walk out with millions of dollars," Baria, who says he will work to end the influence of corporate money in politics if elected, wrote in a September fundraising email to supporters. "That's not how we do things here."

"I'm proud to be endorsed by End Citizens United and to run a grassroots-powered campaign because I've had it with billionaires like the Koch Brothers and their outsized influence on our democracy," he wrote.

The Koch Brothers, who own Koch Industries, are known for contributing billions to Republican candidates across the country using "Super PACs" that can raise unlimited funds, thanks to a 2010 Supreme Court ruling in Citizens United v. Federal Election Commission that struck down limits on corporate PAC donations. In a 5-4 ruling, the Court ruled that corporations, unions, nonprofits and other associations have free speech rights just like individuals. The government, therefore cannot restrict their PAC expenditures, the court found.

Still, Baria accepted $10,000 from PACs in the third quarter. That isn't a contradiction, Miller told the Jackson Free Press.

"David has rejected corporate PAC money," she said. "The (PAC) money he has received is from Senate leadership PACs—folks who will be his colleagues in January."

Wicker netted three individual donations of $5,000—the maximum individuals can give. One of those came from lobbyist Stephen C. Peranich, who works for business lobbying firm Blank Rome LLC. Peranich worked for former Democratic Mississippi Congressman Gene Taylor when he was still in office.

Wicker and Baria both received help from longtime party stalwarts. Republican strategist Karl Rove, who served as senior adviser and deputy chief of staff in the George W. Bush White House, held a $5,000 a couple dinner fundraiser for Wicker in August. James Carville, the Bill Clinton-era Democratic strategist who made "It's the economy, stupid" a permanent fixture of political punditry, held a fundraiser for Baria in his New Orleans home in the summer.

The Baria campaign did not provide details of the Carville fundraiser to the Jackson Free Press. Carville owns a second home in Baria's hometown, Bay St. Louis.

While Baria has raised more than any Democratic nominee in the state in 10 years, there is one Mississippi Democrat running for U.S. Senate whose haul nearly quadruples his.

Espy is not a Democratic nominee, however. As part of the nature of the special election, all candidates compete head-to-head with no party IDs by their names on the ballot. Mississippi state Sen. Chris McDaniel, R-Ellisville, is also challenging Hyde-Smith.

The bulk of Espy's funds—67 percent—come from large individual contributions, but he has accepted $184,522 in PAC money. In comparison, just under 3 percent of McDaniel's funds come from PACs, while 33 percent of Hyde-Smith's do.

Donations of less than$200 make up about 15 percent of Espy's funds, 35 percent of McDaniel's and just under 3 percent of Hyde-Smith's.

McDaniel raised a little more than $200,000 during the third quarter.

Anderson, a state legislator from Moss Point, is far behind his opponent, incumbent Republican Rep. Steven Palazzo, however; since the start of the cycle, Palazzo has raised nearly $700,000.

First District Democratic House candidate Randy Wadkins raised a little more than $26,000 in the quarter, bringing his total for the cycle to just shy of $150,000. Incumbent Republican Rep. Trent Kelly, meanwhile, brought in more than $194,000.

Democrat Michael Ted Evans, who is running for the second congressional district house seat, raised a mere $6,880 in the same period.

Mississippi's only currently serving Democratic congressman, Rep. Bennie Thompson in the second congressional district, does not have a Republican challenger in this year's race.

Already, the 2018 midterm elections are the most expensive in U.S. history. OpenSecrets.org reports that, even without all third-quarter totals in, candidates have already raised a record-breaking $3.96 billion combined.

OpenSecrets.org also reports that Democrats raised a record $876 million this cycle. The previous highest total fundraising for a party by this point was $458 million for Democrats in 2008. Between both parties, House candidates have raised a record $1.5 billion combined.

On Nov. 6, the same day as the national midterms, voters choose between Wicker and Baria. In the special election, Espy, Hyde-Smith and McDaniel clash in a jungle primary-style election on the same day. Allfour House races are also Nov. 6. Polls in the state are open from 7 a.m. to 7 p.m.