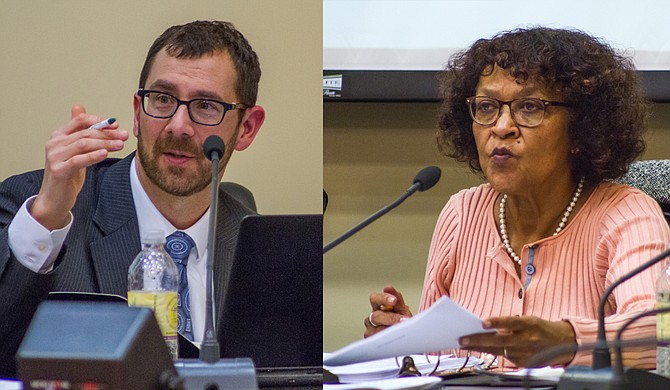 JPS Board President Jeanne Hairston (right) and Vice President Ed Sivak (left) explained the district’s need to have a bond referendum to city council members last week in a work session. Jacksonians will vote in August. Photo by Stephen Wilson.

JACKSON — Jacksonians will head to the polls in August to vote on whether Jackson Public Schools will keep its current interest rates on bonds to help fund facility improvements district-wide.

JPS board leaders say the referendum is necessary to make about $70 million available to the state's second-largest district for repairs to facilities.

"This positions us to maintain local control of our district as these facility improvements speak directly to the Department of Education's failed standards in that regard," Hairston told council members last week at a work session.

The Mississippi Department of Education found that JPS had violated 24 of the 32 accountability standards in a lengthy investigative audit last fall, moving for a state takeover as a result. Instead, Gov. Phil Bryant signed a memorandum of understanding with the district, City of Jackson and the W.K. Kellogg Foundation.

Hairston told the city council that MDE is coming back to review 12 of those 24 standards that JPS has worked to clear currently. JPS will likely clear the other 12 standards this summer, but parts of some standards require a lot of investment.

MDE found JPS to be out of compliance with facilities and safety standards, citing several schools for not having safe playgrounds or heating and cooling systems in place. Forest Hill High School, for example, does not have air conditioning in the gymnasium, the district's corrective action plan says. Hairston said about $50 million of the $70 million in bond value will address those standard violations in the CAP.

JPS has not released a final facility upgrade plan for the bond referendum yet, but board leaders hinted at what the funds will go toward. Board Vice President Ed Sivak said a large part of the funds would pay for new science labs in all the middle and high schools, except those built in 2010 or later. The investment would also reduce the district's reliance on portable classrooms.

Beyond the classroom, JPS board members discussed the need to invest in extracurricular activities to keep students engaged with the school district.

Newell Field, the football field at Murrah High School, is no longer safe for students and is at risk of not re-opening this fall, Sivak told the city council last week. If the field is not fixed, more football games will need to be played away.

Sivak said he and other board members read letters from parents about their daughters having to change on the school buses because some of the high schools do not have a women's locker room.

"Several teams now refuse to play in Jackson because of the condition of our baseball fields," Sivak said.

The last time JPS had to do a bond referendum, it had 15 months to do it, Ward 2 Councilman Melvin Priester Jr. said. Council members expressed concerns about the rushed nature of the election.

"Have (you) thought about a campaign strategy and how you would raise money to fund a campaign because you can't spend district funds on that?" Ward 7 Councilwoman Virgi Lindsay asked the JPS board officers.

"And how we would move forward with making sure this bond issue is successful since it requires 60 percent of the vote?"

Sivak and Hairston said they have been in touch with neighborhood associations throughout the city to help get a grassroots support effort going.

"We have to do this if we are serious about helping our children now. Yes, it's quick, and yes, it's short, but we started in a state of emergency, and we are still in triage and trauma recovery," Hairston said.

"I think you just wrote the campaign," Lindsay said.

The JPS Board will need to approve their referendum plan at its next board meeting on June 5. It will then send a copy of the plan to the City—although it does not need to approve it. The school board will have to cover the costs of the election, paying Jackson's election commission to run it for them. The referendum, for now, is set for Aug. 7, attorney Stephen Edds, who JPS hired to work on bonds, said.

While the bond referendum could address serious infrastructure needs, JPS is still losing money each year as more students leave for other districts or charter schools. In 2012, more than 29,000 students attended schools in the capital city; now only 25,595 students are enrolled in JPS, MDE enrollment numbers show.

"We are projecting a loss of 1,500 students next year—and the funds that come with them. The next budget cycle will be extremely challenging and will not occur without cuts," Sivak said.