City Employees Demand Raises for All, Not Just Clerks 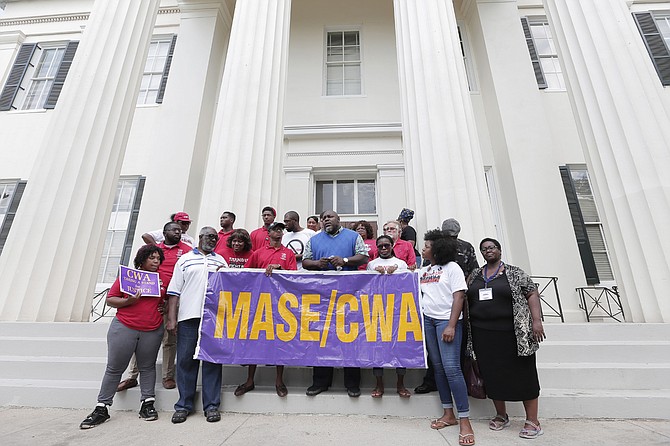 The City of Jackson’s employees’ union, the Mississippi Alliance of State Employees, Communications Workers of America, will meet Thursday, May 4, to decide next steps to protest the raises given to part-time city council clerks and no other city employees. Union members are pictured at a protest in 2016. Photo by Imani Khayyam.

JACKSON — A 911 dispatcher, a union representative and a records clerk for the Jackson Police Department walked into City Hall last week ready to give the council a piece of their minds. While this sounds like the beginning of a bad bar joke, it is the scene-setter for a grim reality: City employees are fed up with low pay and disparate treatment.

The tipping point was a recent city council vote to authorize a pay raise of over $5 more per hour for part-time city council clerks without applying raises citywide.

City workers came to the April 24 council meeting with picket signs reading "Can't Balance the Budget on Our Backs."

Among them was Jon Byrd who works in information systems for the City of Jackson.

"They're cherry-picking who should get money and who should not have money," Byrd told the Jackson Free Press.

Byrd said that he has only gotten two or three raises in his 23 years with the City.

A woman who has worked at the 911 call center for over 20 years incited cheers from the crowd inside council chambers as she asked for all workers to get the "healthy raise" the clerks got. "A $5.23-cents raise an hour for non-essential employees is a hard pill to swallow," she said. "... How in the world can the councilmen think they can justify this raise for part-time employees?"

A records clerk for the Jackson Police Department told the council that making $9.70 an hour leaves her struggling to support her 8-year-old daughter, adult daughter and two grandchildren staying with her.

She expressed the frustration of having to go to food banks or churches to get food, when Walmart employees make more than City employees—something the mayor has reiterated recently.

"We love our City so hard ... but you're not valuing the people that you do have that's still willing to stay here and stick it out with you," she told the council.

On average, each council member gets a full-time clerk and a part-time clerk, but individual council members decide how they want to run their office. Some opt for more clerks, and some have none.

The salary bump for part-time council clerks came up on the agenda when Ward 1 Councilman Ashby Foote wanted to hire a specific person for the role who he believed had a strong skill set.

Foote said the new hire did not want to work full-time, but she had the skills to be paid more than the $9.70 an hour allotted for part-time workers. 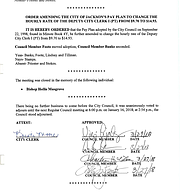 "The purpose of the pay raise was to try to find a happy medium there," he told the Jackson Free Press.

April Rigsby began working as a part-time clerk for Foote on Monday, and she and the handful of other part-time council clerks now make almost $15 an hour.

At its Jan. 18 meeting, the council voted to take the money out of the City's reserve fund to pay for the raise because there was not enough money in the clerk budget. The mayor vetoed this action on April 2, and the city council voted to overturn his veto on April 10 with a vote of 5-1—Stokes was out of the room, and Priester voted nay. The minutes from that meeting were not posted by press time.

"One of the reasons I agree with the mayor's veto is that we've got too many city workers who have not had a raise in far too long, and we have worked very hard over the last couple of years to build up the City's rainy-day funds for the storms ahead," Priester told the JFP. "There's clouds on the horizon, so I think the strategical raise is not in alignment with the goals and the opinions of most citizens or city workers."

At the council meeting last week, the mayor addressed whispering among city council members and city employees that his veto was illegal because it came three months after the council's vote.

State law says that the mayor has 10 days, not including weekends or holidays, to either approve items or veto them. Without the mayor's approval, nothing can go into effect unless he fails to return an ordinance or resolution to the council before the next meeting. The council can elect to override a mayoral veto. 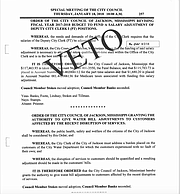 Lumumba told the Jackson Free Press that the minutes he received initially were incorrect and that he vetoed it on April 2 when he got a corrected copy. The minutes on the City's website only reflect one mayoral veto of using the reserve fund for clerk salaries. However, Lumumba told the Jackson Free Press that he also vetoed both the initial pay raise vote from Jan. 3.

Ward 6 Councilman Aaron Banks responded to the mayor's comments at the council meeting to say he had told City employees that, in his opinion, the mayoral veto was illegal because of the delay.

Banks defended his vote at the council meeting last week to raise the part-time clerks' salaries because they end up working full-time, sometimes going to events on weekends and using gas to get to various things around the City, even though they are only paid for part-time hours and do not receive benefits.

The Union Fights Back

Other city employees, however, say they work just as hard as the clerks.

Brenda Scott, union president of Mississippi Alliance of State Workers/ Communications Workers of America, said she respects the mayor, who ended furloughs for city employees early in his tenure, and she recognizes that raises will not happen overnight given the City's financial climate. Many city workers also appreciate the mayor's veto, but they still have demands.

"What we would like to see done is for the raises given to the clerks to be rescinded until the administration and the council as a team can identify resources and funding in order to give all of the city employees a raise," Scott said.

Foote told the Jackson Free Press that he is not going to try to rescind the item because he accomplished what he set out to do, and he wishes the council was in a position to give everyone a pay raise.

Scott said she and other union leaders, as well as city employees, will meet Thursday to come up with the next steps to make their presence and dissatisfaction known.