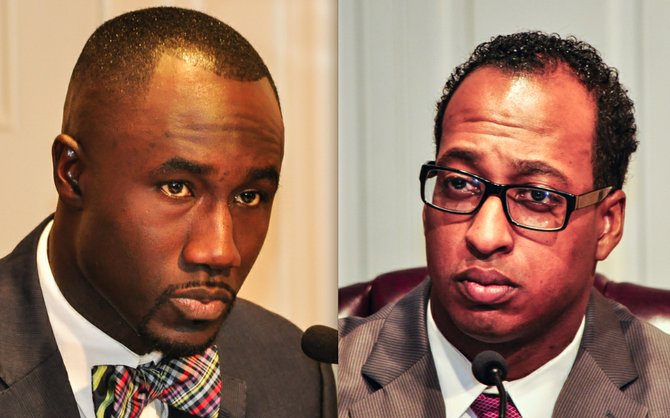 Mayor Tony Yarber and council members like Ward 2 Councilman Melvin Priester Jr. (right) came to loggerheads over several issues, including last-minute additions and the mayor's reticence in implementing a $120,000 pay increase for city workers earning minimum wage even as he is increasing pay for three city departments by almost $500,000. Photo by Trip Burns.

Yarber and the council came to loggerheads over several issues, including last-minute additions and the mayor's reticence in implementing a $120,000 pay increase for city workers earning minimum wage even as he is increasing pay for three city departments by about $500,000.

The meeting grew noticeably tense when Yarber indicated that he would not move forward with a pay increase for city workers earning the minimum wage that the city council passed recently. Currently, the minimum wage for city employees mirrors the national minimum wage of $7.25 per hour. Under the new plan, the wage would rise to $8.75 per hour within a year. Yarber said moving forward with the increase would throw the budget off balance.

Council members took exception to Yarber's explanation, they said, because the mayor's budget staffers had advised the council throughout the development of the pay-raise plan and determined that it would only cost about $120,000 a year. In addition, the council said it agreed to let the mayor "staff up" in several departments.

From 2013 to the budget passed this week, salaries in the mayor's and chief-administrative officer's office increased by $480,781.

"If we can pay the mayor and CAO's office a half-million dollar increase (for salaries), then we don't need to be paying slave wages to people who are out there filling ditches," Ward 2 Councilman Melvin Priester Jr., who chairs the Budget Committee, told the Jackson Free Press after the meeting.

The city attorney's office also jumped from $1.9 million in 2013 to just over $2 million under the current budget.

As an alternative to the minimum-wage raises, Yarber suggested a feasibility study be done, arguing that the council had not considered the effect of implementing the raises on vacant positions. The move seemed to blindside the six members who attended. Ward 7 Councilwoman Margaret Barrett-Simon lambasted Yarber's refusal to implement the council's action, which she called historic.

"If the council can be ignored on something like this, then what are we doing here?" she asked.

During the meeting, Priester offered a compromise in order to meet the legal requirement to finish the budget by Sept. 15, instructing Yarber's administration to find a way to implement the minimum-wage hike or the council would come back later and take back salary increases now going to department heads and other top-tier staff members.

The budget passed 5-to-1. Ward 3 Councilwoman LaRita Cooper-Stokes voted no; Ward 1 Councilman Quentin Whitwell did not attend the meeting. The council can revise the budget to reflect changes through the end of the month.

That wasn't the only bone of contention, however. Members grumbled about several last-minute changes to the already 417-page budget proposal they received on Wednesday, Aug. 20. Yesterday, on the morning they would vote on the budget, Yarber's office sent a 25-page addendum full of expenditures that would grow the plan by about $2 million.

Members complained that they did not have enough time to fully review the documents.

"They had eight months to prepare a budget, and we had eight or nine working days," Council President and Ward 4 Councilman De'Keither Stamps told the Jackson Free Press after the meeting of the city's administration department.

Stamps also pointed out that the council received the budget recommendation one day before the city was required to set the millage rate for the year, which determines how much the city collects in property taxes. The rate ultimately rolled property taxes back to 2013 levels, which Stamps and Priester say equals a property tax cut of about $5 million.

Other changes that drew ire from the council included an increase in city lobbying services from $80,000 to $136,000. The budget book council members received lists $56,000 for lobbying.

Yarber said that the administration realized additional needs after the budget book was printed. He has asked the council to approve contracts to hire two lobbying firms, one to petition the state Legislature and another for Congress. Yarber had asked the council to approve a professional services contract with Hayes Dent Public Strategies last week, but the item was held.

Formerly the chief of staff for late Republican Gov. Kirk Fordice and GOP nominee for Congress in the 2nd Congressional District in 1993, Dent is one of the state's most powerful lobbyists. Dent is also the principal owner of a firm that Jackson Mayor Tony Yarber hired during his mayoral campaign earlier this year.

Other last-minute changes to the budget included a $19,000 pay hike for deputy chief-administrative officer for external funding LaSeine Hilliard to bring her salary in line with that of her male counterparts—deputy CAOs Marshand Crisler and Aaron Banks—Yarber said. Each deputy will earn $71,838.96 per year under the amended budget.

In addition, the city clerk's office received $27,000 more to make current part-time employees full-time with benefits as well as to provide what Yarber called "small raises" for existing clerk staffers.