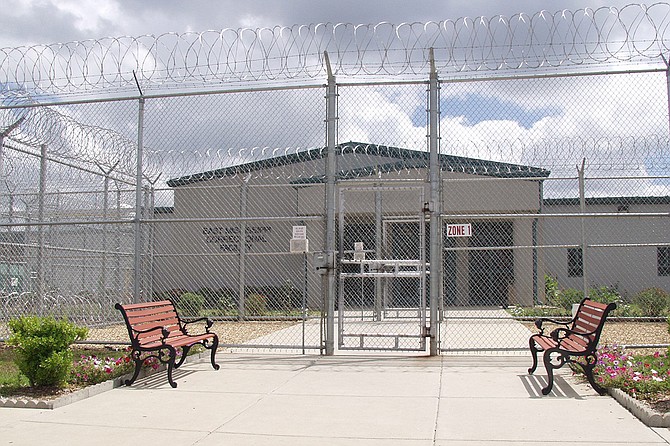 JACKSON — Terry Beasley remembers a white guy locked in his cell in East Mississippi Correctional Facility one night in 2017, dying. "He was blue," Beasley, an inmate serving a life sentence for a homicide-murder conviction, said in U.S. District Judge William Barbour's courtroom on Friday, March 9.

Some inmates started banging on their windows to try to get the officers' attention, but it took more than an hour for officers to come down to the man's cell from what he could tell from his own cell that night, Beasley said. Eventually, medical staff and the captain came into the zone and recovered the man's body.

"It made me feel scared because I'm a diabetic, and you never know when your sugar (could) drop," said Beasley, who is also asthmatic and diabetic.

Beasley used to clean out cells at the prison in Lauderdale County. On the stand, he described life "in the zone" at one of Mississippi's three private prisons in federal court. He testified that he misses his morning insulin treatment "a lot" whenever the officer in the tower does not let him out of his cell to go get the medication.

The Southern Poverty Law Center, the National Prison Project of the ACLU and two other law firms brought a class-action lawsuit against the Mississippi Department of Corrections back in 2013 due to conditions at EMCF. After the department refused to settle twice, the case went to trial this month in what is expected to be at least a month-long ordeal.

Operated by the Utah-based Management and Training Corporation since 2012, EMCF is one of three private prisons in the state that MTC operates. MDOC is responsible for the facility and stations a monitor there to track how the facility operates. More than 80 percent of the inmates there are on some type of mental-health medication or treatment protocol.

The lawsuit alleges that conditions at the prison violate the Eighth Amendment rights of prisoners housed there. Attorneys must prove in court that inmates receive "cruel and unusual punishment" as a result of being housed there.

The State of Mississippi hired two private law firms to defend MDOC in the case. Their position is that the department is not "deliberately indifferent" to the treatment of inmates at the prison. In his opening statement, W. Thomas Siler Jr. encouraged Judge Barbour to go see the facility for himself. He said EMCF has made great strides and changed a lot since MTC took over the facility in 2012.

"We disagree with their conclusion that we're not adequately staffed," Siler said, noting that many of the issues with the facility and with contraband are "issues caused by sabotage by inmates."

Attorneys defending the state asked the judge to take anecdotal evidence with a grain of salt, emphasizing that the focus of the case needs to be on whether or not the state has violated the Eighth Amendment rights of prisoners.

"Are any of the issues they're complaining about current and ongoing?" Siler said.

Warden Frank Shaw, who runs the prison, is sitting in on the trial, and the State plans to call him as a witness and use him to represent one of the named defendants in the case. The lawsuit names Department of Corrections Commissioner Pelicia Hall as well as Gloria Perry, the chief medical officer at MDOC, and Archie Longley, the deputy commissioner of institutions. Shaw is a Management and Training Corporation employee, however. The private company is not a party to the lawsuit, however.

"The state is responsible for whether it's run properly, and that's what at issue," Judge Barbour told the court last week.

Inmates wore black-and-white striped bottoms, chains around their waists jangling and white tops with the words "MDOC INMATE" across the back. They sat right across the room from the State's attorneys and Shaw. Attorneys representing the prisoners plan to have at least two inmates in the courtroom every day throughout the trial. They will call some of the prisoners as witnesses as the trial unfolds.

In the first week, the plaintiffs called nine witnesses, beginning with Eldon Vail, a 35-year veteran corrections officer and operator from Washington state. Vail visited the prison once in 2014 and again in 2016 to evaluate the state of the prison, including safety, security and staffing levels.

"I concluded that it's a very dangerous facility," Vail testified last week, saying that the "basics" were missing.

"There are not a sufficient number of correctional officers, and most of their problems stem from that issue."

Vail reviewed thousands of documents and conducted interviews the plaintiffs' attorneys arranged. He could not interview prison staff, however. MDOC keeps a monitor at the Meridian private prison to report progress and inadequacies at the facility. The weekly and monthly monitor reports confirmed and reinforced his initial conclusion about the facility, he testified.

"You see the same kinds of issues occurring over and over again," he said.

'Logic Is Not Logic'

Staffing concerns and who is responsible for what happens inside prison walls came up repeatedly in testimony. The inmates who worked as porters in 2015 and 2016 cleaning cells testified to seeing fires daily and cleaning up blood after inmates stuck their hands out of their cells' food slots or from cutting themselves.

The facility, like most prisons in the state, has a contraband problem. In March 2017, visiting privileges at the prison were suspended after back-to-back contraband shakedowns revealed that inmates were posting on the Internet, presumably from contraband cell phones.

"MDOC officials searched a specific section of the facility after learning of an inmate posting live on Facebook last weekend," a March 7, 2017, press release from MDOC says.

Attorneys representing the State said that a lot of incidents—from fires to contraband cell phones to self-harm incidents—are the inmates' fault. How far responsibility stretches to the State—and MTC's employees by extension—to keep the facility in order is at the heart of the case.

Eddie Pugh, an inmate who sat in court all last week and testified Friday, described an incident late last year when a new inmate came to his housing unit. Correctional officers expected inmates to choose where the new inmate would live, Pugh said, and when inmates refused to find him a place, they were put on lockdown.

"We were in the dark for three weeks; we were forced into the cells at gunpoint," Pugh said in court last Friday.

Pugh told the court about how some inmates force others out of their cells and have to sleep on the floor of other cells.

"Do the gangs make that decision?" Judge Barbour asked him.

"To truly understand EMCF, you'd have to be there more than one time...," Pugh responded.

"Why shouldn't every man have his own bed?" Barbour asked.

The trial continues this week, as attorneys representing inmates have about two-and-a-half more weeks of testimony to offer. Defendants will not take nearly as long, Siler told the court.