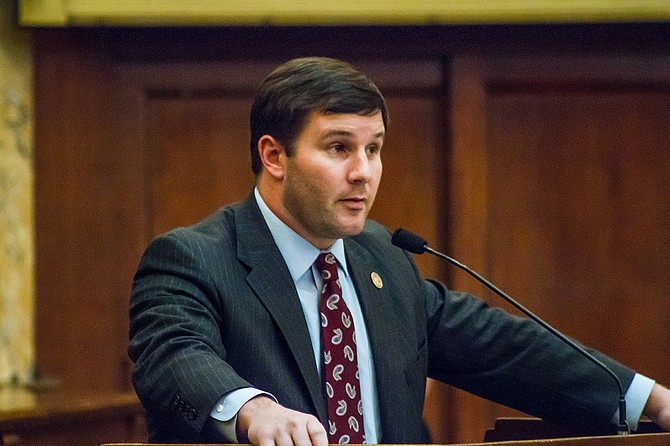 Rep. Trey Lamar, R-Senatobia, said House Bill 722 is "the most significant piece of legislation" he has seen in his time at the statehouse. Photo by Stephen Wilson.

The Mississippi House of Representatives voted to use approximately $108 million in tax revenue for roads and bridges on Thursday in a bipartisan vote. House Bill 722 will divert 35 percent of the state's use tax collections to cities, counties and a grant program to pay for infrastructure.

The Department of Revenue collects use tax on goods residents purchase that are shipped and delivered into Mississippi from out-of-state. Recently, some online retailers including Amazon began to voluntarily collect the tax for the state. All brick-and-mortar stores here already collect the use tax on purchases.

Rep. Trey Lamar, R-Senatobia, who has previously pushed for use tax collections to go to roads and bridges, presented the legislation on the House floor Thursday.

"House Bill 722 is the most significant piece of legislation that I've seen in my time here," he said. "It's designed to provide a new dedicated stream of revenue back to the cities and counties of this state specifically earmarked for road and bridges repair."

The legislation divides the 35-percent diversion of use tax into three categories: 15 percent for cities, 15 percent for counties, and 5 percent for a grant program that the Mississippi Development Authority will administer to cities and counties that apply. County and city supervisors will have the authority to spend the funds on roads and bridges as they see fit, Lamar told representatives.

The more than $100 million sales-tax diversion will come out of general-fund revenues, however, meaning that lawmakers will have to cut other state agency budgets in order to pay for the legislation.

"Do you know what are we going to cut to pay for it?" Rep. Jarvis Dortch, D-Raymond, asked Lamar.

"I don't," Lamar said, noting that the House does not want to cut K-12 education funds to help pay for it. "... We're going to have to make those tough decisions."

Rep. Thomas Reynolds, D-Charleston, offered an amendment that named House Bill 722 the "Improve Mississippi Act of 2018," and said the Legislature intends the bill to be the first phase in a comprehensive road plan.

"It will do some real good. We have right now a transportation crisis in this state," he said.

Reynolds' amendment was not popular with everyone. Rep. Mark Baker, R-Brandon, spoke against it. "I don't think now is the time to pat ourselves on the back for doing anything for the people," he said.

House Ways and Means Chairman Jeff Smith, R-Columbus, said he did not care what the House did with the amendment, and it ultimately passed 60-53, with several Republicans voting for it.

House Bill 722 passed 118-0, moments later. The legislation will have to survive in the Senate to be a reality. Laura Hipp, Lt. Gov. Tate Reeves' communications director, would not specify his thoughts on the proposal. Last session, he was adamantly opposed to directing use taxes to pay for infrastructure needs.

"The Senate will review the proposals sent over by the House and will work over the next three months to find a solution to support infrastructure maintenance," she told the Jackson Free Press.