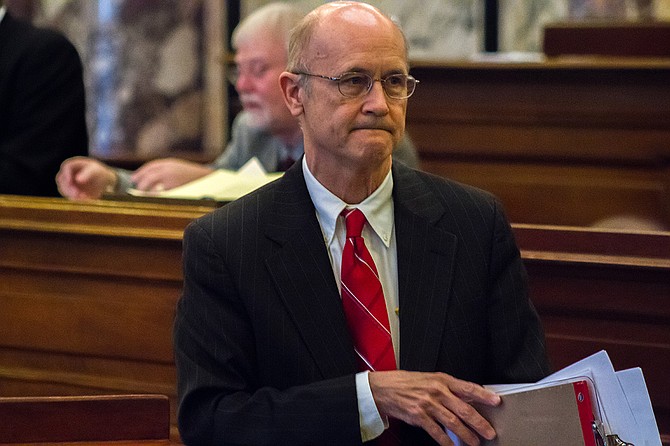 Several longtime Democratic lawmakers, including Sen. Hob Bryan (pictured) of Amory and Rep. Steve Holland of Plantersville, said too few senators or representatives had a chance to be meaningfully involved in vetting issues all were asked to consider in a short time. Photo by Stephen Wilson.

JACKSON, Miss. (AP) — When Mississippi lawmakers met in special session to deal with transportation funding, they agreed relatively quickly on issues that had been tangled in arguments for months or years.

They voted to create a state lottery, over objections of Baptist and Pentecostal groups that usually hold considerable influence in conservative politics.

They agreed cities and counties will receive a portion of sales tax revenue the state collects when people shop online. They also agreed that taxes the state collects on sports betting in casinos will be used, until 2028, to help pay for highways and bridges.

Legislators passed a bill to divvy up hundreds of millions of dollars that Mississippi is collecting after the 2010 Deepwater Horizon oil spill in the Gulf of Mexico, with most of the money going to the six southernmost counties.

They also authorized the state to issue $50 million in bonds to create a Transportation and Infrastructure Improvements Fund to pay for local roads, bridges and "other projects that are economically beneficial." Legislators approved the first list of projects, with critics calling it a "Christmas tree" because it had goodies for 63 of the 82 counties.

Democratic and Republican legislators stood on a stairway behind them, and Reeves said the public should note the session's bipartisan goodwill.

There was, of course, disagreement during the session.

Several longtime Democratic lawmakers, including Sen. Hob Bryan of Amory and Rep. Steve Holland of Plantersville, said too few senators or representatives had a chance to be meaningfully involved in vetting issues all were asked to consider in a short time. Republican Rep. Noah Sanford of Collins was among the most outspoken critics of the list of local infrastructure projects, because his home of Covington County was among the places receiving no love.

Some lawmakers said important details of the lottery bill were rushed, although even critics said policymakers have had a generation to consider the general pros and cons of a lottery.

Mississippi voters repealed the state constitution's lottery ban in November 1992, but creating the game of chance requires legislative approval. Many officials have seen the lottery as a no-win situation — voting for it could alienate people who have moral objections to state-sponsored gambling, but voting against it could alienate those who want a lottery as a form of entertainment.

Bryant pushed the lottery bill by saying Mississippi had been losing millions of dollars a year to Louisiana, Arkansas and Tennessee as residents crossed state lines to buy tickets. Republican House Speaker Philip Gunn is a leader in a Baptist church in Clinton and has long opposed a lottery, but allowed the House to vote on the issue in special session.

The lottery bill received bipartisan support — and opposition — in the Republican-led House and Senate. Legislators named it the "Alyce G. Clarke Mississippi Lottery Law" to honor the Democratic state representative from Jackson who filed lottery bills for years. Bryant promises to sign the bill into law and says it will take months to get a lottery up and running.