'We're the Pigs': House Jumps the Gun(n) on Transportation Funding 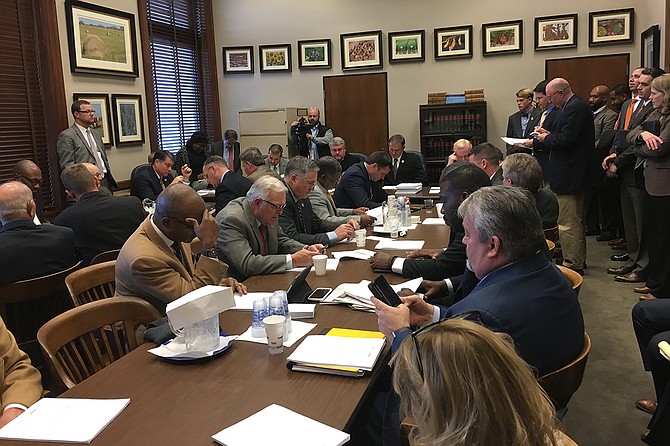 Three House committees met on Wednesday, Jan. 3, and passed out a package of bills that could divert more funding to the state's roads and bridges. Photo by Arielle Dreher.

Appropriations Chairman John Read, R-Gautier, asked his committee to support two bills in its meeting on Wednesday afternoon. The first measure would allow half the general-fund revenue growth in the state above 2 percent to go into a special fund for roads and bridges.

"How many times have we had money over (2 percent set aside)? We've been taking the 2 percent to make the budget work, have we not?" he asked.

"You are correct, but we are a little bit more optimistic this year," Read said. He later acknowledged that this bill is a mechanism to get additional funds to roads and bridges, if the revenue is there.

Read also asked the Appropriations Committee to vote on a bill to completely pull the Mississippi Department of Transportation out from under the control of the State Personnel Board.

Rep. William Arnold, R-Booneville, asked if Read or anyone else on the committee knows what MDOT plans to do outside of the State's control.

Read said he had just gotten off the phone with the department only five minutes before the seemingly rushed meeting.

"The Department of Transportation has said there will be no dismissals of anyone," Read said. "They are re-aligning some PINS (positions) for some raises, maybe for some engineers, and moving some money around."

The Appropriations Committee passed both bills in about 10 minutes, while across the hall, the Ways and Means Committee also passed two different transportation-related bills.

The House Ways and Means Committee passed a measure that will divert voluntary-use tax revenue to roads and bridges funding above the first $50 million the state receives from voluntary collectors like Amazon, which do not have a physical location in the state but defer their online sales-tax revenue to the state anyway.

The bill allows the Department of Revenue to collect up to $250 million of these voluntary taxpayer funds. The committee also passed a bond bill that will help municipalities, counties and the State pay for roads and bridges.

The final piece of the five-part legislative package, House Bill 359, went through the Transportation Committee later Wednesday. The legislation would create a moratorium on any new construction projects, essentially stopping MDOT from starting construction on any projects of which it has not purchased the right-of-way.

The group had to wait 20 minutes for the 100-page bill to be printed, and then Transportation Chairman Rep. Charles Busby, R-Pascagoula, and Vice Chairman Rep. Steve Massengill, R-Hickory Flat, asked the committee to support the measure. Busby said he was not expecting the meeting and was also not wearing a tie. He let Massengill take the lead in the meeting.

Members of the committee were concerned about the bill, and they made several amendments. Holland still spoke against the bill.

"This is like one snowflake falling on the landscape and calling it a tsunami of snow," Holland said.

"If there was a desire to build new roads, they (MDOT) don't have the money to do it," Rep. Robert Johnson, D-Natchez, said. "So what we're doing here sounds good and looks good, and puts lipstick on a pig, so to speak, and we're the pigs. So it makes us look good, but as a matter of fact, we don't have any money to build roads—it's a red herring."

Even Chairman Busby agreed, saying that all five of the measures the committees passed on Wednesday do not fix Mississippi's infrastructure problem.