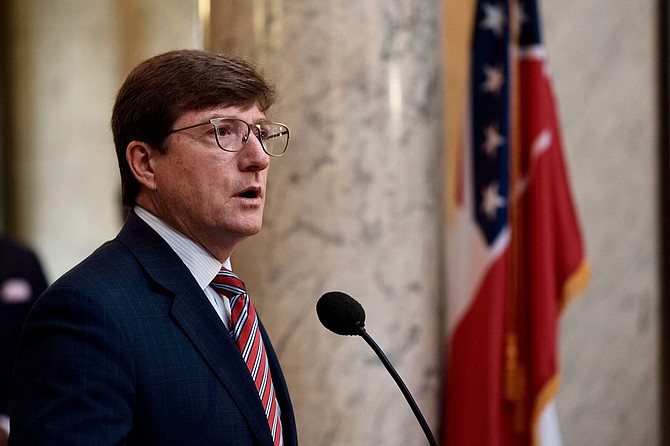 The lottery, which Republican Gov. Phil Bryant supports, is expected to generate $40 million in its first year and $80 million in following years, all allotted to pay for repairs to the state's crumbling roads and bridges. In March, Bryant ordered more 100 dilapidated bridges closed for the next ten years.

'Disproportionately on the Poor'

McDaniel, a conservative who opposes expanding government and creating new taxes, said in a Clarion-Ledger guest column last week that the lottery betrays conservative principles by creating what he considers to be a tax on working people to make up for a lack of infrastructure funds.

"With Americans spending nearly $75 billion per year buying lottery tickets, it is, for all practical purposes, a tax that predominantly hits the middle class and the poor, with the bulk of the burden falling on the latter," McDaniel wrote.

"A lottery is a regressive tax that falls disproportionately on the poor," Bryan said, adding that he considered the bill "a numbers racket."

"The people who can least afford it are throwing away on average 47 cents on the dollar every time they buy a ticket. And the government, which relies increasingly on the lottery for funding, goes out of its way to tell them it is a good idea."

Unlike McDaniel, Baria supports creating a state lottery, which he voted for five times in the past, but said he voted against the bill that ultimately passed because it sends all funds to roads and bridges and none to education.

"This is the only opportunity to direct where lottery proceeds will go that we will have for at least a decade," Baria wrote on Facebook Wednesday. "For that reason, I felt I had to vote no on this lottery bill."  An earlier version of the bill, which the House passed, included an amendment by Baria directing $12 million to fund classroom supplies, but the Senate stripped that amendment in conference Monday.  Explaining his vote, Baria directed his followers to a Tuesday morning Facebook post by Mississippi Rep. Lataisha Jackson, D-Como.

"I represent low tax base areas where the main industry in the areas is the local high school or elementary school," Jackson wrote. "The schools are the largest employers. The buildings are decrepit. The students lack individual textbooks. They do not have the luxury of receiving individual laptops like other districts. One might say that these things do not impact learning outcomes, teacher retention, or teaching students. I beg to differ."

While she is "grateful" the Legislature will assist low tax base areas like hers with road and bridge repair, Jackson said education needs funding, too.

"We cannot afford not investing in our children," Jackson wrote.

McDaniel Says 'No' to Other Funds

In addition to the lottery bill, McDaniel voted against the Mississippi Infrastructure Modernization Act, which Bryant signed into law Wednesday. It allots $120 million a year to road and bridge repair using revenues generated by casino sports betting, the Internet sales tax, and an annual tax on owners of hybrid and electric cars.

An opponent of the Internet sales tax, McDaniel said the tax "will be forever codified" in state law now that it is attached to infrastructure funding.

McDaniel also criticized the tax on hybrid and electric cars, which proponents say makes up for owners not contributing through gas taxes.

"We just increased taxes on hybrids and battery-operated vehicles," McDaniel said. "When was that ever the Republican platform, that we started raising taxes on anything? And why should we punish those who are attempting to make decisions in the marketplace?"

Long ago, he said, lawmakers should have set aside money for road and bridge repair, rather than waiting until an infrastructure emergency.

"There's a reason we remain dead last," McDaniel said. "We can't seem to fashion economic policies that benefit the state as a whole and create an environment that for productivity. Instead, we lurch from crisis to crisis and tax and tax and spend and spend."

Baria voted for the infrastructure bill.

McDaniel voted against a third bill that allocates 75 percent of the $700 million that BP paid the state for damages the 2010 Deep Horizons oil spill caused to coastal counties, with the remaining 25 percent going to the rest of the state.

"Mississippi's lower six coastal counties deserved 100% of the state's BP settlement funds," McDaniel tweeted. "The Deepwater Horizon was a coastal disaster, and should've been handled as such."

Baria, who represents that part of the Coast, said he was "very happy" with the bill, which Bryant signed into law Wednesday.