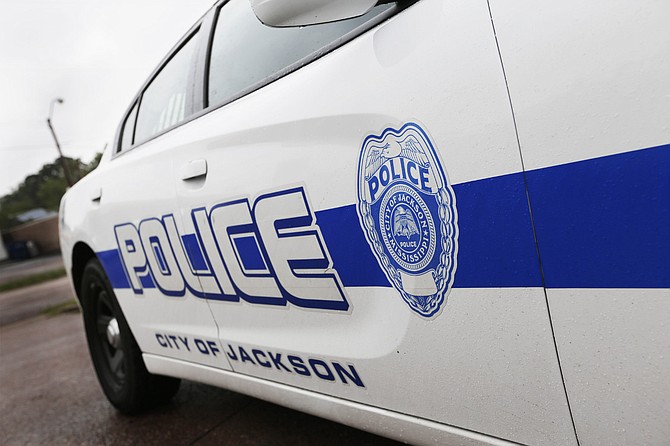 Pending council approval on at the meeting Aug 28, 2018, the Jackson Police Department seeks to get body cameras from Axon on a 30-day free trial. Photo by Imani Khayyam.

JACKSON — The Jackson Police Department will seek Jackson City Council's approval for body cameras through a month-long trial with Axon, the company formerly known as TASER International. The cameras will come at no cost to the City of Jackson, supporting council documents show.

The Scottsdale, Ariz.-based company supplies TASERs and other law-enforcement technologies such as body-worn cameras to more than 17,000 agencies in 100-plus countries worldwide, the company's website says.

Police nationwide have increased the number of body-worn cameras since 2014 when officer Darren Wilson gunned down teenager Michael Brown in Ferguson, Mo. However, as the Jackson Free Press previously reported when JPD asked for council permission in May 2018 to apply for the U.S. Department of Justice's Body-Worn Camera Policy and Implementation Program, body cameras are not a cure-all for transparency.

The Body-Worn Camera Scorecard, which Upturn, a non-profit focused on equity in digital technology, and The Leadership Conference, a coalition centered around legislative advocacy, updated in 2017, lists five civil-rights principles relating to body-worn cameras: develop policies in public; commit to a set of narrow and well-defined purposes for camera use; specify clear operational policies for record, retention and access; make footage available to promote accountability; and prohibit officers from viewing footage before filing their reports.

This report also points to the shortfalls of cameras in communities of color such as Jackson.

"[C]ameras could be used to intensify disproportionate surveillance and enforcement in heavily policed communities of color," The Leadership Conference on Civil and Human Rights & Upturn report reads. "Without carefully crafted policy safeguards in place, there is a real risk that these new devices could become instruments of injustice, rather than tools for accountability."

The Scorecard also reports that of 69 major-city police departments, 62 have body-worn camera programs and policies in place. Of those, more than a third do not make body-worn camera policies accessible to the public on department websites. At least 55 allow officers to have "unrestricted footage review" of camera footage, including before filing police reports. None included in the scorecard have "blanket limitations" on when officers can review footage.

Apparently, JPD does not yet have a body-worn camera policy in place, and could use this free-trial period to develop one.

"The trial will also assist the department with the development of policies and procedures prior to the purchase," Interim Chief James Davis wrote in a July 23 memo to the mayor.

JPD has a history of not being transparent. Mayor Chokwe Antar Lumumba implemented an officer-involved-shooting task force this spring to develop policy around officer-involved shootings because the department has a "longstanding practice," as the mayor puts it, of not releasing names or subsequent investigatory details after officers shoot, and even kill, citizens.

Since Lumumba has taken office, there have been at least nine of those shootings, detailed here.

Reporters and citizens used to get the basic details about those incidents. However, since the Jackson City Council approved a memorandum of understanding with the Mississippi Bureau of Investigations in May to have the state agency handle all officer-involved shootings, JPD releases far less information about officer-involved shootings, deferring to MBI instead. However, the agency does not give out information on open or closed investigations.

The mayor's officer-involved-shooting task force promised to vote on a finalized version of policy recommendations at its next meeting, slated for Aug. 27 at 6 p.m.

The city council meets today at 4 p.m. for a work session and will conduct a formal meeting at 6 p.m. on Aug 28 at City Hall in downtown Jackson to vote on this issue.

CORRECTION: This story has been upated to reflect the correct time for the Aug 28 city council meeting: 6 p.m.