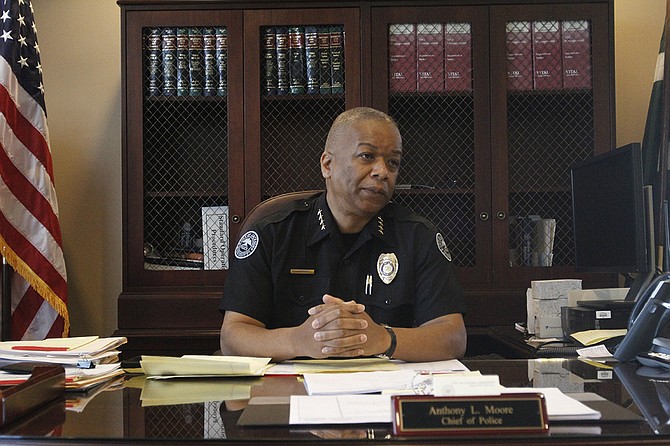 JACKSON — The Jackson Police Department hopes to equip its officers with body cameras and increase its "community policing" capacity with funds from U.S. Department of Justice. Pending grant applications also ask the DOJ for assistance with mental-health training.

Funds for body cameras would come from the U.S. Department of Justice's Body-Worn Camera Policy and Implementation Program. The grant requires a 50-percent match fund match, and JPD has requested $600,000 from the DOJ.

"The (Body-Worn Camera Policy and Implementation Program) addresses the development and implementation of policies and practices for effective program adoption, and includes factors such as the purchase, deployment, and maintenance of camera systems and equipment; data storage and access; and privacy considerations," the program description reads.

Officer-involved shootings have plagued Jackson in the last year, with at least seven since last July. JPD does not traditionally identify officers who fire on residents or the specific circumstances of the incidents. Mayor Chokwe A. Lumumba has convened a task force to recommend an updated policy on officer-involved shootings, which has met for two months to date.

The Jackson City Council unanimously gave its support to the body-camera application due on the last day of May. But, some brought up concerns about policy around the cameras should the City receive them.

"People have a right to privacy," Ward 4 Councilman De'Keither Stamps said at the May 22 city council meeting. "If a police officer shows up to a domestic situation, should the public be able to do an open-records request for those moments?"

Body cameras, while helpful in some cases, are not cure-alls. A BuzzFeed News investigation from January 2017 titled "Blue Lies Matter" showed that video evidence opened a floodgate into the reality that sometimes officers tell a different story from what the cameras reveal.

"Cameras prove cops lie, and there are more cameras out in the world today than ever before," BuzzFeed reporter Albert Samaha wrote in the article. "... Officers lie in high-profile cases and little-known cases, and lie by fabrication, omission and exaggeration."  Mitigating Risks of Body Cameras

The nation saw broader demand for body cameras following the Michael Brown shooting in Ferguson, Mo., as an unbiased intermediary to reveal the facts of a case. A 2017 report on body-worn cameras points to the benefit of transparency, but the need for policies to protect the community.

"[C]ameras could be used to intensify disproportionate surveillance and enforcement in heavily policed communities of color," The Leadership Conference on Civil and Human Rights & Upturn report reads. "Without carefully crafted policy safeguards in place, there is a real risk that these new devices could become instruments of injustice, rather than tools for accountability."

The city council also approved JPD to move forward with an application for The Justice and Mental Health Collaboration Program under the DOJ. This grant program would give JPD the funds to "support cross-system collaboration to improve responses and outcomes for individuals with mental illnesses or co-occurring mental illness and substance abuse who come into contact with the justice system."

The DOJ program description also points to the national surge in suicides and how untreated mental illness can lead to self-injury. In 2016, more suicides than homicides occurred in Mississippi.

The council also approved the police department moving forward with a grant to help the City implement community-policing strategies. The DOJ's Community Policing Development funds will give up to $10 million subject to availability to fund projects related to "increase awareness of effective community policing strategies, increase the skills and abilities of law enforcement and community partners, increase the number of law enforcement agencies and relevant stakeholders using proven community policing practices and institutionalize community policing practice in routine business," the application description reads.

"Community policing" is a popular buzz phrase in law enforcement that is often used just to indicate police interacting with the community more often, but crime experts warn that there is much more to community policing if meaning change is to result.

The Community Oriented Policing Services division of the DOJ has explained that it is a strategy for law enforcement to be "proactive" rather than to just react to crimes after they occur or with traditional police practices.

"Community policing emphasizes proactive problem solving in a systematic and routine fashion," the COPS website explains. "Rather than responding to crime only after it occurs, community policing encourages agencies to proactively develop solutions to the immediate underlying conditions contributing to public safety problems. Problem solving must be infused into all police operations and guide decision-making efforts. Agencies are encouraged to think innovatively about their responses and view making arrests as only one of a wide array of potential responses."

In many cities, including New York City, community-policing strategies have resulted in an overhaul of the police beat system, with more officers walking the streets of neighborhoods rather than riding in squad cars in order to react better with residents and potential criminals. This can increase intelligence gathering and builds better relationships, including with young people at risk of making poor decisions.

It also means looking harder at the causes of crime in order to prevent them. "Community policing puts new emphasis on tackling the underlying causes of crime by addressing problems at the grassroots level," a DOJ Bureau of Justice Assistance report explained.

In order for police to better ineract with the community in ways that might prevent crime, they require more training and, often, a shift a mindset about police work. The public must think about policing differently as well, including only using 911 to report true emergencies.

"To maximize the time that the patrol officer can spend interacting with community members, community policing encourages the use of the 911 system only for true emergencies. Nonemergency calls should be handled through other means, including delays in responding and report handling by the police station or sheriff's office over the telephone or by mail," that report said.

Good systems are key to community-policing success, as are adequate resources to overhaul dated law-enforcement strategies. "Efficiency must be built into each aspect of the community policing strategy—from the creation of community boundaries that cultivate productive alliances to the adoption of technologies that increase communication," the BJA report said. "Expanded and thorough training is paramount in an efficient shift to community policing. Intensive training, although initially costly in terms of dollars and time, will eventually make the process more efficient, as well-trained and experienced personnel share practical knowledge with colleagues."