Baria: 'My Son Will Feel Pain' When He Looks At Mississippi's Flag 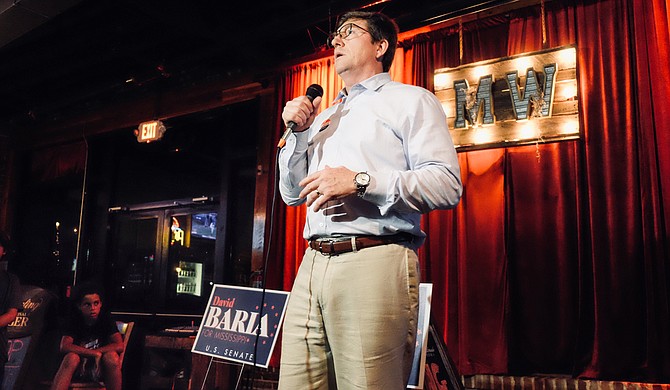 After winning the Democratic primary for U.S. Senate on June 26, 2018, Democrat David Baria speaks to a crowd of supporters in Gulfport, Miss., while his son, Max, 10, watches nearby. Photo by Ashton Pittman.

JACKSON — The people of Mississippi have "a duty to acknowledge that hatred and racism remain alive and well in America today," Mississippi State Rep. David Baria, the Democratic nominee for U.S. Senate, wrote in a Facebook post on Sunday. He said that Mississippi's flag, with the Confederate battle flag in its canton, emboldens hate groups.

The comments came exactly one year after white supremacists carrying the Confederate flag and the flag of the Third Reich marched violently in Charlottesville, Va., injuring dozens and killing Heather Heyer, 32, who was part of a group of anti-racism counter-protesters. Baria called it "one of the darkest chapters in American history."

"We must be wary of leadership that refuses to call out hate by name," Baria wrote. "And while cynical politicians concerned more about re-election assent to hate groups with a wink and a nod, their refusal to condemn hateful behavior makes them complicit in those actions."

"We have the obligation to denounce not just hate but those who refuse to condemn it. Which is why as Mississippians it is long past time for us to address our own shortcomings."

Baria then turned to the topic of the state flag, which many Mississippians defend, with most of them voting to keep it in place in 2001.

The flag is personal for Baria; his son, Max, 10, is mixed race.

"My son will feel pain when he looks up at our flag. He just doesn't fully know why yet," Baria wrote. "At 10 years old, he hasn't fully learned about the dark time that flag symbolizes—but too many of our citizens feel pain every day when they see our flag. No one should feel unwelcome in their home—and every day that flag is up it sends a message to thousands of Mississippians that they are not wanted in this state.

"It breaks my heart that as a father I will have to explain why the state he loves continues to embrace a symbol of hatred—a conversation that too many parents across this state have had to have with their children for generations."

In May 2017, after he had made his position on changing the flag public, Baria wrote a different Facebook post in response to angry constituents.

"Max is a mixed-race child who will one day when he is a grown man recall that I was an elected official in Mississippi at a time when these weighty issues were discussed," Baria wrote at the time. "And Max will know that his father considered how he may feel about these symbols of racial hatred and oppression, and that his father took a stand. Right or wrong, my family, and especially my son Max, will know that I did what I thought was right. I can only hope that you too will understand."

"After reflection and prayer, I now believe our state flag should be put in a museum and replaced by one that is more unifying to all Mississippians," Wicker said in a June 2015 statement. "As the descendant of several brave Americans who fought for the Confederacy, I have not viewed Mississippi's current state flag as offensive. However, it is clearer and clearer to me that many of my fellow citizens feel differently and that our state flag increasingly portrays a false impression of our state to others."

Since then, Republican State Sen. Chris McDaniel has attacked Wicker for his position regularly. He announced a primary challenge against Wicker in February, but switched to the U.S. Senate special election race that opened up after former U.S. Sen. Thad Cochran announced his retirement in March.

Speaking at the Neshoba County Fair in Philadelphia, Miss., in early August, McDaniel rallied dozens of supporters who carried replicas of the state flag. Later, when Wicker spoke, McDaniel supporters waved the flags as they jeered at him.

The Mississippi state flag was first adopted in 1894. In 2001, 64 percent of Mississippians voted along racial lines to keep the current design in a non-binding referendum.

Both of Mississippi's U.S. Senate elections will be held on the same day as the national midterms on Nov. 6, 2018. Polls in Mississippi are open from 7 a.m. to 7 p.m.