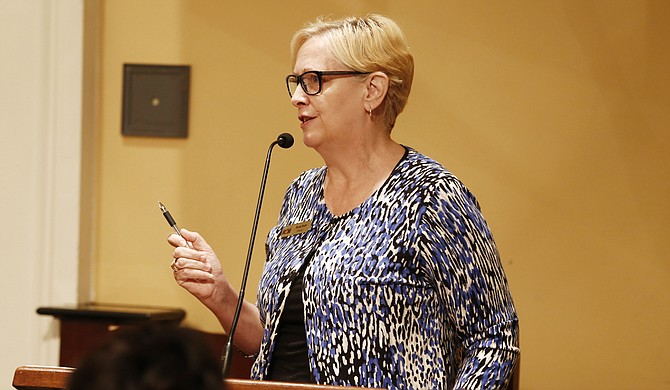 JACKSON — The Jackson Zoo is asking for donations in wake of its financial crisis due to budget cuts made in the past year.

At the Aug. 21 Jackson City Council budget hearing, the zoo's director, Beth Poff, presented a proposed budget of $1.5 million to the members and the mayor in order to cover the needs of the 100-year-old park and 375 living animals. Poff says the proposed budget for fiscal-year 2018 would allow the zoo to fill six positions that have remained frozen for four years.

Those positions include a director of education, three zookeepers, and two maintenance and grounds positions.

"Even though everyone puts their heart, soul and backs into it, the zoo looks tired and worn out. Landscaping is rough, (and) the keepers can barely keep up with taking care of the exhibits," Poff said in the council chambers.

The zoo's location in west Jackson is the main complaint she hears from Jacksonians, Poff said. Many people tell her that they do not feel safe in the area, which has declined in recent decades following flight of wealthier residents from the area, resulting in divestment and decay of nearby areas. The safety perceptions thus contribute to the decrease in attendance.

A few days following the budget hearing, controversy surrounding the possible relocation of the zoo circulated—some potential donors want it at the site of the old Smith-Wills stadium on Lakeland Drive near the recently named LeFleur Museum District, including the Mississippi Childrens Museum, even as others worry that would be just one more hit at a majority-black area already devastated by flight of residents and businesses.

EJ Rivers, media specialist for the Jackson Zoo, said there are no plans to move the zoo but that it cannot survive the 2018 year with the same financial status as 2017.

"We just told the City that's an option for the City. Not to necessarily move it out of Jackson but to move it to a better location, because this area has gotten so bad, and it's going to take so much to bring it up," Rivers told the Jackson Free Press this week. "And currently, this zoo as it stands, as old as it is, can't survive in that."

"We're trying to look at options as a long-term thing, and we're talking with the City because we are the Jackson Zoo," she said.

Rivers says that the City is required to provide the zoo with at least $880,000 annually, but the zoo is hoping for more. "I think our normal operating is $2.5 million, and we always ask for $1.5 to $1.2 million from the City, and last year we got $880,000," Rivers said. "It's been dropping a little every year, and right now they are in talks with the mayor and city council about what the budget's going to be for 2018."

New Ward 6 City Councilman Aaron Banks is among those who are criticizing the current zoo board of directors for holding non-public meetings, though, even as it requires City funds to survive.

"I have a problem personally (with giving) $1.5 million of our money to a board to help run the zoo, and they do not allow the public to (attend) the meetings. I think that anything that's government oriented ought to be open to the public and as transparent as can be," he told the Jackson Free Press in an interview.

But the zoo does not only rely on taxpayer funds; it also depends on sponsorships, admissions and private donors, including small ones.

"We're asking people around the metro Jackson area, whether they're members or regular donors, to donate an additional $10 this year just to kind of help out around the park with staff and animal care to make up for some of the shortfalls that we've experienced due to budget cuts," Rivers said.

The money goes into the zoo's general fund along with admissions revenue to raise funds for the end of fiscal-year 2017. The fund covers animal care such as feeding and vet bills. It also includes running the park, building maintenance. Donations are accepted online as well as in person.

"The number-one way to support the zoo is always to visit two or three times out of the year, because all of that money goes into the general fund," Rivers added.

The Zoo Party is an adults-only formal gala at The South on Thursday, Sept. 28, at 7 p.m. Admission tickets are $75, and host tickets $200. The host tickets include early entry and a bourbon and rum tasting.

The "Safari Chic"-themed event will also feature live music, a bid on real ostrich eggs decorated by local artists, and a zoo-themed auction that includes behind-the-scenes encounters with "Big Mike" the rhino and the Sumatran tigers.

Rivers emphasizes that the financial holes are due to decreasing City funds, as well as larger sponsorships and lagging attendance.

"We're doing as well as we've always done on our end with our supporters who are absolutely fabulous. The additional funding that we usually get from the general public and from the City is what has dropped off this year and caused problems," Rivers said.

Both Zoo Brew and Zoo Party are $50,000 events. Usually revenue from those fundraisers goes toward new animals or exhibits but with budget cuts in the past few years, some revenue from fundraisers has gone towards the zoo's general fund.

Rivers said the zoo has cut normal operations such as repainting and landscaping were. The zoo is currently operating, and the staff is unaffected at the time, however. Animal care is a priority and always the last thing to be considered when determining financial cuts, she said.

Poff and the Jackson Zoo Board Directors are meeting with the mayor and city council on Tuesday, Sept. 19, and Wednesday, Sept. 20, to discuss the zoo's 2018 budgetary concerns.

Corrections: This story has been updated to reflect which fiscal years budget cuts are coming from. Additionally, a previous version of this story also misstated the Zoo's fundraising numbers. Both Zoo Brew and Zoo Party are $50,000 events, not $10,000 or $30,000 events. A previous version of this story also stated general funds cover staff meetings, they do not. The Zoo Party is scheduled for Thursday, Sept. 28, not Monday the 18th. We apologize for the errors. Read more about the zoo at jacksonzoo.org. Email William Kelly III at [email protected].