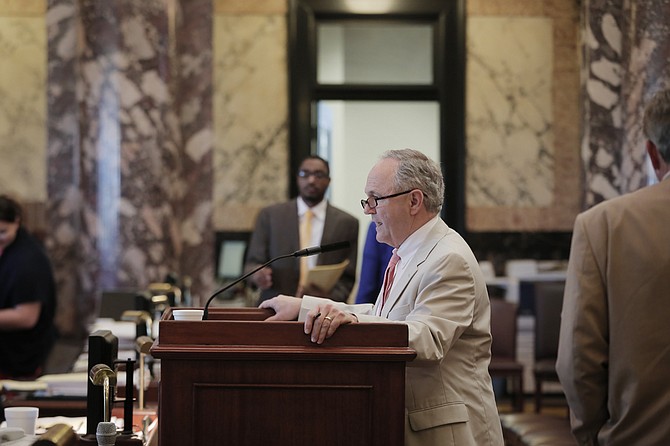 Sen. Buck Clarke, R-Hollandale, presented several budget bills Sunday evening. Both the Senate and the House must pass all budget bills by midnight on Monday. Photo by Imani Khayyam.

JACKSON — The Mississippi Legislature is deep in the midst of cutting state agency budgets this week, after Gov. Phil Bryant cut the current state budget for the fourth time in less than a year last Friday to make ends meet. Now lawmakers are voting on budgets that cut state services even deeper than those levels.

The Legislature's fiscal-year 2018 budget, which begins July 1, is $280 million less than the initial budget the Legislature passed last year before the governor started to slash even more. The reasons for slow revenue and cuts differ largely depending on one's political party.

Democrats in both the House and the Senate have entered motions and called on legislative leaders to reconsider the massive tax cut, called the Taxpayer Pay Raise Act, which has yet to hit the state's coffers. Democrats have also blamed other tax credits and tax breaks in the past six years for the state's lagging revenue.

Republicans, however, blame off-mark budget projections, made in November, and slow revenue growth for the adjustments.

Lt. Gov. Tate Reeves told reporters Friday that the Taxpayer Pay Raise Act was implemented in a responsible way, over a 10-year period.

Reeves emphasized that revenue estimates are rarely ever correct and said those estimates have been "overly optimistic" in the past couple years.

This weekend, lawmakers worked on budget bills, and even on Sunday, lawmakers had to vote to recommit several budget dummy bills that had no funds in them.

The Senate worked late Sunday to pass several budgets, and Democrats there also moved to recommit some budget bills in hopes that they might receive more funds. Sen. David Blount, D-Jackson, asked the Senate to recommit the University of Mississippi Medical Center's academic budget and find more funds for the medical center. Blount said that the "tough times" argument for the state's strapped budget was purposeful.

Blount and Sen. Hob Bryan, D-Amory, challenged Republicans to be proud of their budget cuts, since they are in line with their mission to reduce the size of government. "This is a deliberate wreckage we've brought on ourselves," Blount said. "If you ran on shrinking government, then why aren't you jumping up and down? Get excited."

Sen. Buck Clarke, R-Hollandale, who presented most of the budget on the Senate floor on Sunday, said that the $6.036 billion proposed state budget uses 99 percent of the state funds, which differs from the typical practice of setting aside 2 percent of state funds for the state's rainy-day fund.

The governor pulled more money from the state's rainy day fund on Friday to plug the current's fiscal year's budget holes. There is $240 million in the state's fund now. The House and the Senate must pass a budget by midnight Monday.

This story has been updated to reflect that the Legislature is passing a current state budget, not the governor. We apologize for any confusion. Email state reporter Arielle Dreher at [email protected] and follow her on Twitter for legislative updates @arielle_amara.