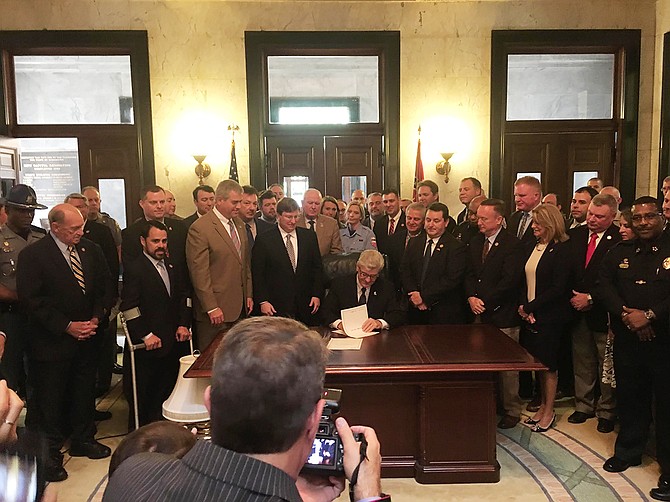 Gov. Phil Bryant signed the "Back the Badge" bill, which makes any crime against a police officer subject to the state's hate crime language. Photo by Arielle Dreher.

JACKSON — Surrounded by law enforcement officers, emergency personnel and first responders, Gov. Phil Bryant signed the "Back the Badge Act," which adds law-enforcement officials, firefighters and emergency personnel as protected classes under Mississippi's hate-crime laws. The governor also signed House Bill 1367, which will increase penalties for a person found to be intimidating, harassing or harming potential witnesses in investigations.

"After 2016, which I think we can look back on as a year in which many who wear the badge were attacked (but) for the only reason, for the fact that they got up for work and put their badge on ... and they were attacked for that, this is a small token ... on behalf of all Mississippians saying, 'Not in our state,'" Reeves said at the capitol this morning.

Both the Senate and the House passed versions of "Blue Lives Matter" legislation this session, but the Senate version, which went further in its impact, made it to the governor's desk.

The House concurred on the Senate's language by a vote of 94-18, sending the bill to the governor on March 16.

House Speaker Philip Gunn said that the Legislature was grateful to the men and women who put on the badge every day.

"Every one of us desires a neighborhood, a community where we can live in quiet peace knowing that we're protected, our children are protected, our families are protected," Gunn said. "We have in this country seen recently where there are those who would choose to do evil against these men and women simply because they are choosing to do good—they are choosing to stand in the gap and do what is right. That makes no sense, that is screwed-up thinking, that is twisted thinking for individuals who would choose to go out and attack these people."

Gov. Bryant, who worked several years as a sheriff before transitioning into politics, also signed House Bill 1367, which will increase penalties for intimidating, threatening or harming potential witnesses.

"One of the things that I remember as a law enforcement officer is having a witness who had perhaps viewed or had evidence of a crime and was being intimidated and were frightened to the point that they refused to come forward and testify ... so we today in HB 1367 are enhancing that penalty for anyone that would commit a crime of murder (of a) potential witness," Bryant said before signing the bill.

"This code section also expands (penalties for) any threatening, harassing or intimidating of a witness. This is something that will, I hope, affect the gangs because, you see, they like to intimidate witnesses, and they like to believe that they will take your life if you're going to testify against them. ... We will send the message to any gang member that seeks intimidate, threaten or take the life of a witness, we will make sure justice is done, you will be apprehended, and you will be punished for your crime."

The "Blue Lives Matter" legislation drew criticism from African American lawmakers in both the House and the Senate, saying there needed to be balancing legislation for law-enforcement officers such as body-camera bills.

Another bill addressing gang activity in the state, which could potentially amend the Mississippi Streetgang Act, will have to survive conference with six lawmakers to become law.