'Back the Badge' Bill Heads to Governor's Desk 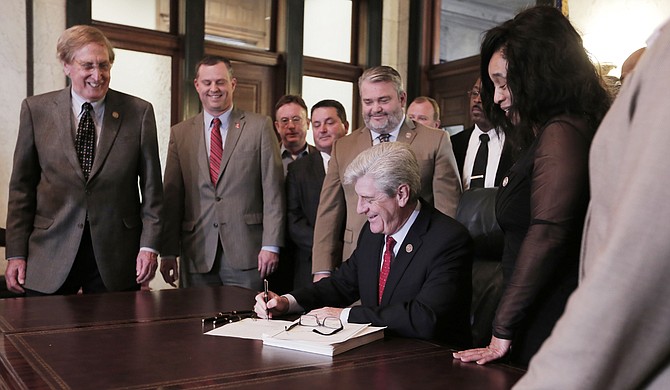 The "Back the Badge Act of 2017" heads to Gov. Phil Bryant for his signature to become law after the Mississippi House concurred on the Senate's changes on Thursday. Photo by Imani Khayyam.

JACKSON — Police officers will become a protected class for hate crimes against them if Gov. Phil Bryant signs the "Back the Badge Act of 2017," which is headed to Gov. Phil Bryant's desk after the Mississippi House of Representatives approved the Senate's version of the legislation. House Bill 645 would increase penalties for felonies or misdemeanors against law-enforcement officers, firefighters or emergency medical technicians that suspects committed "with the specific intent to target an individual or group because of actual or perceived employment."

The bill caused an outcry mainly from the Black Legislative Caucuses in both chambers this session. The House version of the bill initially focused on increasing penalties for murder, but the Senate's version is much more broad, adding law-enforcement officials as a protected class under the state's hate-crime law.

Sen. Sean Tindell, R-Gulfport, authored the Senate language, which is now in the final version of the bill. He told the Senate back in January that the legislation was in response to the deadly police shootings in Baton Rouge and Dallas in 2016, but state law-enforcement officials did not request the legislation.

African American lawmakers in both the House and the Senate have vocalized their disapproval of both "Back the Badge" bills because they lack protections for victims of police violence, mainly men of color.

Rep. Chris Bell, D-Jackson, told the House Feb. 8 about a time when he was pulled over and feared for his life. Bell told lawmakers that he had been 25 years old with no arrest record, but the officer told him to not move as he stood over him with a hand on his gun.

"That was one of the most frightening experiences of my life," Bell told the House in February.

The bill passed the House by a large margin, as it did in the Senate.

Louisiana was the only other state to have a "Blue Lives Matter" bill on the books before 2017, which adds law-enforcement officials to its protected-class law, like House Bill 645 in Mississippi does.

Amendments requiring law enforcement officers to use body cameras died, but Angela Turner-Ford, D-West Point, successfully attached language saying that nothing in the law will "abridge the freedom of speech or the freedom to peaceably assemble" protected in Mississippi state law and the U.S. Constitution.

Both Bryant and Lt. Gov. Tate Reeves vocally supported "Back the Badge" legislation this session. When the House voted to concur to the Senate's increased penalties for hate-crimes language on Thursday, Gov. Bryant tweeted "Thanks to all involved for their work on the #BacktheBadge Act of 2017. Our law enforcement officers deserve our gratitude and support."

FBI statistics show that in the last decade, 10 law enforcement officers have been feloniously killed in Mississippi.

The ACLU of Mississippi issued a statement today urging Gov. Bryant to not sign the bill.

"Not only is HB 645 unnecessary, but there is no evidence that it will make police safer. Passing this bill, in conjunction with the legislature’s failure to pass any meaningful police reform legislation, antagonizes the already volatile state of police-community relations," the statement says. "Whether the bill is labeled 'Back the Badge' or 'Blue Lives Matter,' the legislature’s intent to counter the message of Black Lives Matter cannot be clearer."