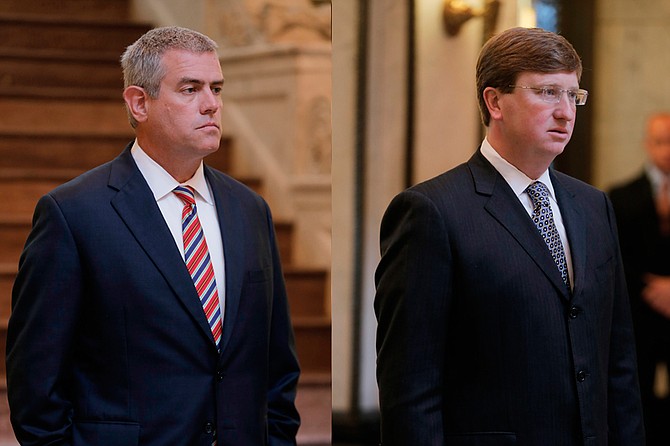 House Speaker Philip Gunn (left) and Lt. Gov. Tate Reeves (right) are controlling the development of a new education funding formula, largely behind closed doors. Low-income students have the most to lose. Photo by Imani Khayyam.

JACKSON — Mississippi's new education funding formula is in the hands of a few lawmakers and the statehouse leadership—and what it will look like or how much money will go into the formula are still a mystery to the public and the press. Since the New Jersey-based nonprofit EdBuild released its recommendations on Jan. 17, few people have been privy to the simulator that will spit out a new formula, based on lawmakers' priorities, called "weights."

While school districts and associations were able to give input initially, now the fate of the Mississippi Adequate Education Program is in the hands of a few top lawmakers in the capitol. Top officials have said that when they are ready, they will reveal the new formula in a special session or by suspending the rules and bringing up legislation before the Legislature adjourns April 1. Regardless, school funding for the upcoming school year depends on some sort of legislative action before lawmakers go home after the session.

Except for one hearing last winter and the opportunity to submit public comments, the public has not been privy to the process, while other stakeholders such as educational associations around the state have given input at some point.

Several public comments from last winter, published on the Legislature's website, center around equity and ensuring that low wealth districts have access to funding similar to that of high-wealth districts.

"Funding should be more equitable—students in high-poverty districts should have comparable resources as students in more affluent districts," one email says.

More than 74 percent of children who attend public schools in Mississippi qualified for and received free or reduced lunch in the 2015-2016 school year. Mississippi allocates an additional $268 for each of those students, considered "at risk" in the MAEP formula.

EdBuild says in its January report that $268, which is about 5 percent of the base student cost, is low and "may not even be sufficient to cover the difference between the cost of a school lunch and the USDA reimbursement (for free and reduced lunches), much less supports in the classroom and school like interventionists, counselors and reduced student-to-teacher ratios." EdBuild recommends that the Legislature allocate 25 percent additional funds above the new base student cost for each low-income student.

Most states use free and reduced lunch numbers to determine who is considered low-income for funding formula purposes. A USDA provision called community eligibility can conflate numbers, allowing districts with 40 percent of their students who qualify for free and reduced lunch to serve free meals to all their students. This provision can potentially include kids who aren't low-income in its count.

To fix this, EdBuild suggests Mississippi not use free and reduced lunch data to determine which students are "low-income," but instead use Census data. This is likely to lower the number of students considered "at-risk," for formula purposes.

Michael Griffith, a policy analyst at the Education Commission of the States who studies the at-risk component of several school-funding formulas, says states that use free and reduced lunch to determine at-risk students typically identify a higher number of people.

"Usually what happens is if a state does free-and-reduced-price lunch, the number of students that you will identify will be higher than if you look at just government assistance programs," he said in an interview. "You have to make significantly less as a family to qualify for TANF and some of these other programs than you do for free and reduced lunch, same if you're looking at poverty; it depends on what number you're looking at in the Census data."

If the Legislature chooses to take both of EdBuild's low-income recommendations to heart, it could significantly increase funding for at-risk students, while potentially shrinking the pool of students considered at-risk in the first place. EdBuild recommends setting the at-risk threshold at the U.S. Census Bureau estimates of district school-aged poverty rates, which are updated annually. If the Legislature chooses to use the federal poverty level, a student who comes from a family of four that makes $24,300 could qualify as "low-income," but children from a family of four that makes, say, $25,000 annually, would not be considered low-income. Lt. Gov. Tate Reeves told reporters this month that he was looking at both changing the definition of a low-income student as well as increasing the weight for those students.

Some school-finance officers are also concerned about EdBuild's recommendation to change the 27-percent rule, put in place back when the state adopted MAEP back in the 1990s. The 27-percent rule, which safeguards districts from paying more than 27 percent of the cost of public education, keeps the state on the hook for the majority of school funding—something authors of MAEP say was intentional.

"One of the things we wanted to do ... was help take the pressure off the ad-valorem taxpayers. One of the reasons we had the cap and the 28-mill contribution (rule) is ... protection for ad-valorem taxpayers so that taxes on their farms, homes and cars did not go up," Sen. Hob Bryan, D-Amory, said in January at a public hearing he held about possible formula changes.

The EdBuild recommendations suggest that the state eliminate the 27-percent rule that diverts almost $120 million, its report says, "to districts that could otherwise generate more funding from local sources to support their schools if expected to contribute at the same tax rate as the rest of the state."   Simultaneously, the New Jersey nonprofit suggests lifting the 55-mill cap for districts, enabling them to levy more local taxes to support their local schools. Mississippi school districts receive 50 percent of their funds from the state, around 34 percent of funding from local sources and 14 percent from federal funds.

These two suggestions have school-finance officers concerned because depending on what kind of school district you're in, either one of those recommendations could have a large impact on a district's funds. Well-off districts that want to raise more funds from the local tax revenue could levy more than 55 mills under EdBuild's suggestions, but almost all districts would shout about losing the 27-percent rule, forcing them to leverage more local tax revenue.

The Mississippi Association of School Business Officers, or MASBO, is composed mainly of school-finance officers whose jobs it is to understand MAEP and tell their district administrations how much money they need to levy.

Sheryle Coaker, the executive director of MASBO, says her organization cannot fully support all of the recommendations because not all member districts will receive more funds, depending on what lawmakers choose to change.

"At this point, there are still concerns about the reduction of state funding with the 27 percent (rule) with 28 mills ... as MASBO it's hard to tell you that we can fully support any of it because we know there are going to be some districts that are going to hurt or take a hit locally that really don't need to," Coaker said.

Representatives thus far have expressed distaste for changing the 27-percent rule. Lt. Gov. Reeves told reporters there were "ongoing discussions" regarding the rule.

EdBuild recommends that change, too. Average daily membership, which counts school attendance several times in a school year (instead of once), will give a more accurate picture of a district's student body—and ultimately account for more students in a district, meaning more dollars. For Jackson Public Schools, and likely most districts, changing the formula to count membership would mean a boost in funds.

JPS Chief Financial Officer Sharolyn Miller told the JPS board at its Feb. 21 meeting that JPS would see an increase in funding if the Legislature changed MAEP to membership. Miller also addressed the waiting game for the new proposal.

"We're kind of in the blind, I met with MDE officials on Friday, they have actually not been even asked to provide input to the legislators," Miller told the JPS school board. "So they're doing this all on their own not using information from MDE, so we're all kind of at a loss."

MDE confirmed that it is not working with lawmakers behind closed doors, using the simulator that EdBuild created.

There is an important distinction between MAEP and what EdBuild recommended. EdBuild's recommendation is not a full study, while MAEP was developed to be used as a whole, Michael Griffith said.

"The way EdBuild wrote their study is different than other studies; they sort of wrote it like ... a tapas menu," he said.

With menu in hand, lawmakers will pick and choose what best fits their goals for education, but those goals go much deeper than that, as Griffith explains.

"Some people say that the expectation is as long as kids come out of schools and read and do basic math, that's enough. Well, that doesn't cost that much. ... There are others that feel that they want educate kids to get to college: that cost is much higher, so it depends on your educational expectations, and that depends on how much money you put into the system."