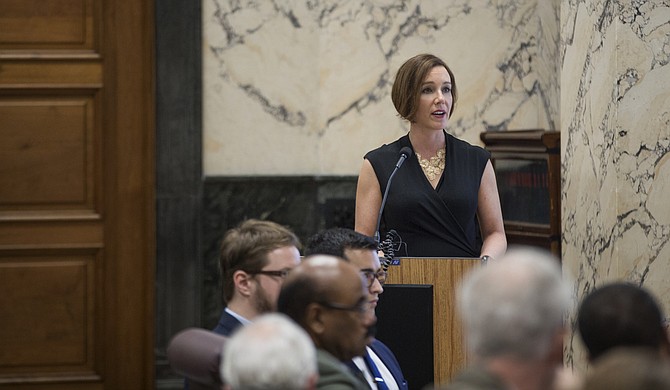 JACKSON — After a few quick months of touring around Mississippi, speaking with lawmakers, administrators, teachers and students, EdBuild released its 80-page recommendations report to Mississippi lawmakers, suggesting the state move to a weighted, student-centered school-funding formula.

Weighted student funding focuses on a student's specific needs and allocates additional dollars based on those needs. The EdBuild proposal would focus student funding on all student population needs including "low-income," special education, vocational and gifted students. Additionally, the New Jersey-based nonprofit, which works with states on school-funding systems, recommended that the Legislature add weights to its formula to include more funding for English Language Learners, by grade-level needs and for students who live in rural areas.

Rebecca Sibilia, the CEO of EdBuild, said a weighted student formula will allow school districts to predict more accurately how much money they will receive each year.

"(Weighted formulas) promote fairness and efficiency. A weighted student formula will identify priority students and provide additional funds, as noted in the form of weights," Sibilia told lawmakers on Jan. 16. "What's most important is that it divorces funding policy from spending."

Administrators, Sibilia's staff found, were frustrated with the way the State counts attendance for its education formula currently, which is twice a year. Instead, the State should count enrollment numbers several times throughout the year to get a more accurate picture of how many students its needs to be allocating funds to, she said.

A large part of EdBuild's recommendations center on how much the State funds its public schools compared to other states. 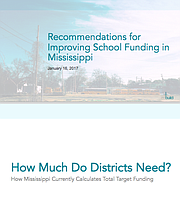 "Mississippi provides a higher proportion of funds and more absolute funding per student from state funds than nearly all its southeastern peers," the EdBuild report says.

To counter this, districts might have to pick up a greater share of funding their schools. Sibilia told lawmakers they should look at changing their "27% Rule," which essentially requires the State to provide at least 73 percent of the total amount needed to fund each district, the EdBuild report shows.

Sibilia said the rule redirects more than $119 million to districts—EdBuild suggests should go toward the student base cost instead. Additionally, funding for the state's add-on programs, which are currently outside the Mississippi Adequate Education Program formula, would need to be rolled into the new formula, mainly as weights. The reality of a new formula based on weights is that some districts would have more to gain, while other would lose some state funds.

EdBuild's suggestions are just recommendations. Lawmakers can choose whether to implement any of the suggested reforms, and even things like changing the definition of "low-income" will affect how the new formula determines weights. EdBuild's recommendations all work together on district and state levels, and Sibilia told lawmakers the new formula would take at five to eight years to establish.

"[D]on't do it immediately because that will result in real harm to students," she warned.

Monday was the deadline for filing bills for the 2017 legislative session, and so far, House members have filed several bills that appear to bring forward the MAEP formula, as well as implementation of several of EdBuild's recommendations.