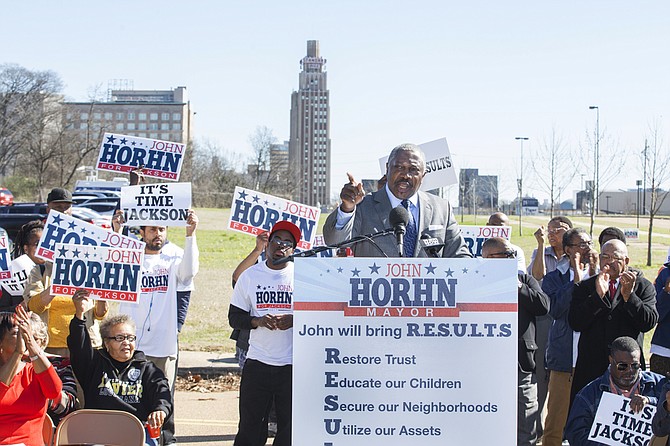 JACKSON — Sen. John Horhn, D-Jackson, publicly placed his hat in the ring, once again, for mayor of the City of Jackson, turning widespread rumors into reality.

"As mayor of Jackson in the first 100 days, we are going to set the wheels in motion to get results for you, the citizens of Jackson," Horhn said. "We will restore trust in city hall. We will educate our children. We will secure our neighborhoods. We will use our assets wisely. We will leverage more resources and opportunities. We will take care of infrastructure immediately. We will strengthen our capital city."

Horhn, who has represented Jackson in the Mississippi Capitol since 1993, said he wants to concentrate on transparency, promising an audit of the city's financials.

He promised to shore up the city's financial difficulties, even going so far as to advocating for recalling the furlough of city employees.

Horhn said that the safety of the neighborhoods in Jackson was the number-one issue for the city.

"The safety of our neighborhoods is the most important things we can do for the city of Jackson," Horhn said. "Citizens of Jackson have great concern about the murders and the shootings, the robberies and the crimes against property going on in our community."

Horhn said that he would implement the findings in the "Capital City Crime Prevention Plan," funded through legislative action he helped pass. "And immediately draw down tens of millions of dollars for innovative programs, equipment and technology from the Violence Reduction Network from the U.S. Department of Justice," Horhn said. Jackson was added to the national network that uses federal resources from crime prevention last fall.

Horhn, whose name is connected with several new bills introduced this session to relieve Jackson's infrastructure burden, said his role as Jackson mayor would be simple: to find the funding and bring it back. He called the 1-percent sales tax a "missed opportunity" but said that he was heading to Washington, D.C., the next day, to advocate for Jackson.

"And as your next mayor, we are going to go get the money!" Horhn promised.