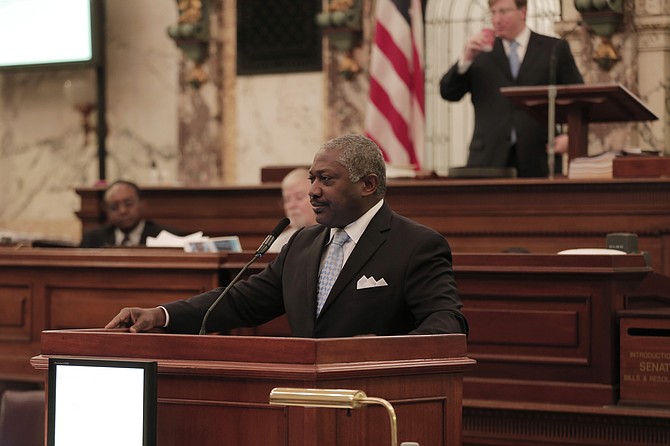 Sen. John Horhn, D-Jackson, said that the Legislature wanted "too much for too little" with its changes to the Capitol Complex bill during conference this week. Photo by Imani Khayyam.

JACKSON — Jackson has lost more than it has gained this legislative session, as the Capitol Complex Improvement District bill died yesterday. Its death ensured that the capital city will not receive the benefit of deferred sales-tax dollars to renovate the infrastructure in the heart of the city, even as the Legislature voted to take over control of the city's airport.

"The Capitol Complex Improvement District bill," Mayor Tony Yarber said in a statement sent out the day the bill died, "in its original form, would have been integral to City efforts to structure a sound finance plan to guarantee a strong infrastructure system for Mississippi's capital city."

But by the time the bill made it through a House and Senate conference, it contained a poison pill that even soured the Jackson delegation on taking the funds.

"The bill that came out of committee actually created a judicial district in that Capitol Complex for the sole purpose of dealing with criminal matters," Lt. Gov. Tate Reeves told reporters this morning. "I don't think you have to be a genius to determine that there are real challenges in the criminal-justice system in Hinds County."

Reeves said that in order to address infrastructure problems in the capital, crime needed to be addressed. "To make that a justified investment by the state, we must help fix the crime problem in the entire city and the entire county, and I think one way to do that is to lessen the burden on the current criminal-justice system," Reeves said.

Jackson City Council President Melvin Priester Jr. expressed his surprise at that last-minute addition to the bill on his Facebook page yesterday before the Senate left and the bill died: "Then we wake up this morning to no dedicated funding, expanded jurisdiction for the Capitol Police (which happens regardless of funding) and a separate, un-elected judge for this one part of Jackson (assuming this thing ever gets funded)."

In its original form, House Bill 1564 would have created the Capitol Complex Improvement District, funded by a percentage of the sales-tax revenue from the City of Jackson now sent to the state, redirect that money under the authority of an appointed commission to infrastructure improvements, and essentially save the City millions of dollars to repair the area near state buildings.

HB 1564 originally passed the House; then the Senate made changes and returned it to the other chamber. The House declined to concur, and the bill went to conference to discuss changes. During those meetings, lawmakers pulled the funding for the bill, and created a special judicial district within the capital. Ultimately, the Senate declined to support it, ending its session without confirming the bill, effectively killing all chances the bill has of making to the governor's desk to be signed into law.

The District itself would have stretched from Jackson State University, through the downtown area, then move north through Belhaven all the way up to LeFleur's Bluff State Park. In the past months, state and local elected officials have touted the bill as a way to use the City's limited funds to address infrastructure issues in the outlying areas.

"We're grateful to our Hinds County delegation who boldly came together, saw the vision of Jackson to be a better capital city, and crafted a piece of legislation that spoke to lawmakers from other parts of the state who also recognized the need to invest in the City of Jackson's degrading infrastructure," Yarber said in the statement. "Unfortunately, the majority of the House and Senate did not share this vision and chose to turn their backs to a proposal that was an investment in the future of not only Jackson, but the State of Mississippi."

"What's clear to me is that we have a Legislature that just doesn't believe in democratic self-representation regardless of race and gender. And so in light of that fact, we are going to have to work harder to develop partnerships with the state, and work harder to right the ship of Jackson without any expectation of help from the state or surrounding communities."

Members of the Hinds County Senate delegation were also disappointed that the bill died.

"Well, it is unfortunate that the bill died," Sen. John Horhn, D-Jackson, said by phone shortly after the Senate closed its session on April 20. "But it had changed so much from how it was originally drafted and introduced, and it's a situation where the Legislature wanted too much for little and was willing to give too little for too much."

"We have no choice but to try again next year," Horhn said, elaborating on the burden that the state places upon the capital. "We don't have the benefits of being the state capital now that we once had, and I think it's incumbent upon the state to help close the gap in this fund deficit to be able to make sure that the capital city remains vibrant and productive."

Other members of the delegation agree that the changes were too much.

Lt. Gov. Tate Reeves said he hopes to continue the conversation with city leaders, lawmakers from Hinds County and other legislators throughout the state, acknowledging that geographical concerns needed to be addressed for lawmakers who aren't from Jackson.

"But if we're going to do it, we need to do it in a way that is responsible for the taxpayers and in a way that actually makes a difference long term. We're not going to write a blank check—that's never going to happen."

Priester wrote on his Facebook page that the Legislature overstepped, even as he agrees that not everything he being run well in Jackson.

"You can't get around the fact that Republican legislators made last-minute changes to the Capitol Complex bill because they're afraid of Jacksonians and who Jacksonians elect/appoint to fill roles as varied as Mayor, Judge, City Councilperson, Police Chief, Public Works Director, etc.," Priester wrote.

"Frankly, based on how we've handled matters such as the Siemens contract, I can't say they are entirely unjustified. Ironically, however, the changes the legislators made and the manner those changes were made (in the middle of the night on the last night of the session) stiffed the moderate and younger leaders in the City who are trying to turn this city around."