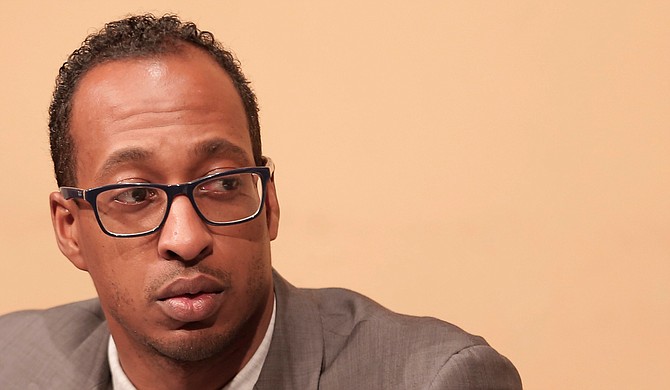 Council President Melvin Priester Jr., along with other council members, wants to look at the water-sewer revenue out in the open.

JACKSON — The City of Jackson is almost 12 percent behind projected revenue for water and sewer for this fiscal year, and the administration is considering potential litigation involving one of the vendors, it said Monday.

Deputy Director of Administration Michelle Day presented a detailed account of the water, sewer and sanitation fund to the Jackson City Council at its April 4 Budget Committee meeting.

Day pointed to a detailed list of accounts receivable for the water-sewer fund, which is $6.9 million, or 33 percent, short of where it should be at this point in the financial year. Day said that this shortfall will continue unless steps are taken.

“And if we continue to collect at this rate, that number will grow as we get to the end of the year if we don’t make some changes,” Day said.

Day explained both in person and in a April 4, 2016, memo to Mayor Tony Yarber that the report given to the council was derived from data acquired from the city’s financial system, the Water Sewer Business Administration (that handles billing), and Siemens, the project contractor for the metering and billing upgrades that have taken place over the last year.

“The challenge that we have had is from the water billing administration, when those collections are uploaded to our financial system,” Day said.

“It deposits those revenues into one cash account. So all of our solid waste and water-sewer collections up to this point have been one pot of money.”

“So what we have had to do as a department is go back and reconcile that information,” Day explained. This reconciliation is manual and takes some time, she said.

Day also mentioned in her memo that “although we have performed a significant amount of analysis of the data included in this report, it should be noted that data uploaded from October through January has not been completely verified and will require manual adjustments.”

Siemens and the City

Mayor Yarber made it clear Monday that he wanted the committee to enter into an executive session to discuss a “potential legal matter” involving the revenue data that would be discussed. He asked the city attorney, Monica Joiner, to address the committee, and she said that the litigation under discussion was “related to a specific vendor.” Neither mentioned Siemens or any other vendor specifically.

“Alignment of account numbers used for the interface between the City of Jackson’s new billing system and its general accounting system caused initial challenges in identifying revenue,” Siemens representative Amanda Naiman said in an email to the Jackson Free Press on April 5, responding to a phone call. “Siemens assigned an accounting employee to work with the City’s accounting department, and the issue has since been resolved.”

Budget Committee Chairman De’Keither Stamps, of Ward 4, attempted to enter the documents passed out, including a copy of the revenue spreadsheets, into the “confidential file.” Ward 7 Councilwoman Margaret Barrett-Simon stopped him, pointing out that the committee had not yet decided to enter into executive session.

“I’m uncomfortable with going into executive session at this time, and I think that the people of the city need to know where we are financially, particularly with the numbers,” Priester said. “I think we at least have the obligation to go through what our revenue and expenses numbers are and how they stand publicly.”

Yarber held his ground on the need for the executive session.

“There is a reason why we are talking about a difference between $20 million collected and what should have been collected at $33 million,” Yarber said. “We don’t have any problem with talking about the revenue or the collection or any of that out loud.”

“But,” Yarber added, “what I don’t want to have happen is for us to speak too much about why the numbers are the way they are and potentially give away legal strategy if there is to be some legal action."

In her memo to the mayor, Day addressed the source of the discrepancy.

“In my opinion,” the document states, “the negative impact of the installation of the new water meters combined with the implementation of the water billing system have hindered our collections by approximately $13 (million).” She broke that total down into $9 million lost through meter malfunction and $4 million through “inadequate system integration.”

Siemens was the company the City contracted to handle both the meter installation and integration of a new billing system, although they hired subcontractors to carry out some of the work.

The problem is that the City is locked into a contract that might prove difficult, as the mayor pointed out at a town hall-style meeting he held at Christ United Methodist on March 29. People in the audience had asked him about the issues with billing, and some had even yelled “fire them!” from the back of the room.

“The real issue is, and I heard somebody say ‘fire them,’ the problem with firing right now, is that we are almost $90 million in the hole with a bond. And to fire Siemens now, we are left carrying the bag.”

‘Working to Clean That Up’

But the problem may go beyond Siemens and the new billing system. On March 31, Chief Administrative Officer Gus McCoy sent a memo to the city council in which he listed the reasons that the City of Jackson was unable to file its audit for last year. It was not clear from the letter exactly which firm was assisting the City with the audit.

However, the letter did state that “with respect to water and sewer revenues” the audit firm was “unable to verify the accounts receivable balance.” As Day mentioned to the Budget Committee, “deposits for water, sewer and sanitation revenues must be segregated in the accounting system in order that they may be properly posted.” Lastly, the audit firm was “unable to reconcile deposits as reported by our system vs. bank statements.”

As a result of these findings, McCoy stated in the memo that the administration “is in the process of reconciling the accounts receivable balances.” Siemens, for its part, will be sending a “dedicated employee to the City in order to assist in segregating the deposits for water, sewer and sanitation revenues.”

The City stated that it would also “be able to file the audit in a timely manner with the Office of the State.”

Council President Priester said Tuesday that he was still looking through the numbers as he is given them from the administration.

“What’s really causing the situation?” Priester said during an April 5 phone interview. “Let’s hammer out what the numbers really are. I don’t have confidence as we sit here on April 5, 2016, that we have truly reconciled our numbers from last fiscal year or through the last five months of this year.”

Priester continued: “I can’t tell you how good or bad because the numbers have not been packaged in the most user-friendly manner. What I am still doing is piecing together the numbers, and we are still working to clean that up.”

“I am still just trying to make all the numbers line up.”

The Yarber administration could not be reached for further comment before press time Tuesday.