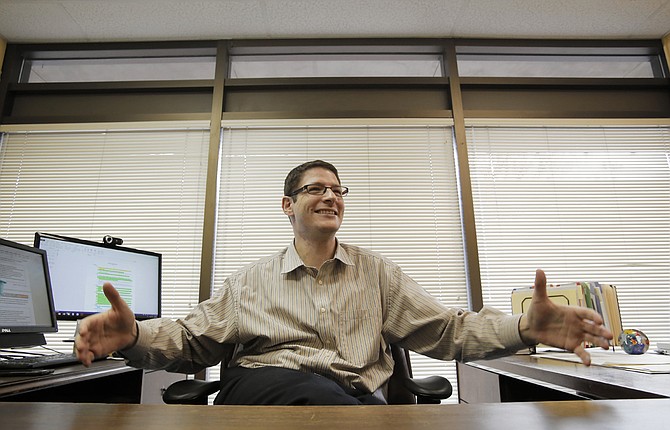 JACKSON — Early one morning at Whitten Preparatory Middle School, students yawned and fidgeted in their stiff, wooden seats, clutching their hoodies and jackets. It was National Day Against Gun Violence, and the students had already sat through an assembly in the auditorium earlier that week on the same topic.

That morning, they listened as someone read a pledge they were supposed to echo: "I will never use a gun to settle a personal problem or dispute. I will use my influence with friends to keep them from using guns to settle disputes."

The school's push to talk about gun violence comes at a time when research shows overall steadily decreasing gun-violence rates, but an uncomfortably high rate for young black men, who are the most victimized by it. Gun violence inordinately affects adolescents of color, especially black males, at 94.1 deaths per 100,000 population, according to the Centers for Disease Control.

Nationwide, homicide is the leading cause of death for black males aged 15 to 19.

Violence accounts for the lowest number of school-discipline referrals in Jackson Public Schools. Still, a 2015 Capital City Crime report found that "defiance" and "non-compliance" are common complaints from teachers and, if unchecked, can escalate into more serious conflicts, like fighting.

Whitten Preparatory, a mostly black middle school, is one of four schools in Jackson that are trying to combat disciplinary issues and keep violence low by using peer mediation. The school began participating in a peer-mediation program called Talk About the Problems, or T.A.P., which in partnership with the Jackson-based Goldring/Woldenburg Institute of Southern Jewish Life, trains students to be mediators so they can help their classmates come to a peaceful resolution to their issues.

The T.A.P. program recruits and trains students to be mediators and de-escalate conflicts, like gossiping or misunderstandings.

Twenty-year-old Cargin Madison helped spearhead the T.A.P. program when he was a seventh grader at Blackburn Middle School in west Jackson, where the program started in 2009. Madison says he was excited when the institute took the T.A.P. approach to more schools.

"When I heard here was going to be a program in my school where I heard the students could mediate between students and there's no adult involvement that really (made me think) 'now we can solve our own problems in a peaceful way,'" Madison said.

He says the perception of JPS students not being able to resolve conflict peacefully depends on the student, and that T.A.P. works best when both parties are on board for mediation.

Despite skepticism, more students participated in T.A.P. at Blackburn when they saw how it helped their friends, Madison said.

It especially helped people who might not want to fight, just conditioned that way as a defense mechanism, he added. Madison grew up in west Jackson, an area stereotyped as particularly rough in an already-impoverished city, where some of his peers had to deal with trauma on a day-to-day basis, in addition to going to school.

"That's why it was so easy for them to resort to arguing or causing a disruption in class," he said. "Some of them reacted off of instinct, but they knew deep down inside there was an alternate way. So it helped tap into that alternate method of reinforcing positive behavior."

Experts say peer mediation can "substantially change how students approach and settle conflicts." A 2000 article titled "Creating School Climates That Prevent School Violence" reports that students involved in peer mediation were more likely to find a satisfactory resolution to their conflicts, and feel that their interests had been served.

In one middle school highlighted in the article, 83 percent of students trained in peer mediation reported "win-win" settlements, while 86 percent of untrained controls reported that conflicts resulted in a "win-lose" outcome.

Peer mediation can do more than just solve conflicts. Data show that peer-meditation programs, when implemented with fidelity, can help interrupt the school-to-prison pipeline.

For the Goldring/Woldenburg Institute of Southern Jewish Life, the T.A.P. program is a way of giving back to the community. Dave Miller, director of community engagement, uses the Hebrew phrase "tikkun olam" when he speaks about the importance of community involvement. "It means to repair the world," he told the Jackson Free Press in an interview. "Not in a way that we felt the community had a problem that we needed to fix. But we met with community members and stakeholders and asked what they wanted, and we worked to fulfill that need."

From there, the mediation program was born. The institute began the T.A.P. program in 2009 under direction of Malkie Schwartz, prior community engagement director and a lawyer trained in mediation skills. Blackburn Middle School spearheaded the process. Students go to structured peer-mediation training, where they learn to be neutral and keep their peers' business confidential.

After they complete training, students graduate from T.A.P., and a judge swears them in as mediators. From there, their classmates can request mediation for what Miller calls "low-level" conflicts, like gossiping or misunderstandings. Mediation is completely student-facilitated, though counselors are within earshot and within view; students generally feel better able to open up this way, Miller said.

Miller said that the rate of attrition in JPS of school leadership makes it hard to track how T.A.P. specifically impacts suspension rates. But, he says, anecdotes from students, faculty and staff reveal a positive reaction to the program, which has expanded past Mississippi into other states. JPS says T.A.P. "enhances child and family security by making schools safer for students" and that the program furthers the district's goals to support positive behavior interventions with its PBIS system as well.

Madison says T.A.P. not only looks good on his resume—he is a certified mediator—but also that it helps him in his day-to-day life.

"I learned how to have an adult conversation at an early age because of T.A.P. mediation. I don't run to guns or in someone's face. I know how to talk about my feelings," he told the Jackson Free Press.

One of the most important impacts, Madison says, is that mediation centers on the fact that the students who do it are just people. And people can change and grow.

"People put us all in a group and put a big rubber band around us and say we're all going to be like this, but there is room to rise," he said. "Our starting place is not always going to be our finishing place. Just because I start off shaky doesn't mean I'm not going to finish strong. ... They might have built a prison bed off of me. But I'm standing here to say you funded that prison bed for nothing. You could've put that money toward my education," he said.

Sierra Mannie is an education reporting fellow with the Jackson Free Press and The Hechinger Report. Email [email protected]