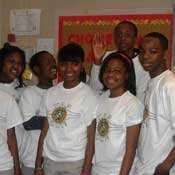 Students at Blackburn Middle School are learning to use peer mediation to settle disputes that previously would have ended in fights.

Hakeem and Matthew have been fighting. Seated in a classroom at Blackburn Middle School, the two eighth-grade boys explain the origins of their conflict, an ever-escalating series of slights.

After an exchange of mean comments in the hallway, Hakeem bumped into Anthony in the lunchroom, and Anthony retaliated with profanity.

The two scowling boys aren't explaining their problems to a teacher, however. Instead, the two have sought help with Blackburn's peer-mediation program. Two of their schoolmates, Carjin and Erika, offer to help the two reach a resolution that satisfies them both in the soothing tones of a guidance counselor.

If the scene seems artificial and the young people unbelievably mature, that's because it is fake. In reality, all four students are peer mediators. They perform this role-play in a promotional video for Blackburn's new peer-mediation program, TAP Out. (TAP is an acronym for Talk About the Problems)

Since November, Blackburn students with discipline referrals for conflicts with other students have had the option of requesting a referral to TAP instead of taking the traditional consequence for their misbehavior such as detention or suspension. At the end of the confidential session with two peer mediators, the participants sign an agreement committing to certain actions to resolve their conflict.

"Too often we have children who have conflicts—at this age, they just do," Blackburn principal Marietta Carter said.

"They often don't know how to resolve these conflicts in a peaceful way. (TAP mediators) are actually doing what I used to have to do (as an assistant principal): Bring children in and give them an opportunity to hear each other's side. That's all it takes usually, and the problems are resolved."

The impetus for TAP came from Bridget Harkins, a veteran teacher at Blackburn who teaches the "Open Doors" gifted classes for the sixth through eighth grades.

"The children in this age group have a hard time dealing with their problems," Harkins said. "For the most part, it's usually a physical response to the problem. We had lots of fights, and children were being suspended and having to spend three days at home. I thought, 'This is ridiculous. I know these children. If they're given an opportunity to learn a different way to solve their problems, it will really work.'"

Last school year, Harkins enlisted the help of Malkie Schwartz, director of community engagement for the Goldring-Woldenburg Institute of Southern Jewish Life, to establish a mediation program. Schwartz, then a law student at Mississippi College, leapt at the chance to involve her organization in the greater Jackson community.

Schwartz signed up for a conflict-resolution class and researched other mediation curricula. Harkins, the program's coordinator, selected an initial group of 24 students to participate in a training that Schwartz led. Then, the students selected 10 out of their group to serve as the school's first cohort of mediators.

They named their program TAP, in part because of the wrestling connotations of "tapping out" to signal submission.

TAP mediators have handled 11 cases since November, and teachers have already noticed an improvement.

"I've spoken with some of the teachers, and they feel like the program has been beneficial," Carter said. "As we grow, and as this program becomes a part of our culture, I know we'll see a real significant difference."

Conflicts between students who have gone through mediation have not recurred, though individuals may still find conflicts with new peers, Harkins said.

Participants and mediators have been "brave," Schwartz says, to seek an alternative to the violent responses that tend to be the norm in middle school.

"It's taken a little while to have the kids buy into it as a cool thing to do, because in middle school they think it's cool to be able to beat so
mebody up sometimes," Harkins said. "In the climate of our school, it's been a godsend for some of these children who really wanted another way to work out their problems ... . This gave them an opportunity to find another way."