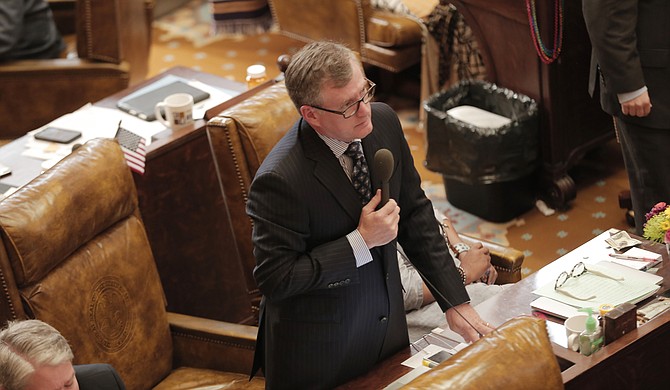 Rep. Jay Hughes, D-Oxford, spoke to members of various Mississippi Baptist conventions at a public hearing at the Capitol on Nov. 17 about the importance of the state's school-funding formula. File Photo. Photo by Imani Khayyam.

JACKSON — Members of several Mississippi Baptist conventions along with members of the Legislative Black Caucus hosted a public hearing at the Capitol on Nov. 17 to discuss education, infrastructure and health care.

Rep. Jay Hughes, D-Oxford, decried the idea that the Mississippi Adequate Education Program was antiquated and did not work, especially because the state has only fully funded it twice since its creation almost 20 years ago.

"We can't declare MAEP a failure when it's only been done once, and it worked," Hughes said.

House Speaker Philip Gunn and Lt. Gov. Tate Reeves, both Republicans, announced their contract with the New Jersey-based nonprofit, EdBuild, to help examine the MAEP formula this summer. The second public meeting with EdBuild is this afternoon at 4 p.m.

Hughes expressed frustration with these meetings with EdBuild, pointing out that the nonprofit is only two years old and likely does not know about education in Mississippi. "My position is we should fund MAEP fully for a few years before we abandon it," he said.

Gunn, Reeves and Gov. Phil Bryant have all expressed frustration with the formula in recent months. In Bryant's fiscal-year 2018 budget recommendations, which were released this week, he recommends an increase in spending of $16.4 million "for the hopefully newly designed, evidence-based school funding formula."

"We must ensure that every child has a quality educational opportunity," Bryant's budget recommendation says. "Indiscriminately throwing more than $2 billion dollars (sic) at K-12 on the basis of an arbitrary, antiquated formula year after year is unfair to taxpayers."

Hughes pointed to the recent school rankings as an example of why increased funding is so important. Most of the failing school districts are majority-black school districts, he said. He said the vulnerable and failing districts in the state deserve more financial support and the full funding of MAEP, while acknowledging that Bryant's suggestion to add $16.4 million is an improvement.

"It costs more money and (takes) more resources to educate a poor and at-risk child," he said.

Other speakers at the hearing addressed infrastructure and health-care needs. Allen Burks, a former supervisor in Claiborne County, said leaders can improve infrastructure without increasing sales taxes or gas taxes. Both of those taxes, he said, will take more income out of households.

Burks said the tax credits the state is giving to corporations, like the Mississippi Taxpayer Pay Raise Act passed last session, do not mean more money in households across the state.

"Those that can't afford it the most get taxed," Burks said.

"I'm hoping that Medicaid is something the Legislature addresses this session," Truly said. "It's a matter of business."

The Legislature could change parts of the Affordable Care Act and Medicaid in coming sessions, depending on what a Donald Trump administration and the Republican-led Congress chooses to do with Obamacare.

Lawmakers from the Legislative Black Caucus handed out sample resolutions for pastors and community members to take back to their communities and get Mississippians to sign and bring back to the Legislature for the 2017 session. The resolutions are to keep the MAEP formula as it is and fully fund it, to repeal the Taxpayer Pay Raise Act, and to increase the enrollment and matriculation rates of black physicians at the University of Mississippi Medical Center.