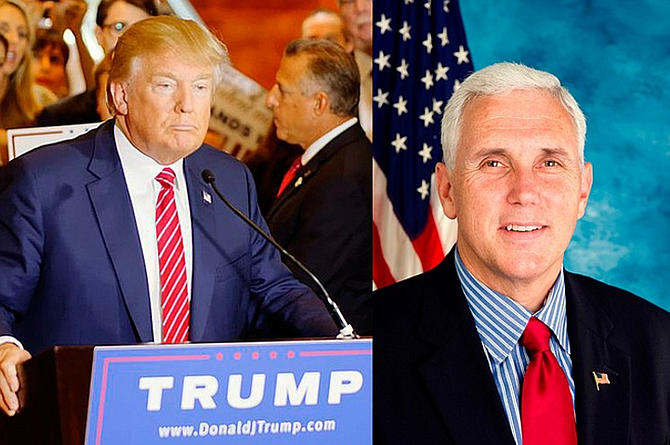 Donald Trump (left) and Mike Pence (right) are targeting the rights of women in the 2016 election. They vow to stack the courts with anti-abortion justices who could make Personhood a reality—endangering in vitro fertilization, the birth-control bill and any abortion to save the life of the mother. File photos

My favorite night ever in my home state of Mississippi came in 2011 when women of all political stripes worked together to say no to the powerful Personhood political movement. It was comprised of political forces who wanted to endanger our health, limit our rights, and take over every health-care decision from whether we can use birth-control pills or in vitro fertilization, to the legality of a woman (or her family) choosing an abortion rather than dying, leaving loved ones behind and her other children without a mother.

Few people thought Mississippi would vote down Personhood, but we did 59 to 41 percent. This happened because women here saw what was really at stake, and how it transcended politics. Yes, Gov. Phil Bryant was the Personhood co-chair; yes, many women who voted against Personhood also abhor abortion; yes, as one of the supposedly most conservative states, the country would never believe we would say no to the initiative. But we did.

In many ways, Personhood is back on the ballot tomorrow, and in a more dramatic way than it was here back in 2011. Donald Trump has the full backing of the very same forces that brought us Personhood and, thus, has promised them the moon, even as he often changes his stated view on abortion from outlawing except for rape, incest or to save the life of the mother. He said in an MSNBC town-hall meeting that women would be treated as criminals for choosing the procedure. “The answer is ... that there has to be some form of punishment,” Trump said.

Meantime, Trump’s running mate Mike Pence supports the full lock-and-load Personhood approach—from no hormonal birth control (they call the pill an "abortifacient") to rights for zygotes to no abortion whatsoever—and expect him to fight for his Personhood agenda. And to be re-elected in four years by the extreme-right forces that are behind him now, Trump is going to have to make U.S. Supreme Court appointments who take a hard line on abortion rights. He said it at one of the debates: He would appoint justices who would overturn Roe v. Wade, period: "that'll happen automatically, in my opinion, because I am putting pro-life justices on the court." He predicted that maybe the justices would send the issue back to the states. That would mean that the Mississippi Legislature can force Personhood on Mississippi women, although we handily turned it back.

This is the same Legislature that made a big deal over going after the State’s only Planned Parenthood clinic, in Hattiesburg, even though it doesn’t perform abortions, just providing needed health-care services such as cancer screenings.

If this happens on a national level, women here in Mississippi will essentially be powerless against the forces who do not care whether they live or die while giving birth. Abortion is not an easy decision, nor should it be. My position is pretty much the same as Hillary Clinton’s—it should be legal, safe and rare. She is even more conservative about late-term abortion than Bernie Sanders, saying that late-term abortion should have regulations, but allowing it to save the life and health of the mother, which Personhood supporters would not do.

Like Clinton, I believe in creating alternatives to careless sex and teaching young men and women to value their futures too much to make bad decisions. I dedicate much of my work to the kinds of activities and mentoring that empowers youth women to think for themselves and say no, or at least demand the use of birth control, and that teaches young men to have more respect for young women than to insist on unprotected sex and then take off when she gets pregnant.

The stridently anti-abortion position of Trump’s is simply one of the myriad ways that he disrespects women regardless of political beliefs. Frankly, I doubt he cares who gets an abortion and who doesn’t—morality doesn't seem to be his strong point—but he does want the support of the people who want to ensure that we cannot make such decisions for ourselves. Remember, of course, that this is also a man who has bragged about sexual assault, told multiple children that he was going to date or marry them, walked in on naked teenager beauty-pageant contestants and cheated on every wife, as we know now that the Wall Street Journal has reported an affair 10 years ago that it found that The National Enquirer had covered up for Trump. He was married to Melania Trump by then. He had cheated with his previous wife, Marla Maples, when he was married to Ivana Trump. Multiple other women have made similar allegations.

Oh, and there's that time that he told a TV interviewer that what he and his daughter Ivanka had in common was "sex." She was sitting next to him on the show.

You can’t chalk up any of this objectification of women as youthful transgressions. Trump has done it well into the second half of his life, long after many young players have settled down into a happy marriage and cut out the shenanigans. And of course there are the multiple instances of belittling women’s weight, their beauty, even their menstrual cycles—insults that are very hard for women to look past or imagine for their daughters.

It’s been a tough election cycle for women, and hard for girls to hear these things, and a really bad example for men and boys to follow. I urge Mississippi (and all U.S.) women to think for yourself on Election Day and pull another Personhood, surprising the nation about what is possible here when women and men look past partisan politics at what is really best for ourselves, children and the larger society.

We did it to stop Personhood; it’s time we do it again for a much worse threat to our rights, our nation and the world. Your vote is up to you and you only; please use your power like you did in 2011. So much is at stake in this election for women and girls, not to mention men and boys. Let's vote like our futures depend on it.