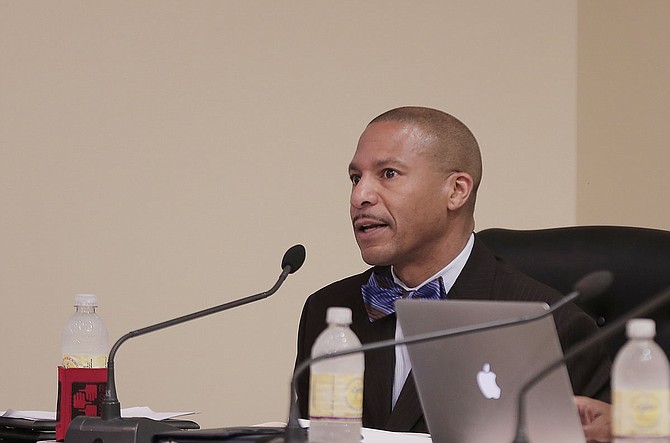 Dr. Cedrick Gray, Superintendent of Jackson Public Schools, says he was furious at the news of the parent with the gun at Forest Hill. Photo by Imani Khayyam.

JACKSON — The auditorium of Forest Hill High School was packed Wednesday night with parents, students and teachers who sounded off to Jackson Public Schools' top administration, airing their frustrations about recent violence and instability at the JPS school.

Though the community chat at Forest Hill had been planned a month in advance, Superintendent Dr. Cedrick Gray centered the conversation on violence and fighting at Forest Hill, following reports of multiple fights from the school, specifically an altercation Tuesday in which the mother of a Forest Hill student brought a gun on campus and brandished it in a fight around the crowd of children.

JPS says the parent did not bring a gun in order to engage with a student, and that, based on the information provided to them at the time, no one available to arrest her was present at the school before she got away. The Jackson Police Department doesn't have officers on site, but responds when called.

Witnesses tell a different story, however. In a video of the fight circulating on social media, the woman, armed with a silver gun, aims the weapon at a child in front of her as another drags her from behind.

Another mother said she was parked directly behind the woman with the gun, and that JPS and Jackson Police Department officials were crowded around both their vehicles while the woman was still on campus—but that she got away, anyway.

The mother of one of the children directly involved in the fight stood up at the community chat to say that by the time she got to JPS immediately following the altercation, the parent with the gun had escaped, and that JPS and JPD officials stood at the fringe of the crowd of children.

Gray says he learned about the after-school fight right after Tuesday's school-board meeting.

"As a parent, I was furious," Gray said. "If you come here and seek chaos, I need to hear from you, because somebody’s not doing their job. And I’m not going to tolerate that one more minute."

Other furious parents at the meeting quickly took the administration to task. One mother mentioned that having a gun on campus is a felony. Another asked how the district would respond to prevent other instances of guns on campus. When Gray responded with the use of metal detectors, the audience erupted into shouts denying that they even worked. Later, students clarified that the metal detector on campus does, in fact, function—but that there's little discretion in stopping students. Security just thinks it's their cellphones. One student, however, said he saw a classmate this semester with a gun in his backpack but was too afraid to tell, fearing retaliation.

Girls basketball coach Lakia Westerfield, who also teaches English, stood up to say that she didn't choose her career in order to break up fights.

"With all these degrees, bow ties and ties and suits, we can't find a solution?" Westerfield asked, gesturing toward JPS administrators standing at the front. "I want to teach. I don't want to fight. I don't want to get shot at."

When asked what the district's long-term plan was for stopping violence, Gray said that the district plans to curb more incidents at Forest Hill by installing more personnel at the school. Starting today, Chief Gerald Jones, executive director of security for JPS, and Dr. Freddrick Murray, chief academic officer for high schools at JPS, will be at Forest Hill by 9 a.m. every morning patrolling hallways. The district also plans to enlist the help of the Hinds County Sheriff's Department, and to hire a new principal for the next school year.

JPS already has seen success in reducing behavior issues with other much less punitive methods. JPS adopted the Positive Behavior Interventions and Supports model, which outlines methods that increase trust between students and authority figures.

It worked at Provine High School. Principal Laketia Marshall-Thomas attributed the behavior and testing gains she’s seen at her school since 2010 to PBIS.

"It's about incentives, expectations, and procedures and routines," Marshall-Thomas said in a November 2015 article for the Jackson Free Press. "Those things will make the biggest difference in your school."

Some students and faculty expressed their frustration at the administration, saying that their emailed complaints to Jackson Public Schools had gone ignored. At the meeting, JPS promised to look into communications issues complaints.

Some attendees also lamented the district's policy on school suspensions, which they felt limited the teachers' and principals' authority to effectively punish those students who cause trouble at school.

But out-of-school suspension and the increased presence of police in school might have the opposite effect of solving Forest Hill’s problems.

“What we know is increasing police presence in schools does not help reduce incidences of violence. On the contrary, schools that have more police increases violence, and suspensions don’t help diffuse conflict in children,” said Sheila Bedi, clinical associate professor of law at Northwestern University in Chicago. Bedi previously worked as an attorney for the Southern Poverty Law Center in Jackson, helping bring research-based juvenile-justice reform to Mississippi.