Cedrick Gray of JPS Named Superintendent of the Year 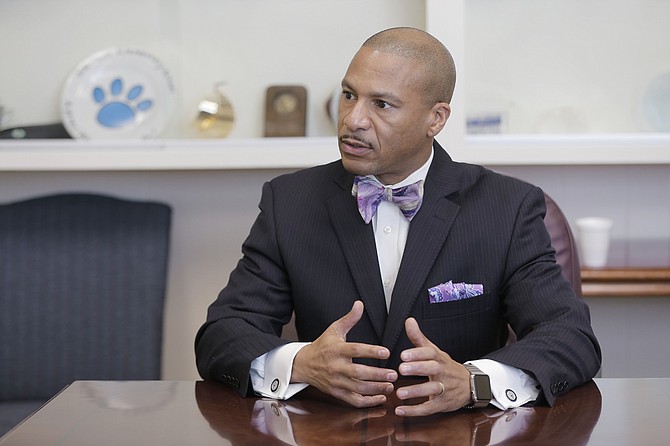 It is an honor that pleases the superintendent, especially in a challenging district such as JPS where he insists on high standards, including "wildly important goals" (WIGS), focused instructional teams (FITS) and attendance, behavior and coursework (ABCs).

It is Gray's ability to lead and build collaborations that makes him stand out, his supporters say. "Dr. Gray has shown bold leadership as superintendent of the Jackson School District by making some very difficult decisions to improve the overall academic environment of the district," Dr. Sam Bounds, executive director of the Mississippi Association of School Superintendents, said in a JPS press release. "He fully realizes the necessity of team building and community support and has always made every effort to garner that support from the parents and city leaders."

"I must say that as mayor of the City of Jackson, my most valued partner in making our City great is Dr. Cedrick Gray and the Jackson Public School District," Yarber said in the same release. "His innovative approaches to education, use of data, and bold approaches to getting this done has inspired me and given me hope that the boys and girls coming through our school system will impact the world."

Under Gray, JPS has seen the growth of school academies, and a consistently climbing graduation rate. JPS officials say the district has gone from eight to two failing schools under Gray's leadership.

But Gray's tenure as superintendent has not been without criticism. Since gaining the position in 2012, Gray's administration over the second-largest school district in the state has seen controversy, from the district's consistent D-rating, reports of violence at schools, and most recently, a threat against its accreditation status due to bleak results from a district-wide audit.

"This award doesn't reflect a snapshot in time," Gray said in the interview. "It is a review of a body of work. If you take a look at the time we've been here that body of work has shown great success and great gains in lots of areas, both academic and operational."

Still, some teachers working in the district have tired of the turbulence. A 2016 BOTEC research team, relying on extensive interviews JPS teachers, reported educator dissatisfaction with discipline procedures they felt district administration had softened. At a Forest Hill High School community meeting this year, after a parent brought a gun to campus following a string of student fights, girls' basketball coach Lakia Westerfield directed her frustration to Gray and other district officials.

"With all these degrees, bow ties and ties and suits, we can't find a solution?" she asked.

Gray acknowledges that JPS must climb uphill to over its problems. "Our scholars have the challenges that exist in every urban area in our country," he said this week. "When you can lead in that school environment there is a sense of accomplishment among us as superintendents. Anybody can lead in good times, but when you can lead the ship through stormy waters—we've come out on the other side of that numerous times in our district."