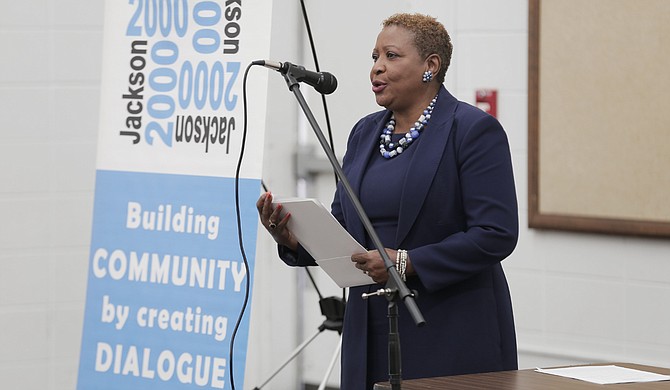 Beneta Burt, president of the Jackson Public Schools Board of Trustees, says the district wants to have a transparent relationship with its parents. Photo by Imani Khayyam.

JACKSON — Though Jackson Public Schools is just a month shy of the Christmas holidays, Superintendent Dr. Cedrick Gray's resignation is effective Nov. 16. In the meantime, however, the Board of Trustees, with members representing each of the city's wards, says it is attempting more transparency and engagement with parents in the school district.

"We thank Dr. Gray for his effort and time in JPS," Burt said at a Jackson 2000 luncheon yesterday at the Mississippi Museum of Art. "But the board has to stay."

Gray's resignation follows a decidedly rocky school year for the district with its troubles beginning with poor results on an audit that included 20 of the district's schools. Failure to comply with 19 of 32 of the state's standards for accreditation for public schools, most of which involved school safety and infrastructure, landed JPS on probation with the Mississippi Department of Education, with the promise of a full audit of the district. JPS had to submit a Corrective Action Plan to the state within 60 days of its accreditation downgrade, which it did. But state accountability ratings that designated the district, and a third of its schools, as failing overshadowed the plan on the same day it came out.

Gray has been shy of the media since the announcement of the accountability ratings. But the board, with the help of Interim Superintendent Dr. Fredrick Murray, a former teacher, principal and chief academic officer within the district, has held meetings across Jackson to discuss the future of JPS with parents and students.

"Our goal is to assure the organizational mission of properly educating children," Burt said at the Jackson 2000 meeting. "We are constantly asking: Are our children learning? Our responsibility is to have results."

Burt said the district will select a search committee comprised not only of district officials but also of parents in order to vet candidates for the position of superintendent "with all deliberate speed." The district has $15 million in its fund balance, "way healthier" than in the past, she said.

The district also extended its vigilance in complying with accreditation standards to non-audited schools, ordering new buses and checking and replacing smoke detectors in every school, she says. Burt says the board realizes the need to hold even more community meetings to get the word out about the district to parents.

"They did not happen overnight," she said about the problems the district faces. "They will not be solved overnight."