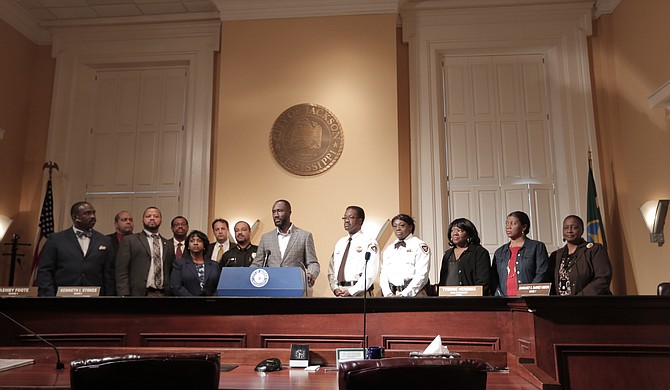 After one of the most violent weekends in the city this year, Jackson Mayor Tony Yarber announced on Wednesday the formation of a Criminal Justice Reform Task Force in a "good faith effort to examine our systems here in the city government and to make improvements that will benefit each and every citizen in the city of Jackson."

"The City of Jackson is excited to announce its Criminal Justice Reform Task Force," Yarber said. "We make this announcement against the backdrop of a heartbreaking four days of violence."

"And we find ourselves four days later, six homicides later, and as a city, frankly, we have had the wind knocked out of us. The sheriff and the chief of police have been working together in tandem. We were able to see crime reduced, and now all of a sudden we see this," he added.

Yarber said that just days earlier he had participated in a "March to Stop the Madness," but that the potential to change the current climate of crime fell to the people, not the elected officials.

"We recognize the need to promote social awareness regarding the causes and consequences of crime. We also further recognize our responsibility for developing strategies for prevention of crime and our need to provide economic and social opportunities for those who have come through the criminal justice system."

"And so we make the conscious appeal today to the moral fabric of Jackson, Mississippi, and the surrounding area to remember that we are people, we are human beings. And there has got to be a level of respect for life that goes beyond being the mayor," Yarber said.

The task force, which the mayor said had garnered around 30 commitments from community leaders, continues to grow in number with interested parties around Jackson. Their goal over the next few months is to work with the Mississippi Urban Research Center to create a "data-driven" plan to address the core issues around crime in the city, including reducing recidivism and providing options for those who leave the criminal-justice system without rehabilitation.

"How do we prevent recidivism? How do we decrease those numbers? This task force is being assembled to not only examine that but after examining that, using data-driven approaches to make decisions and recommendations that will be published," the mayor said.

"After the publishing of these recommendations, we will be asking the media to help hold these groups accountable."

The task force has an April deadline. The chairwoman of the task force, Jackson Municipal Court Judge Gail Wright Lowery, said that the meetings will take place every two weeks and that the group will have to work hard to meet the expectations set by the mayor. The next meeting will be on March 23 at 2 p.m. in the Warren Hood Building across the street from City Hall. It is open to the public.