Big Freedia Back on in Hattiesburg: Names Mississippi a 'Right to Twerk' State 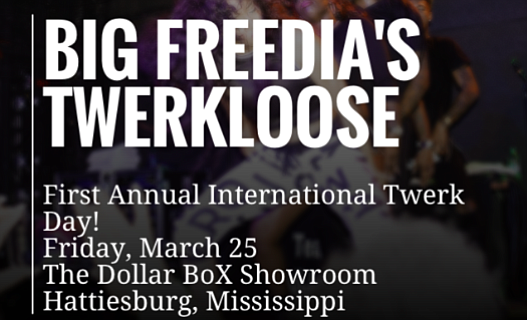 Big Freedia is making the most out of last month's cancelled Hattiesburg show due to the state's response to her twerking. The New Orleans bounce sensation is calling the rescheduled show at the Dollar Box Showroom "Twerkloose" and has christened the date March 25 the "First Annual International Twerk Day."

UPDATE: Big Freedia's manager, Reid Martin, has confirmed that Big Freedia will perform at Martin's in Jackson on March 24, before the rescheduled show the next night in Hattiesburg.

New Orleans bounce artist Big Freedia has survived an effort to keep her off the stage at the Dollar Box Showroom.

Owner Ben Shemper told the Jackson Free Press in February that he had to cancel the show a state Alcohol Beverage Control agent characterized as unacceptable "gyrating." Her manager, Reid Martin, told the JFP on Feb. 13 that Big Freedia was completely supportive of Shemper's decision: “It was so appalling when it happened … and they actually did shut us down. I would have zero problem going to jail a couple days over this, but we’re not about to compromise a venue owner’s livelihood for the next year over this.”

Rolling Stone is reporting today that the show is back on. "I'm just very relieved that the State Alcohol Beverage Control decided my show would not be breaking any laws and we can return," Big Freedia told Rolling Stone. "I got fans in Hattiesburg and I don’t want to let them down. Let the Twerking begin!"

In February, Shempter expressed his frustration in an interview, telling the JFP that the ABC agent said to Shemper that he had seen Big Freedia, who had already performed several times in Hattiesburg, on a YouTube video and that her act's intense "gyrating" was illegal for venues selling alcohol to allow and that Shemper could get in trouble if he allowed the show to happen. The rules, incidentally, also do not allow "best hiney" contests. (The agent did not return messages for a response then.)

The alleged threat infuriated Shemper, who calls himself the “red-headed stepchild” of Hattiesburg, where he grew up. “’It’s Footloose’ is what I told him when he called me. “But he didn’t get the joke. But that’s what it is.” In the film “Footloose,” a small town bans dancing, leading to a dance-revolt by young people.

Reid Martin, the manager for Big Freedia, told the Jackson Free Press in February that he and the artist were discussing doing a “Footloose”-themed show back in Hattiesburg, as soon as they get the controversy worked out with the State and can reschedule the show. It is worked out: Big Freedia will return to Dollar Box Showroom on March 25 in a show called "Twerkloose in Mississippi."

Big Freedia is calling Mississippi a "right to twerk state," and has named March 25 the "First Annual International Twerk" Day.