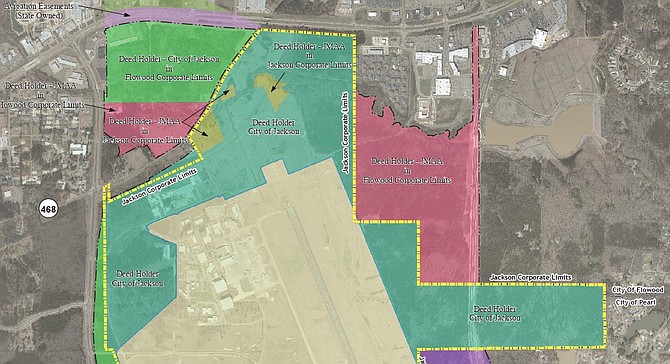 The above map displays tracts of land controlled and opened by the Jackson Municipal Airport Authority and the City of Jackson. The East Metro Parkway is adjacent to the right of JMAA land (the large pink area) that Entergy recently certified as shovel-ready land for development.

JACKSON — The full Mississippi Senate got its last chance to change its mind on the Jackson airport "takeover" bill today (March 7) at 4 p.m., as allegations swirl that the effort is more about controlling valuable land around the airport than improving operations of the airport. The bill, passed Thursday, was held then on a motion to reconsider. The Senate voted today to table the bill to reconsider. Now the bill, as passed, to continue on to the House of Representatives.

Arguing to reconsider the bill, Sen. John Horhn, D-Jackson, told the chamber, "If you're trying to attract greater development, this isn't the way to do it.' He also said, "I would like you to think long and hard about what we're about to do."

Sen. David Blount, D-Jackson, also argued against the bill. "It takes away the airport from the public entity that bought and paid for it," he said, but to no avail.

The Jackson Free Press originally reported Friday night that the Mississippi Senate’s so-far successful effort to wrest control of the Jackson Municipal Airport Authority could be more about control of land than airport operations, at least according to Jackson City Council President Melvin Priester Jr.

“This land has become increasingly more valuable with development opportunities,” Priester told the Jackson Free Press the night before the bill passed the state Senate Friday. “You give the governor, his team (and) the Mississippi Development Authority the opportunity to cherry-pick their partners for deals that would be very lucrative.”

JMAA directly controls the majority of land that borders the East Metro Parkway in Rankin County, and the development of that land could hinge on the decisions the JMAA board will make in the future.

“What's changed is that there is a new road that cuts straight through the City’s and airport's property on the east side of the airport. Because of this new road, all the City land that was useless is now ripe for significant development,” Priester wrote on Facebook Friday. “…The East Metro Parkway has been in the works for decades but only really got interesting in 2011.”

A major reason is the parkway’s ability to redirect where people go, and where they spend money. “As everyone involved recognizes, the East Metro Parkway will fundamentally shift traffic patterns in the area. For example, for people coming to Highway 80 to go shopping at Dogwood, they can take this parkway up instead of battling Lakeland traffic,” Priester wrote.

Tom Troxler, head of Rankin First, the county's economic-development group, acknowledged how lucrative the land near the parkway could be back in August 2011. "The economic impact of East Metro Parkway could be huge, with roughly 1,000 acres along its length potentially open for some type of development. It touches all three cities (Flowood, Pearl and Brandon)," Traxler told The Clarion-Ledger then. "It will be an extremely valuable (asset). It opens up a vast amount of property."

The MDA’s website lists Rankin First executive director Tom Troxler as the first contact for any discussions of use of the land. The Rankin First organization is a development-centered extension of the MDA in the area and has no official connection with the land, whether governmental or as an owner or leasing agent for the property. Neither the MDA or Rankin First lists any members of the JMAA, the administration of the airport, or any leadership of the City of Jackson as points of contact for the land. Troxler did not immediately return calls today.

This potential for lucrative development dollars and the resulting influence of such deals could explain the recent legislative interest in the JMAA by Rankin County representatives.

The bill, as passed by the Senate Friday, includes Mississippi Development Authority representation on the board as well as representatives hand-picked by the governor. Entergy has certified the 200 acres of land directly west of the East Metro Parkway, under the direct control of the JMAA, as “shovel-ready,” which means that it is prime location for industrial development under the company’s strict qualifications. The East Metro Parkway runs south from Flowood and Lakeland Drive to connect to El Dorado Road in Pearl. So far, the multi-stage project that began in 2013 is funded from a significant amount of federal dollars and other sources, including contributions from the JMAA.

But right now, MDA, Rankin County, Flowood and Pearl would not have a seat at the table because they do not own the land. And it is a tract of land they have been eyeing ever since the East Metro Corridor Project began, for good reason, considering that the roadway will connect Lakeland and Flowood to Pearl. Development, such as The Blake retirement community, has already expanded into land JMAA does not control that lies just south of Lakeland.

If the airport bill becomes law, the influence that the City of Jackson would have over any development deals could pale in comparison to the power Rankin County and state interests would yield. Jackson leaders, such as Priester, say this could make it harder for Jackson-based businesses to reap the benefits.

“Because the appointees to the board are Jacksonians and are accountable to the people of Jackson, I know that they care about the things that matter to future of the City of Jackson,” Priester wrote on Facebook. “For example, I know that the board as it is currently composed will do things like make sure that when people try to develop the property that the City owns along the parkway, some of the jobs and contracts go to Jacksonians. Because the appointees to the board are Jacksonians and care about Jackson, I know that if a project on this City land may hurt other City interests, they won't do the project or will push to do the project in a different way.”

To Priester, the airport “takeover” is about land and, ultimately money. “So, at the end of the day, this matter has nothing to do with who runs the day-to-day operations at the airport and has everything to do with who controls the development opportunities, jobs, and contracts associated with hundreds of acres of land in one of the most valuable areas of the State of Mississippi,” the council president wrote on Facebook today.

Sen. Josh Harkins, R-Flowood, the airport bill’s author, did not return calls for comment today. Harkins—who owns real estate and construction businesses in a Flowood office he shares with his father, Rankin County GOP Chairman Gary Harkins—has repeatedly insisted that his bill is to improve the airport itself. On the Senate floor yesterday, he emphasized that he was not pushing for the board change because the airport was doing poorly, but because it could be better with what he calls a more regional approach.

“I think you wind up having more resources pulling for the airport—Rankin County can’t even bond for an economic-development project, if they wanted to,” Harkins said.

Priester pushed back on Harkins’ assertions Friday. “This hostile takeover isn't at all about managing the day-to-day operations of the airport (if it was, the bill's backers could point to actual problems with airport operations, which they haven't done),” Priester wrote. “This is a fight over money. More specifically, this is a money fight over the development of land.”

Priester ended his post: “Wanna know why Rankin County Republicans are making this gangster move right now? This is not about who awards the contract for airport attorney or who will be the concessions vendor at the Delta gates. Legal fees at the airport are small potatoes, and Southwest ain't coming back because someone from Rankin County is now a board member. This is all about the East Metro Parkway.”

The Jackson Free Press left multiple message for leaders involved in the East Metro Parkway project that have not been returned as of 1 p.m. Monday. Sen. David Blount, who spoke against the "takeover" bill Thursday, did not return calls for this story todday, but retweeted the original story over the weekend, calling it "Important story about hostile takeover of Jackson airport." This morning he tweeted, "Jackson will fight to defend our rights and our property."