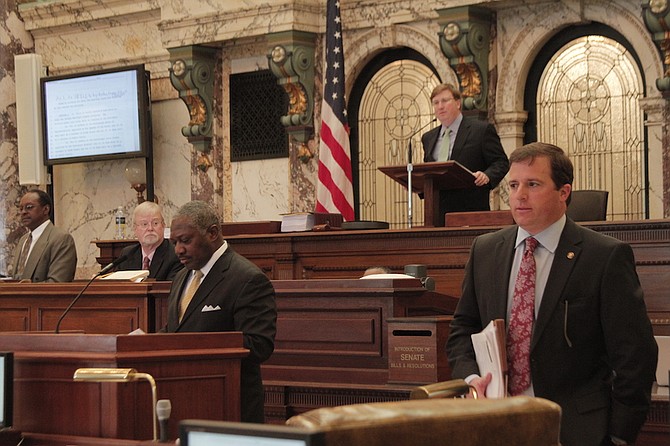 JACKSON — More than two hours of debate and six failed amendments later, the Jackson airport “takeover” bill passed the Senate by a vote of 29-18 today, leading critics to slam it as a "hostile eminent-domain taskeover." Sen. John Horhn, D-Jackson entered a motion to reconsider on the bill after its passage after trying multiple times to add amendments and to reason with with legislators set to pass the bill.

All four Jackson senators hotly contented the bill, with each speaking against the bill at some point during debate. The bill, authored by Flowood Republican Josh Harkins, would change the governing board of the airport—allowing Rankin and Madison County Boards of Supervisors to have commissioners on the board as well as the Mississippi Development Authority, the Mississippi National Guard and three at-large members the governor and the lieutenant governor choose.

Harkins maintained all throughout debate that the bill was not a “takeover” of the City of Jackson’s land and property—although they do own the land that the airport sits on—but instead said that all his bill does is expand the board and take a regionalization approach.

Jackson senators pushed back, asking why there is a need to change the airport’s governing authority. Harkins said that while he doesn’t think the airport is doing poorly, he said there’s room for improvement.

When pushed further for questions about his first amendment to the bill, which allows the mayor of Jackson and the Jackson City Council to each pick their own commissioners (not the governor picking from their recommendations), Harkins said he’ is not condemning the current board at all, but believes that having representatives from multiple counties on the board will help development.

“I think you wind up having more resources pulling for the airport—Rankin County can’t even bond for an economic-development project, if they wanted to,” said Harkins, who works in real estate in Flowood, near the airport.

Sen. Horhn presented a succession of five amendments on the bill: one to create a task force to study the Jackson airport to see how development can improve and another that would require the state to pay the City of Jackson $96 million if the bill became law for the “takeover.”

“If this is about development, let’s create an airport development council,” Horhn told the Senate.

Sen. David Blount, D-Jackson, also presented an amendment on the bill, calling it bad legislation. “Josh Harkins is not a racist; he’s just the author of a bad bill,” Blount said.

Blount’s amendment suggested a “regional approach” to take Shiloh Park from the City of Brandon and give it to the State of Mississippi; it was ruled not germane by the Senate’s counsel, but Blount’s point remained the same.

“If the state can take this from us (Jackson), it can take something from you,” he told the Senate.

After the Senate adjourned, Blount told the Jackson Free Press that he and other Jackson senators will fight the table of the motion to reconsider, which they expect to happen tomorrow, and said representatives in the House will also work to fight the bill from becoming law.

Regina May, an attorney for the Jackson Municipal Airport Authority, said the bill’s passage’s was a disappointment but that Jackson senators aptly stated how the airport “takeover” would affect the city.

“We considered this a hostile eminent-domain takeover; it is fashioned as a situation where nothing changed, but it is a distinction without a difference—it is still a taking,” she told the Jackson Free Press.

May said she and her team are gearing up for a legal battle, but the bill still has to pass through the House unscathed to become law.

Mayor Tony Yarber, who attended a campaign event with former President Bill Clinton during the Senate debate on the airport, later sent a statement lambasting the passage of the bill. "[W]e, the Capital City of the State of Mississippi, are also dismayed and disheartened by the blatant abuse of power that some legislators have taken in an attempt to strip away power that rests within the hands of our citizens who made the sacrifice of investment in our municipal airports over 60 years ago," Yarber wrote Thursday evening in the statement. "Sadly, we are once again reminded of the divisive abuse of power by some elected officials who would deprive Jackson of such rights. We will continue to work with our state representatives to ensure that what is best for the City of Jackson is the focus and remains at the forefront of the conversation.”

The vote on the bill was essentially along party lines and passed 29-18.

For history behind the airport “takeover” bill visit jfp.ms/airport.