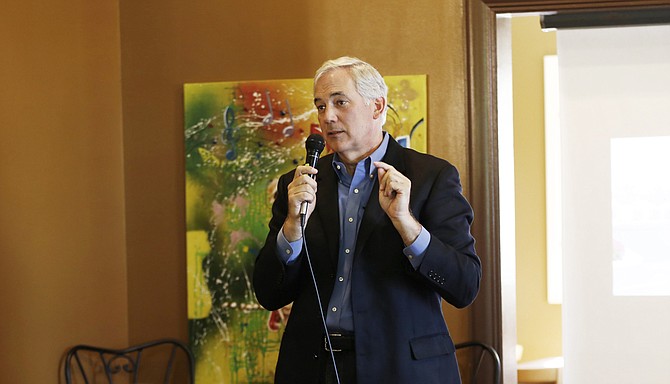 Jackson developer Roy Decker had a potential investor leave after the 2016 Legislative session and House Bill 1523 was signed into law. Photo by Imani Khayyam.

JACKSON — Roy Decker felt the financial consequences of House Bill 1523. Decker, a Jackson developer and architect, says a potential investor pulled out of a project earlier this year, largely because of the new Protecting Freedom of Conscience from Government Discrimination law.

Decker said the investor's name was confidential, but that he or she had previously been a pro-Mississippi businessperson whom Duvall-Decker had worked with before. They were frustrated by the bill and the general climate of the state, Decker said.

Lots of business people, Decker says, are concerned about the impact of the bill on economic development and growth in the state. "If we're not promoting business that generates taxes and revenue and the ability for us to pay for services, like education, if we're doing things to thwart revenue and taxes, what kind of sense does that make?" he said in an interview.

Duvall-Decker is not the only business that has taken a hit. Linda Hornsby, executive director of the Mississippi Hotel and Lodging Association, said some of the association's 350 members have lost business due to House Bill 1523.

"We have received reports of lost or cancelled business because of it (HB 1523)," Hornsby told the Jackson Free Press.

Back in April, the Mississippi Tourism Association reported immediate cancellations as a result of House Bill 1523. "Our members statewide are reporting calls, emails and social media posts from people cancelling or postponing trips to Mississippi due to national media reporting on this new law," the association said in an April 7 statement. "Many of these tourists are known to our members personally because they are repeat guests that have visited our state before, loved it, and have become regular visitors."

The association represents museums, cities, counties, media organizations and other agencies around the state that contribute to the state's tourism industry.

In April, actress Sharon Stone moved the location of her film "The Principal," WLBT reported, due to the religious accommodations law. "I will not work in any state that holds or is actively creating laws to legally support discrimination against American citizens whether due to their race, religion, gender or sexual orientation, nor where those laws are passed or approved by the government of said state," Stone wrote in a statement to Mississippi Film Studios President Rick Moore.

Stone and the producers chose another location for the $300,000 production, WLBT reported.

The Mississippi Hospitality and Restaurant Association worked quickly after the passage of House Bill 1523 to create the "Everyone's Welcome Here!" campaign, which created a directory of restaurants across the state that are committed to serving all guests. The list is available at www.msra.org/welcomelist.html.

Jackson-based attorney at Bradley LLP Will Manuel represents companies in employment discrimination cases, and he says that House Bill 1523 "suffers from really bad vagueness issues." Manuel says the bill has phrases that make it hard to determine how a court will interpret it.

One section of the bill—Section 5—allows any person (or business) who feels his or her religious belief has been violated to use House Bill 1523 "as defense in any judicial or administrative proceeding without regard to whether the proceeding is brought by or in the name of the state government, any private person or any other party."

The last part of that clause, Manuel says, opens up the question of the bill actually being "limited legislation." A business could fit the definition of "any other party," and thus could use House Bill 1523 as a defense for firing someone due to a "sincerely held religious belief ... that marriage is or should be recognized as the union of one man and one woman."

"Because now you permit every business, as far as an employer, to say, 'I'm going to use 1523 as an affirmative defense to defend against any wrongful termination acts,'" Manuel said. "And I don't know how the court's going to hold that up."

Mississippi is an "employment at will" state, which means that as long as an employer does not discriminate based on a protected class in Title VII or other federal employment regulations, they are allowed to hire and fire employees at will. Mississippi is one of three states in the nation that does not even have state employer discrimination statutes, Mississippi Equal Employment Opportunity Commission Director Wilma Scott says. That means any person in Mississippi filing suit against their employer for discriminatory reasons has to make a claim with the EEOC.

Title VII of the Civil Rights Act of 1964 prohibits employment discrimination based on race, color, religion, sex and national origin. Sexual orientation and gender identity are not included under Title VII technically, but since 2012, the EEOC adopted the view that "coverage of lesbian, gay bisexual and transgender individuals under Title VII's sex discrimination provisions, as they may apply as a top Commission enforcement priority."

Scott said her office cannot take and litigate every complaint or case that gets sent to the Mississippi EEOC office, but if they find a violation, a person would get a notice of rights that allows them to take their case to federal court, within six months, if they have the wherewithal to hire their own representation.

Harriett Oppenheim, an attorney in the Jackson EEOC office, says federal law trumps state law and that while Title VII does not specifically list sexual orientation, a lot of workplace discrimination based on it could be classified as a "sex" discrimination.

"Often times, people who are gay or transgender are often discriminated against for their sex, due to social norms to act like a man or act like a woman, and that's a violation," she told the Jackson Free Press.

Oppenheim says discrimination is often based on stereotypes like "oh, he acts like a woman, he must be gay" But, if employers think they know an employee's sexual orientation or gender identity based on stereotypes, that's a violation of Title VII, she said.

Several cases are pending in federal district courts around the country with similar circumstances of discriminations against employees who identify as lesbian, gay, bisexual or transgender.

Manuel said several of his clients have asked him how House Bill 1523 affects them. He is not advising clients to use it as a defense when making hiring and firing decisions because he believes that House Bill 1523 is unconstitutional on its face because it offers protection for only three specific religious beliefs.

"The problem with the bill overall is I think it's facially unconstitutional because it only protects certain types of religious thought," Manuel told the Jackson Free Press.

Three legal challenges to House Bill 1523 are pending in federal court now, and the bill is set to become law July 1.