The Next Fight: LGBT Workplace Rights 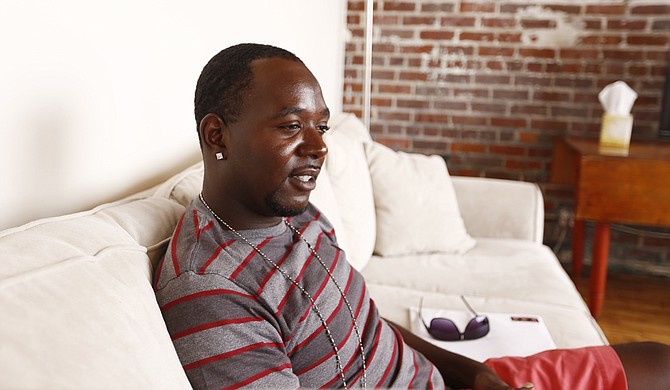 Lavell Brown filed a discrimination lawsuit in federal court after the Equal Employment Opportunity Commission issued him a right-to-sue notice in February. Photo by Imani Khayyam.

Lavell Brown needed the second job to keep up financially. He was already working at UPS and attending classes at Jones County Junior College, but his father had been diagnosed with stage-four cancer, and the pressure weighed on him.

A friend offered Brown a solution in the form of another job—Subway, where he could pick up hours he needed. What sounded like a solution turned into a nightmare, however, that has changed the course of Brown's life.

Brown is gay, but he had never felt the need to make that publicly known because it was his own business, his life. Brown, 31, lives in the small town of Heidelberg but commuted to the Subway in Hattiesburg.

Brown's lawsuit alleges that management repeatedly referred to Brown as a woman.

"On one occasion, for example, an employee commented that 'We have a man working here now,' and management said aloud 'That's not a man, that's a woman,'" the complaint states.

Within the first month of working at Subway, rumors about Brown's sexual orientation began to swirl.

"The females would go home and tell their male boyfriends that I was gay, so it was basically like I was outed," he said. "I had to come out to my family and everybody about this because no one knew about me because I keep my business to myself."

Brown didn't want his family to hear rumors first, so he decided to sit down and tell them that he was gay, and his mother did not take it well. Brown said his mother was aware that something was wrong, and that he hadn't been acting like himself since he started working at Subway.

"She was crying all the time," Brown said. "She would say things like she always wanted me to produce a grandchild for her."

Meanwhile, at work, the discrimination continued, perpetuated by his managers who continued to call him a "he/she" to his face and in front of customers, the complaint says, which represents one side of a legal dispute.

"They treated me like I was dirt or something because like I was beneath them just because I don't like sleeping with females, and I don't really understand that," Brown said.

Brown was the only man who worked at the store, but he did not understand why that meant he should be targeted. He said that even if one of his co-workers were a lesbian, he wouldn't treat them any different.

"You never know how people think of you and what a person would do to you just for not being the way that they want you to be," he said.

Brown felt trapped in his job because he needed the money, and he couldn't complain to his managers about the discrimination since they were perpetuating it themselves. He worked at the Subway from Aug. 26 until Oct. 20. He quit when he could not take the treatment anymore. He continued to take care of his father, who took his son's outing better than his mother.

Eventually, Brown's relationship with his mother improved, but his father's health did not. In May, his father passed away.

"My mother, she treats me like she treated me before she found out—now she's OK with it and treats me like I'm her son; now we have a mother-son relationship," Brown said in an interview.

After he left Subway, Brown filed a charge of discrimination with the Equal Employment Opportunity Commission (EEOC) that issued a notice of his right to sue in February. Brown accordingly filed a lawsuit in the U.S. Southern District Court in May.

The Subway Sandwich Shop of Laurel Inc. filed its response to the Brown complaint on July 22. Through attorneys, the business makes a number of defenses, including that Brown failed to meet the procedural prerequisites to Title VII and that Subway acted in "good faith and without malice" toward Brown. The lawyers at Copeland, Cook, Taylor & Bush, who are defending the company, did not respond to voicemails or emails.

A Case with Potential

Brown's lawyers, Trey Waterloo and Heather Martin, said the timing for the case is good because of the U.S. Supreme Court decision affirming same-sex marriage in June.

While some legal scholars say that case does not offer protection against workplace discrimination, other experts believe that LGBT people are already protected under the Title VII of the Civil Rights Act of 1964. That law protects a person from "discrimination based on race, color, religion, sex, or national origin." However, the federal courts have not issued a definitive ruling on how this law protects members of the LGBT community in the workplace.

Since the legalization of same-sex marriage with the U.S. Supreme Court's ruling this past summer, LGBT advocates have voiced concern that workplace discrimination is the next hurdle their community faces, especially since sexual orientation is not a protected class in Title VII. Martin said EEOC's filing implies that a new class does not need to be created in order for a person to have the same protection.

The timing of the new EEOC filing makes it possible for the court to use sex as a protected class in Brown's case. The case was filed less than two months before the EEOC filing came out, and Waterloo and Martin say they are confident that their case is on point factually to give the court the opportunity to rule that discrimination based on sexual orientation can be ruled illegal on the basis of sex in Title VII.

Brown filed his suit without any knowledge of the EEOC's filing, and he just hopes that justice is served in his case.

"I would hope that people would think that they don't have to be scared to come out about something that they know is not right, if you feel like you're not being treated right, you need to stand up for what you believe in."

Brown's case is in the discovery phase and likely will be until spring. If the case cannot be resolved out of court, a trial date could be set for fall 2016.