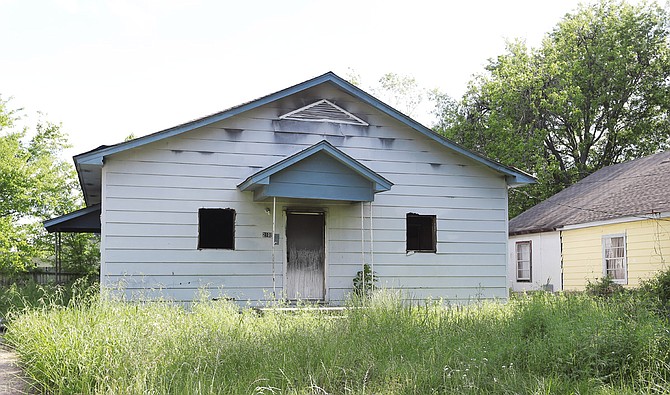 Ward 2 Councilman Melvin Priester Jr. wrote a resolution that passed unanimously, urging more cooperation with the State of Mississippi to add additional blighted properties to the Neighbor’s First program. Pictured is an abandoned home at 2101 Florence Ave. in the Washington Addition. Photo by Donna Ladd.

JACKSON — The City of Jackson took steps last week to prod Secretary of State Delbert Hosemann's office to include some of the more than 3,000 properties under its control to the list of qualified lots under the Neighbor's First program, the City-run effort to sell surplus property to qualified residents for as low as $10.

The Jackson City Council unanimously passed a resolution during its regular meeting on July 14 to recognize "that the success of the Neighbor's First Program depends on the Governor and the Office of the Mississippi Secretary of State agreeing to make available to this program some of the thousands of blighted and abandoned properties in the City of Jackson the State of Mississippi has title to ...," the council-approved resolution states. 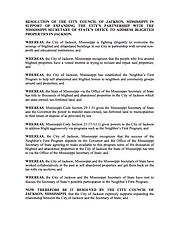 Ward 2 Councilman Melvin Priester Jr., who authored the resolution, said representatives from both the City and the secretary of state's office met last week to discuss further cooperation, encouraged by past partnerships between the State and Jackson.

"The secretary of state's office has cooperated with us, and we appreciate very much their cooperation," Priester said during the meeting, adding that he wished now that the resolution would "push" the state to add its properties to the pot.

"If they participated in this program, it would be something huge for the City of Jackson," Priester said.

Where the Complications Are

State statutes outline the authority to transfer land ownership from the State to the municipalities.

Mississippi Code 29-1-51 and 21-17-1 subsection 11, the two statutes that work together to make the transfer of land possible, give the authority first to the secretary of state or the governor to give or sell the land to the City, and then grants authority to the City to dispose of the property "because the property was abandoned or blighted."

The first statute even has a provision that the land does not have to be sold to the municipality.

"As an alternative method to disposing of tax lands situated within a municipality, the Secretary of State, with the approval of the Governor, may transfer those lands to the municipality, which then may retain or dispose of the lands as provided by law," the statute states.

If the state agrees to the transfer, the City would place the properties into the Neighbor's First program, which gives adjacent owners to blighted property the opportunity to purchase the lot for prices as low as $10. Von Anderson, the head of the City's program, told the council that he would soon put the applications he has received from residents before the surplus committee for consideration.

"We are in the process of doing that," Anderson said during the council meeting. "We had 63 applications that were for Jackson properties."

Anderson said the 33 applications the City received were for state-owned properties. "But the state properties, that is a different story," Anderson said. "That's where the complications are."

He tried to give some insight into why the State might hesitate on the transfer of the property, focusing on the revenue that the involved parties, such as the secretary of state through sale of the property and the school board through property taxes, might lose if they "gave it away at a discounted rate."

"I think that may be where the trepidation is, honestly," Anderson said.

The secretary of state's office did not respond to messages by press time.

A study by Los Angeles-based company BOTEC Analysis and paid for by the State of Mississippi examining the sources of crime gives some explanation for the vast proliferation of blight in the city.

"We were told," the BOTEC team sent to tour Ward 3 in Jackson in 2015 reports, "that in many instances, heirs do not bother to claim a property after the death of the homeowner, a phenomenon attributed to lack of economic opportunity in the area as well as the devaluation of real estate. Essentially, people told us, there is no reason for family members to obtain the title and attempt to sell a house is this part of town."

"Although there are statutory processes for the city or state to take title of these structures and destroy them or render them safe, the volume of dilapidated buildings is overwhelming," the report continued.

Mayor Tony Yarber took a different tack with the money issue, highlighting the burden the blighted property placed on the City of Jackson.

"What I think Mr. Anderson is saying, at the end of the day it is just about control and the attempt to control money," Yarber said. "We are cleaning all of their properties, so it doesn't matter if they hold it for 48 years or for 50. They still, if they make $600 on it, that is $600 they haven't spent anyway."

The mayor said he appreciated the council's effort but that he was not sure how much assistance it would lend the effort in the end.

"I appreciate the item on the agenda because it would assist us to try and get more property out there for our citizens to get their hands on. I don't know what that does to help us to move forward, but we are ready," he said.

Priester reiterated his point then that if the City is going to make progress on addressing the blight, it would have to be in cooperation with the State, whether the secretary of state or the governor.

"We are quickly going to hit a brick wall. We know our people want this land because they have started asking to purchase state-owned land even though it's not in the program," Priester said.

"We have to keep pushing it."

Jim Johnston, director of the nonprofit Revitalize Jackson, told the council that if the City was able to secure some of the blighted property, his organization could take care of the clearing of the lots, saving the City much-needed capital.

"We have the capacity to do 500 demolitions and clear an additional 1,000 lots with the funds and capacity we have," Johnston said. "It could flip the pancake of Jackson. In other cities, if you can clean up the blight, get new ownership of the lots, everything changes."

The BOTEC reports outline how abandoned housing can pose a threat to safety in a community, even encouraging the drug trade.

"These structures create serious public safety risks since they can be used as centers for illegal activity, as well as treacherous playhouses for children," the study states. In a later part of the report, they outline how those in the drug trade take advantage of the combination of low housing prices and economic desperation of low-income areas of Jackson.

"These houses, law enforcement officials said, were purchased and maintained for the drug trade," the report states. "According to residents, abandoned homes may be purchased for as little as $2,500 to $5,000, making it affordable for gangs or groups to set up shop."