A GOP Supermajority, Slavery and an Embattled Flag 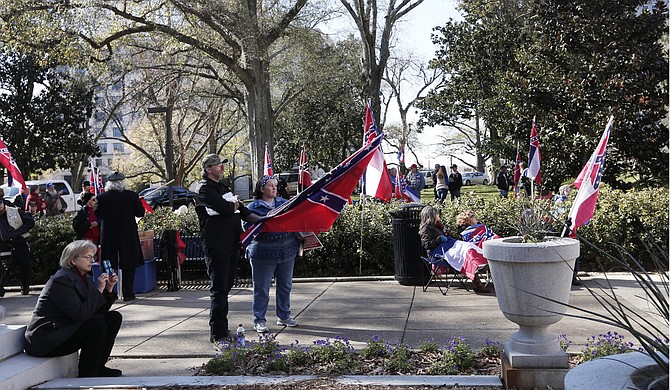 Several pro-state-flag organizations including the Magnolia State Heritage Campaign and the Dixie Alliance held a rally outside the capitol on Jan. 19 to “save the state flag.” Photo by Imani Khayyam.

Only a day after Martin Luther King Jr. Day, Mississippi flag supporters converged on the capitol in downtown Jackson to send lawmakers a message: Don't meddle with the state flag. The main event organizers, the Magnolia State Heritage Campaign and the Dixie Alliance, support Initiative 58, one of three ballot initiatives on file in the Mississippi secretary of state's office that seek to make the current state flag permanent by changing the state constitution.

Ray Shores, who lives in Yazoo County and is a member of the Dixie Alliance, said he and flag supporters have challenged House Speaker Philip Gunn, R-Clinton, to a debate on the issue. Gunn was the first prominent Republican in the state to call for the flag to come down last summer, which did not bode well with flag supporters who call Gunn's statements "left-leaning" on the website mydixie.org.

Shores said the people of Mississippi voted to keep the state flag just recently. "Fourteen years isn't that long of a time, so people still feel like the flag should remain," he said. "I can't find hardly anybody that wants to change the flag."

He would not have to look farther than Jackson where the "1 Flag for All" campaign began. Sharon Brown filed Initiative 55, which asks that all references to the Confederacy be taken off the state flag. Brown's campaign rallied at the capitol last October. Some rumors about flag legislation circulated before the session began, but the governor has said he intends to leave it to the will of the people.

Still, on Jan. 26, state Sen. John Horhn introduced a bill to redesign the state flag by 2017, when Mississippi celebrates its 200th birthday.

Inside the capitol, Rep. Willie Perkins, D-Perkins, sponsored a bill that would apologize for Mississippi's role in slavery. The bill was referred to the House Rules Committee, but not ruled on by the end of the week. Perkins' bill states that "an apology for centuries of brutal dehumanization and injustices cannot erase the past, but admission of the wrongs can speed racial healing and reconciliation."

It turns out that drawing the longer straw isn't always enough to settle a tied election outcome, and the House voted 67 to 49 to unseat Eaton after three and a half hours of back-and-forth between Baker and Democratic attorneys.

The House relied on the special election committee's report and testimony from Baker that five of the affidavit ballots should have been disqualified because voters violated a part of Mississippi law that requires voters to notify their county clerk if they move more than 30 days before an election.

After two days of testimony from "five or six" witnesses, the House special election committee voted 4-1 to disqualify five of the affidavit ballots counted in the District 79 race, which was decided in November by drawing straws, as state law requires. By disqualifying five votes, the race was not technically a tie because, Baker said, even if the remaining four votes were for Eaton, Mark Tullos, the Republican challenger, would have won by one vote.

Tullos had disputed the election the day before the straw-drawing, leading House Speaker Gunn to appoint a committee to resolve the election contest. Rep. Linda Coleman, D-Mound Bayou, the only Democrat on the committee, voted against the resolution that she says she had no input in creating. Coleman said Baker came with the resolution on Wednesday morning already completed.

"It appears that we may have gone into these proceedings with the outcome already known," Coleman told the Jackson Free Press after the committee passed Baker's resolution.

"Going into it, I had hoped that these proceedings would be fair and impartial, but what I've seen today is the law actually turned on its head where we can disenfranchise voters for partisan purposes—I had hoped for something better."

The committee's resolution reached the wrong legal conclusion, Coleman said. She feared the wide-ranging implication for the voters in Mississippi using affidavit ballots. Coleman believes that the committee did not apply election law correctly, especially because an attorney for the secretary of state, Kim Turner, had testified that the affidavit ballots were counted correctly.

Coleman seemed to know, like Eaton did, that the committee's vote was the green light needed for the majority Republican House to unseat the Democrat. Eaton's speech in the midst of the three-hour-plus session that afternoon sounded much like a swan song, despite his fellow Democrats defending him (and voters' rights) with 10-minute arguments.

Eaton, who has served in the House of Representatives since 1996, knew he was at the mercy of the majority in the House, and he expressed regret that Tullos did not live up to the agreement of the straw-drawing and its outcome.

Eaton's family sat in the left gallery, as the longtime representative got emotional in what turned out to be his farewell speech. Tullos and his lawyer sat in the opposite gallery, and at times Tullos would use his phone to capture the action down below.

"I will survive any political death cast upon me," Eaton said before leaving the floor to regain his composure.

He left to a standing ovation from both Republican and Democratic representatives alike.

No argument—even saying that disenfranchising five voters violated the Help America Vote Act—could save Eaton. House Democrats expressed visible frustration as the Republican Party gained a supermajority and a road to pass any legislation it desires.

The Mississippi chapter of the NAACP released a statement following the House vote that said the House vote corrupted the election process. "Today's vote in the House of Representatives is a gross interpretation of Mississippi Election law and seems to violate Section 2 of the Voting Rights Act," the statement said.

Eaton cannot take any federal action to get his seat back, and now the only possible way the results could change would be for one of the five voters filed a lawsuit under federal voting laws. But that could take a long time and might not produce results since state legislative bodies reserve the power to seat their own members.

A day after Eaton lost his seat, Secretary of State Delbert Hosemann announced several proposed revisions in Mississippi's election law. Several changes will apply to pre-Election Day voting including a 21-day no-excuse period for citizens to cast their ballot before Election Day in county courthouses. His new rule will eliminate the need for in-person absentee voting.

Rep. David Baria, D-Bay St. Louis, asked that the House adjourn in memory of Hosemann's new rules on Jan. 21. Democrats might be outnumbered by one more now, but they're not going to remain silent.

Read the JFP's stories about slavery, secession and the Civil War in Mississippi, including links to primary documents.